The Ice Cube melted Sunday morning as the sun was rising over downtown Atlanta.

Actually the Ice Cube was imploded with 500 pounds of explosives which brought down the 14-story building in less than 33 seconds.

demo of archives from SaportaReport on Vimeo.

The 52-year-old former Georgia Archives building had turned into dust.

It was a first time implosion experience for Gov. Nathan Deal and Steve Stancil, the executive director of the Georgia Building Authority.

“It was impressive,” said Deal, who previously had only seen implosions on television or the movies. He specifically remembered seeing footage of when the Atlanta Fulton County Stadium came down shortly after the Olympics. “I didn’t see that in person. This was very impressive.”

A few days before the implosion, the Georgia Archives is a building on death row (Photo by Kelly Jordan)

The Georgia Archives Building, a windowless white marble rectangular box, was designed by A. Thomas Bradbury, who designed many of Georgia’s government buildings. The building opened in 1965 to house the state’s recorded history.

But it was closed in 2003, and the Georgia Archives were relocated to Morrow.

The state said the building was settling and would be too expensive to secure.

The empty box then became a favorite for Georgia’s movie industry, a one-of-a-kind movie set that was busy making money for the state.

Before the implosion, my son, David Luse, who scouts and manages locations for movies and television shows, told Deal how much he appreciated the governor’s support of the movie industry. And then he told Deal how he had loved working on shoots at the Archives building.

Deal told the crowd gathered at 6 a.m. on a cool Sunday morning in March that he usually attends ground-breakings and ribbon cuttings. So an implosion was a historic occasion for him.

It also was a historic day for Devin Simmons, a five-year-old boy who suffers from sickle-cell anemia and receives blood transfusions from the Children’s Healthcare of Atlanta.

Simmons helped set off the charge that triggered “Fire in the hole” and a series of explosions and flashes – and that caused the building to fall into itself into a hole that soon became a pile of rubble. 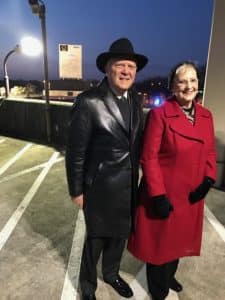 It just so happens that Simmons father – Dameon Simmons – is a captain in the military, and his specialty is demolition. Like father, like son?

An implosion is like watching history being erased complete with all the sensations one feels while watching fireworks. If you’re close enough, you can actually feel the boom of the explosions.

“That scared me,” said Cristal Stancil, the wife of Steve Stancil. “I jumped.”

She was not alone. Steve Stancil said it made him think of the Twin Towers going down in New York City on 9-11.

Asked how he felt about his first implosion, Stancil said he was excited – looking forward to the “greatly-needed” Georgia Judicial Center that will be built on the site of the Archives building.

Then he looked up to the pedestrian bridge that goes from the state parking deck across the street.

“My next project is going to be taking down that bridge,” he said.

Devin Simmons stands next to Gov. Nathan Deal – getting ready to set off the implosion – as his father, Dameon Simmons, looks on (Photo by Kelly Jordan)

Also looking ahead to the future was Bill Clark, president of the architectural firm Stevens & Wilkinson.

His firm is designing the new Judicial Center with the New York firm of Robert A.M. Stern. Of course, the legislature must still approve funding to build the new $105 million complex.

But state leaders expressed confidence the project would be moving forward.

That’s the way it is in Atlanta – buildings come and go. The city’s forms are like shifting sands in a desert storm. We build history. We destroy history. And we rebuild for a future that may or may not last.

Over the years, I’ve gone to nearly as many implosions as I have fingers. My first was the old IRS building at the corner of Peachtree and Ellis streets – a site next to the Georgia-Pacific building that is still begging to be redeveloped.

The first implosion I took my children to was to see the Rich’s Store for Homes bite the dust. They got to see part of their history evaporate because it was the location of the Downtown Child Development Center, where they had spent the first several years of their lives.

But we all agreed that our favorite implosion was the Atlanta Fulton County Stadium. My parents were still alive, and although my father had fought hard to “SOS” – Save Our Stadium – we couldn’t miss such a special implosion. 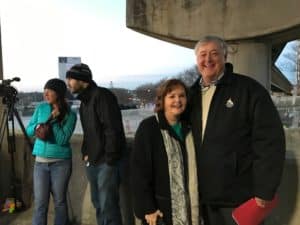 Cristal and Steve Stancil are ready for the implosion. On their left are my colleague Amy Wenk and my son, David Luse (Photo by Maria Saporta)

We were invited to the roof-top of the Stadium Hotel – I’m pretty sure the invite came from former Bureau of Buildings director Norman Koplon.

Koplon had overseen the construction of so many of Atlanta’s signature buildings, and he had a deep respect for the Atlanta architects who had designed them.

The stadium implosion was so dramatic because the explosions went off in a circular motion with stadium falling like a set of dominos.

My colleague, Amy Wenk, and I went to Sunday morning’s implosion together. We first met at the implosion of the Roosevelt Tower, a senior citizens high rise at the corner of North Avenue and Techwood Drive.

So implosions are like bookends. They are an ending and a beginning – separated by a few explosive seconds.

So what’s next? The Georgia Dome?

Rendering of the Georgia Judicial Center from the southern viewpoint (Special: Stevens & Wilkinson)