The legacy of disconnect between the region’s BIPOC community and arts institutions with a legacy of white influence is addressed in an initiative that unveils its first product July 2 – a film of dance and music that explores a painting touching on themes of migration. 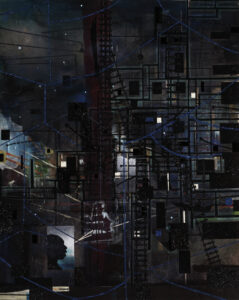 The performances in the 10-minute film are inspired by a painting by Radcliffe Bailey, which is in the permanent collection of the High Museum of Art. The film concludes with a discussion of inspirations the collaborators gleaned from the painting, “Permanent: EW, SN.” Speakers include:

The film launches the Permanent Project. Its goal is to provide additional perspectives on artworks by Black artists in the High’s collection, and present the resulting experiences in Atlanta’s historically Black communities.

The first community to be recognized is Atlanta’s English Avenue. The film is dedicated to the neighborhood and was screened for residents in a May 3 event at the High. This autumn, the film is to be shown in the neighborhood on dates to be determined. 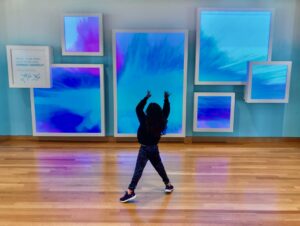 A young Black visitor to the High celebrated the instructions next to the exhibit: ‘Move your arms. Kick your legs. Express yourself!’ Credit: Kelly Jordan

History weighs heavy in this area, developed for the white working class by the son of Atlanta Mayor James English, whose business enterprises included the Chattahoochee Brick Co., according to a 2006 community redevelopment plan conducted for the English Avenue Neighborhood Assoc.

The land of the shuttered brick company was declared a sacred site in April by a group of area advocates. The declaration recognizes the legacy of exploitation of Black convict labor to make bricks used in public works projects and buildings throughout the city.

The Permanent Project aims to highlight selected pieces by Black artists that are in the High’s collection. These pieces are to be explored through art experiences, including film, to reveal to non-white communities the value arts institutions can bring to their lives, including institutions with a legacy of white influence.

Pecou, in a statement, described the project as providing additional meaning and context that brings art “off the wall:” 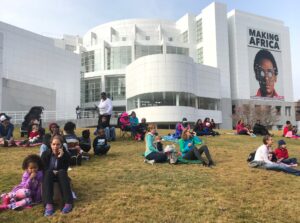 The High was the first museum to present the major traveling exhibit, ‘Making Africa: A Continent of Contemporary Design.’ Visitors turned out in force from Oct. 14, 2017 to Jan. 7, 2018. Credit: Kelly Jordan

The Permanent Project continues the focus on inclusivity that Randall Suffolk brought to the High when he arrived in 2015, as Nancy and Holcombe T. Green, Jr., Director. This effort includes the “Art and Inclusion Report: 2015-2020,” which, “while it marks our progress, it more importantly establishes a new baseline to guide the Museum’s ongoing dialogue about what’s next,” as Green wrote in the introduction:

At the HIGH Frequent Friday event on July 2, at 7 p.m. and 8 p.m., the High Museum of Art is to screen the film inspired by the painting “EW, SN,” by Radcliffe Bailey and in the High’s collection. Tickets are on a first-come, first-served basis and information and tickets are available here. More information on the Permanent Project is available here. 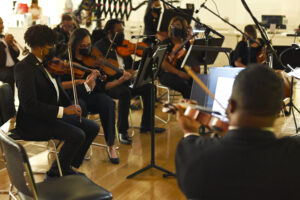 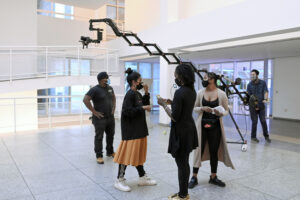