The proposal to close strip clubs and other “adult-oriented businesses” along Cheshire Bridge Road isn’t the only urban renewal issue facing the Atlanta City Council Monday. 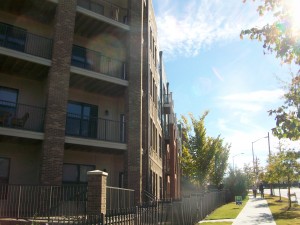 Atlanta is rebuilding the streetscape of Joseph E. Lowery Boulevard in West End so it will be as attractive as this segment, in front of the Sky Lofts condo complex, shown in this photo taken in November 2010. Credit: David Pendered

Also on the agenda is a small item that has become part of a much bigger picture – the potential for community renewal in neighborhoods near the future Falcons stadium.

The small item is a proposal to spend $460,617 to continue making it more pleasant to walk between the Atlanta University Center and West End. Incidentally, West End is the first commercial district south of the new stadium and is located closer to the stadium than Atlantic Station.

There’s little likelihood of controversy over the West End project. It’s on the consent agenda, meaning that it won’t even be identified by name before the council votes on it, at the top of the meeting, as part of a 20-page package of proposed legislation.

The two related Cheshire Bridge items, on the other hand, are near the bottom of the agenda. They call for all adult businesses to relocate within five years. The legislation, by Councilmember Alex Wan, was approved by a 2-1 vote by the council’s Zoning Committee and rejected by the city’s Zoning Review Board. Several councilmembers are braced for a lengthy debate.

The West End project sailed through the City Utilities Committee with a 5-0 vote, with two councilmembers absent – Wan and Yolanda Adrean. 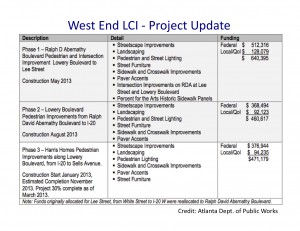 This update on improvements in the West End area was released March 26 by Atlanta’s Department of Public Works.

Evidently, there’s much to like about a project that fulfills a promise made to the community in 2001. That’s when Councilmember Cleta Winslow successfully introduced a resolution that adopted a concept plan for improving West End that was the result of a study provided through a Livable Center Initiatives award. The LCI program is overseen by the Atlanta Regional Commission.

Now, the city is implementing the plan to upgrade Lowery Boulevard. The total cost is $1.1 million and the work is underway in two phases, according to a March 26 report from the city’s Department of Public Works.

In addition, a $470,000 program is underway to improve the streetscape along Ralph David Abernathy Boulevard, between Lowery Boulevard and Lee Street. Altogether, the total project is priced at $1.6 million and the federal government is providing almost $1.3 million. The remainder is provided by Atlanta.

This work matters in the context of the proposed stadium because West End is among the neighborhoods that could benefit from the $1 billion investment.

West End was not specifically identified in the city’s legislation to provide $200 million in funding. But West End is the logical southern terminus of Atlanta’s urban core, according to a study conducted by Georgia Tech students under the guidance of Mike Dobbins, a Georgia Tech professor of practice and former Atlanta planning commissioner.

The sidewalk and intersection improvements now being built are expected to significantly improve the experience of walking through West End’s established central business district. The Mall at West End may be the most widely known retail destination, but the area has a wide assortment of shops – many of them located in scenic older buildings.