HOUSTON — The largest city in Texas proudly claims to be the most diverse city in the United States — based on having the most even distribution of Anglos, Latinos, African-Americans and Asians.

But when one looks at the long-term implications of that diversity, it exposes some alarming issues for Houston. And those problems only foreshadow the challenges that the entire nation, including metro Atlanta, will face not too many years down the road.

That was the message that the 2013 LINK delegation of about 110 metro Atlanta leaders heard during their visit to Houston Wednesday and Thursday.

Stephen Klineberg, a sociology professor with the Kinder Institute for Urban Research at Rice University, has been tracking demographic trends in Houston since 1982.

Klineberg said that after World War II, families in the United States enjoyed an increase in their income across the board. But in the last several decades, there’s been a sharp increase of wealth among the highest income groups and a decrease among the lowest income groups. 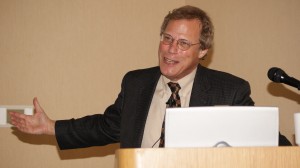 “The striking redistribution of income is the central political challenge of our times,” Klineberg said.

And it’s the fastest-growing population groups — the Latinos and African-Americans — who tend to be on the bottom rungs of the income and education ladder.

“If it had not been a magnet for immigration, Houston would have lost population,” Klineberg said about the city’s growth. “No city has benefitted more from immigration than Houston. No force in the world is going to stop Houston from becoming more African-American, more Latino, or more Asian. It’s a done deal.”

And other major U.S. cities should be keeping their eyes on Houston.

“The American future is here,” Klineberg said, adding that as time goes by, other U.S. cities will look like Houston, facing the same issues that it is facing.

The big issue boils down to education.

While more and more of today’s jobs need a college degree, the demographic trends are going in the opposite direction.

And as the mostly Anglo baby boom generation gets older and moves on, the education and income gap will only widen.

Like most big cities, Houston is wrestling with its public education system (which it refers to as “Independent School Districts”).

Angela Blanchard, president and CEO of a philanthropic organization called Neighborhood Centers Inc., said that “this is a human capital moment for our educational system,” which she described as “completely broken.” It’s time to start over.

Richard Carpenter, chancellor of Lone Star Community College, said: “There is a growing gap in what we are producing and what we need.”

Plus, it’s obvious that public schools need to undergo a transformation to be successful.

“Only the bravest among us will embark on a path of transformation,” Carpenter said. “We tweak it because we are political entities. We in Houston right now are in a crisis mode… We’ve got a train wreck coming, and we see it. We have to do bold things with our K-12 educational system. .”

Specifically, Carpenter said the major issue is preparing Latino students and other under-performing students to get a college education.

His advice to Atlanta? “Be bold. Demand transformative change. You dictate that. You’ve got to have a loud voice.”

Mike Feinberg, a co-founder of KIPP Schools, has helped create one of the most successful constellation of 125 charter schools in the country.

Former Georgia Gov. Roy Barnes invited Feinberg and KIPP to Atlanta to open some schools in the city. Now KIPP is teaching 40,000 students nationwide in what is being viewed as a game-changer in urban education.

Feinberg, who lives in Houston, said that the goal is to make every child be prepared to go college when they graduate from high school — with the belief that they will need those skills no matter what path they decide to take.

For KIPP, the approach is to decentralize the educational experience as much as possible so that there can be a grass-roots solution for each school.

Asked whether KIPP would consider taking over a large urban public school system like Atlanta (which is currently looking for a new superintendent), Feinberg said that KIPP  actually had offered to take over the schools in one of the worst performing districts in Houston.

Although KIPP was brought on as an advisor, the Houston Independent School District was not ready to turn over control of those schools the charter school organization.