As Mall at Stonecrest marks 10 years, area businesses plan association in lieu of a CID

As the Mall at Stonecrest prepares to celebrate its 10th anniversary in Lithonia in October, a new business association is taking shape to bolster the area surrounding the mall.

The group intends to champion a power center that’s a bit unusual: It doesn’t have a Community Improvement District to oversee its broader concerns, as do at least 12 other major commercial centers in metro Atlanta, according to a list maintained by the Atlanta Regional Commission.

In the absence of a CID, Stonecrest area business leaders plan to model a new group along the lines of the Tucker Business Association. That north DeKalb County group represents about 130 businesses and has existed 56 years, said Honey Van de Kreke, TBA’s vice president. 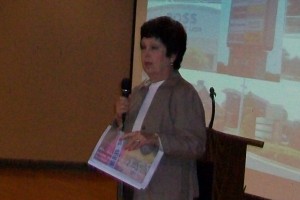 Honey Van de Kreke, of the Tucker Business Association, gives tips on how to start an association. Credit: David Pendered

The impetus at Stonecrest came about a year ago, when Jetha Wagner, a vice president with Euromex Management Group, and Sarah Kendall, a development director with mall-owner Cadillac Fairview, decided the area needed some help.

“We saw the community going in a direction we didn’t think was the right direction,” said Wagner, whose company oversees about 1,700 apartments near the mall.

Efforts to create a Stonecrest CID had gone nowhere since at least 2008. The mall opened in the economic slump that came right after the Sept. 11, 2001 attacks on the United States, and never regained steam. The original plan called for the mall, at 1.3 million square feet, to be the centerpiece of a master-planned 1,100-acre mixed use community.

In contrast, about a dozen other major commercial centers that have a community improvement district include Cumberland Mall, Town Center, Perimeter, Gwinnett Place and the Buckhead area that includes Lenox Square and Phipps Plaza, according to a list maintained by the Atlanta Regional Commission. In CIDS, property owners agree to pay higher taxes for improvements such as streetscapes and public safety details.

With the Stonecrest CID proposal stalled, the two businesswomen got together and pushed, winning support from various DeKalb County government, city of Lithonia and civic officials – including DeKalb Commissioner Lee May, who hosted an organizational meeting Thursday morning at the Stonecrest Library.

“It’s taken Sarah and me a year to get to this point,” Wagner told the audience of about 40 persons. “We’ve got the county on board, and we’ve got you in this room. Let’s get this alliance going.”

Van de Kreke was on hand to give advice on how to start a group from scratch. As she said, “it’s not rocket science,” but it is hard work.

As an example of the Tucker Business Association’s success, Van de Kreke pointed to new streetscapes on Main Street.

A town celebration is set for Oct. 15 to cut the ribbon on the 10-month project that created wider sidewalks and narrowed Main Street from four lanes to two lanes. 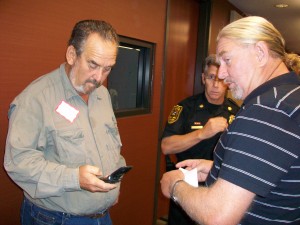 “These are some of the things you can do as you get enough hands,” she told the Lithonia business leaders. “You can make these things happen.”

Jim Kelly, Jr. and his brother, Dan Kelly, favor the formation of a Stonecrest area business association. They own about 12 warehouses on Lithonia Industrial Boulevard and are plagued by scofflaws dumping tires, roofing debris and stolen vehicles on or near their property, Jim Kelly said.

“We have a major investment in DeKalb County,” he said. “I need somebody at the [police] precinct I can call, because I don’t want to have to call 911 about these kinds of things.”

DeKalb police Major Steve Stathis met with the Kelly brothers after the meeting and made arrangements for their concerns to be handled.

May, the county commissioner, noted that the situation showed the potentially helpful nature of a business association.

“Whereas you didn’t get the resolution you needed by yourself, maybe as an association you could get that resolution,” May told the Kellys. 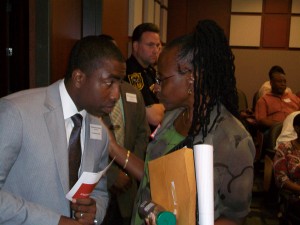