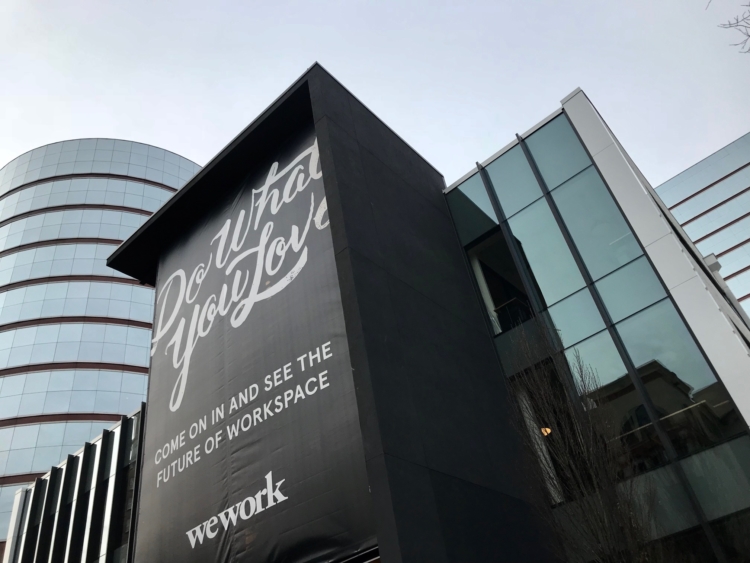 The perceived market value of WeWork, the largest operator of flexible office space in the city of Atlanta, is cratering on Wall Street. But WeWork’s market niche – co-work office spaces favored by tech firms – is here to stay and expected to expand in metro Atlanta, according to a new report from CBRE. 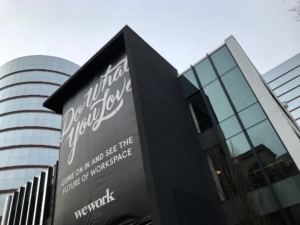 Since it raised its flag over this Midtown location in 2018, WeWork has come to dominate the Midtown market in the flex office space sector, according to a CBRE report. Credit: Kelly Jordan, 2018

Growth in the tech and entrepreneurial sectors in the city and region has helped drive metro Atlanta to tie for eighth largest in the nation. Metro Atlanta shares the ranking with Washington, according to CBRE’s report, Let’s Talk About Flex: The U.S. Flexible Office Market in 2019.

Co-work spaces have grown exponentially in the past decade. Companies are attracted to them partly because they appeal to workers who don’t want to be bound to a cubicle. Workers can come to a flex space office, toss their gear in a locker and set up shop in a workspace or even a quiet room – whatever suits their workload for the day.

Then-Gov. Nathan Deal’s presence at a WeWork ribbon cutting in Midtown on Jan. 22, 2018 underscored the significance of the company’s expansion in the region. Deal was joined by then First Lady Sandra Deal; Larry Williams, CEO of the Technology Association of Georgia; and Metro Atlanta Chamber President and CEO Hala Moddelmog.

Since that opening day, the amount of office space delivered around the region as co-work space has grown at a steady rate – especially in relation to traditional space. The proportion of flex space has grown from 1.6 percent to 2 percent in the past year, in terms of metro Atlanta’s total office space. Metro Atlanta now ranks among the nation’s most-penetrated markets for flex space, compared to the national average of 1.8 percent, according to CBRE’s report. 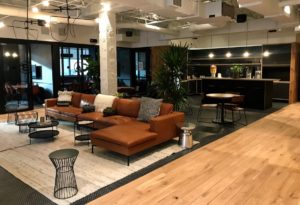 On opening day in 2018, the WeWork office at 1372 Peachtree, in Midtown, offered a common area with space to relax while chatting with colleagues or taking a break from an office. File/Credit: Kelly Jordan

CBRE’s Dan Wagner, director of research, has projected this growth trend will continue. As Wagner observed in a statement:

Wagner paid heed to the strength of the region’s office market in recent years. The niche of flex space is benefitting from the overall positive trends, he observed:

The proportion of co-work office space in metro Atlanta has risen to 2 percent from 1.6 percent in the past year, according to a report from CBRE. Credit: CBRE

WeWork is one of five major players in metro Atlanta’s co-share space and is the dominate company in Midtown, according to CBRE’s report. The other markets with a major presence of co-share space are North Fulton, Cumberland/Galleria, and Buckhead.

WeWork was on track to be among the largest initial public offerings when shares were to have been launched this month. The valuation in January was $47 billion and has collapsed to an estimated $10 billion, according to a Sept. 18 report by usnews.com. Investors have raised questions about the sustainability of WeWork’s business model and expressed concerns about the leadership of flamboyant CEO Adam Neumann, who co-founded the company in 2010 with his wife, Rebekah Neumann, and Miguel McKelvey.