Crime is again coming to the forefront of conversation in Atlanta and Fulton County. 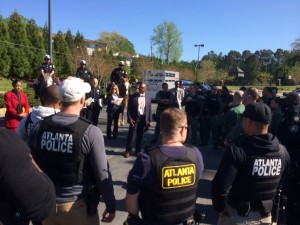 Atlanta police officers are briefed before they canvas for clues in four killings committed east of the intersection of I-285 and Martin Luther King Jr. Drive. Credit: David Pendered

Four members of the 9 Trey Gangster organization have been arrested by Atlanta police in connection with one homicide in southwest Atlanta, police said Wednesday. The gang is affiliated with the United Blood Nation, as in the “Crips and Bloods” of the 1980s, according to the FBI.

Fulton County commission Chairman John Eaves is slated to speak Thursday evening at a program titled, “Neighborhood Gangs and Protecting Our Youth.” This follows the “Crime and Safety Summit” Eaves convened in March.

Crime is always an emotional issue – even when the crime rate is declining, as the police crime data say it is in the city of Atlanta.

Atlanta homicide Capt. Paul Guerrucci said one reason the rate of violent crime in Atlanta is declining is because of programs such as the neighborhood canvas that police conducted late Wednesday afternoon in search of clues in four homicides.

“Violent crime keeps going down, down, down, which shows our endeavors are going in the right direction,” Guerrucci said.

As Guerrucci spoke quietly, about 50 officers left the Adamsville Recreation Center to look for leads in four unrelated homicides that have been committed between January and March. Arrests have been made in two cases, and Guerrucci said the other investigations are progressing well.

One officer said the four 9 Trey gang members were involved in a Jan. 26 home invasion and that witnesses are needed to make the case stronger. 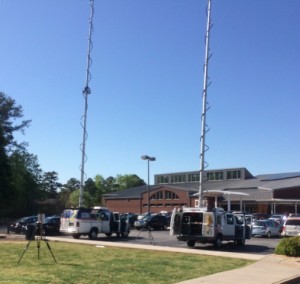 Atlanta police invited the media to report on the search for witnesses to four killings in southwest Atlanta. Police hope the news stories will prompt witnesses to come forward. Credit: David Pendered

The hope of finding witnesses who are willing to talk is a primary reason police conducted the Homicide Tactical Canvas. Police recognize that some folks are afraid to talk, Guerrucci said. For that reason, officers handed out business cards saying tips can be made anonymously. Rewards can reach $2,000.

The killings the team hopes to solve are described as such in police incident reports:

Incidentally, the eight major crimes and the change recorded for the years 2014 and 2009 in the year-to-date figures for Atlanta include: