There’s no denying a diversity gap exists in the technology industry, but in recent years tech companies have focused efforts to increase diversity within their ranks.

Given Atlanta’s concentration of Historically Black Colleges and Universities (HBCUs), major technology firms have increased their investments in the Atlanta area.

Then there’s CodeHouse, a nonprofit started by two Morehouse College alums — Ernest Holmes, who serves as its president; and Tavis Thompson, who is vice president, as well as Spelman College graduate Jaycee Holmes (Ernest’s sister), who serves as director of curriculum and instruction. 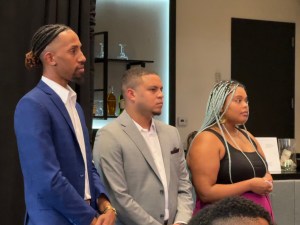 CodeHouse was launched in 2021 to tackle the diversity gap within the tech industry by focusing on college freshmen attending five HBCUs who are majoring in tech-related fields. The CodeHouse Scholars Initiative provides students selected in the program with academic scholarships up to $20,000, professional development, and one-on-one mentorship throughout their college career.

CodeHouse launched the second year of its STEM scholarship and mentoring program at a celebratory dinner at the Gathering Spot on July 6, which included representatives of several high-tech companies that have signed on with the program.

Attending the dinner were 43 HBCU students who are part of the second-year class. The participating schools include Morehouse, Spelman, Clark Atlanta University — all based in Atlanta — as well as Washington, D.C.-based Howard University and North Carolina Agricultural and Technical State University in Greensboro, N.C. The 29 scholars in the first class also were invited to the dinner.

“We’re proud of the strides we made during the CodeHouse Scholars Initiative’s inaugural year,” said Ernest Holmes, president of CodeHouse. “Today marks another important step in our journey to improve diverse representation in the tech industry. As we welcome the next generation of leaders into the CodeHouse fold, we’re confident that we’ll be able to amplify their talents through our various initiatives and the support of our partners as we look to make the world a better, more inclusive place.”

The dinner also celebrated the technology firms who are supporting CodeHouse’s vision. The first company to come on board was PayPal in 2021.

Kim Jenkins, PayPal’s global head of diversity, inclusion, equity and belonging, talked about meeting Ernest, Tavis and Jaycee. She was so taken with their well-thought-out plan that she told her superiors: “If we are who we say we are, we need to put our money behind this.”

The company responded with a $1.5 million grant, enabling CodeHouse to launch its first class of scholars. Then in December, Google announced a $1 million grant to CodeHouse, which enabled the program to expand. Other partner companies include Microsoft, LiveRamp, Twitter and UKG.

Reggie McKnight, Google’s head of global social impact, said his colleague, Nicole Brenner, first became aware of CodeHouse and how important a partnership could become for the company.

“Google believes the CodeHouse vision is working,” McKnight said at the dinner. “That’s why we put $1 million into this organization. There’s going to be a return on that investment that can’t be measured.”

McKnight also told the students they were in “this historic city called Atlanta,” the cradle of the Civil Rights movement based on nonviolent social protests.

“Today so many are seeking change through violence,” said McKnight, who credited Civil Rights leaders for not leading with guns “but leading with grace.”

Then McKnight directed his message to the CodeHouse scholars.

“CodeHouse scholars, now is your time,” McKnight said. “When you stand up, you can change the world. We have the energy and strength and creativity to make the world a better place.”

The Google partnership already has taken hold, even before CodeHouse was launched.

Ernest Holmes said that when he attended Morehouse, he was able to intern with Google for several summers.

“I’m now on the team encouraging students to go to Google,” said Holmes, who in addition to his duties at CodeHouse is a technical program manager with Google.

After the dinner, McKnight said being in a room of diverse scholars seeking careers in the tech industry was inspirational. “It’s all part of the Atlanta Way.”