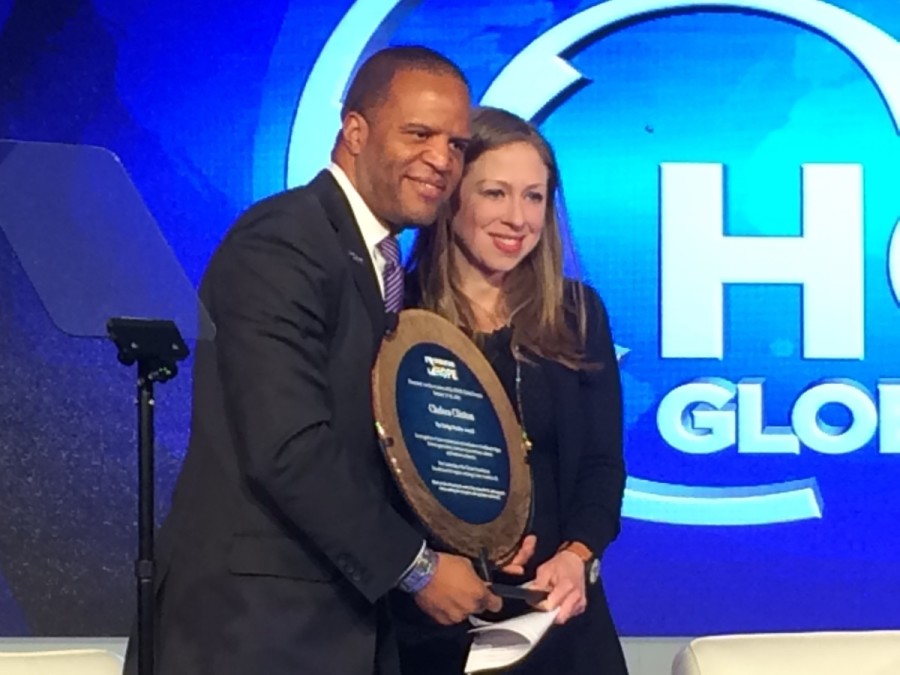 The fourth annual HOPE Global Forum in Atlanta was a testimonial to the economic revolution that Operation HOPE founder John Hope Bryant has been building since 1992.

No, Operation HOPE’s revolution is not a sit-in or a protest march or an ultimatum to big business or Wall Street.

Instead, it works with bankers, business leaders, social activists and civil rights leaders to implement strategies that will help those living below the poverty line as well as the working poor to access the American dream of financial opportunity. 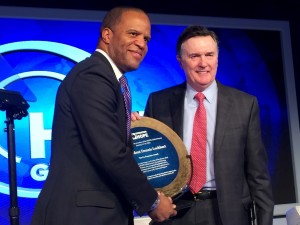 It is not a stretch to say that this is the modern version of what Martin Luther King Jr. envisioned when it called for economic integration combined with social integration.

Operation HOPE relocated its “heart-quarters” from Los Angeles to Atlanta in 2009 because of King and his current disciples – Ebenezer’s Raphael Warnock and former Atlanta Mayor Andrew Young.

Ever since, Operation HOPE has been encouraging students to become entrepreneurs by having “Business in a Box” toolkits. It has encouraged banks across the country to better serve the poor and those with questionable credit.

Bryant sincerely believes that Operation HOPE can help lift people out of poverty if they can improve their credit ratings from 500 or under to above 700. HOPE offices in banks and trained tax preparers can help the poor receive the federal Earned Income Tax Credit – as a way to boost their savings accounts.

It all comes down to help develop financial literacy among the people who need it most. Given the growing inequality in Atlanta, the United States and the world, Operation HOPE’s mission is perfectly timed. 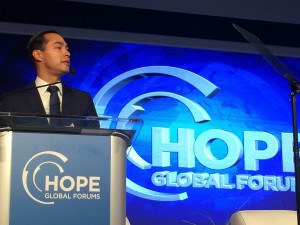 So at the Forum last week, I marveled at what Bryant has created. For the second year in a row, Julian Castro, the U.S. Secretary of Housing and Urban Development, addressed the conference.

The keynote speaker last year was former President Bill Clinton. This year it was his daughter – Chelsea Clinton, vice chair of the Clinton Global Initiative.

But throughout the three-day conference, speakers from around the world were focused on how to help the poor enter the middle class. And what made the forum so powerful is that the people in the room were in positions where they actually could make a difference.

Among the first speakers was Dennis Lockhart, president of the Federal Reserve Bank of Atlanta, who spoke of people who live in a total cash economy. “Many of the underserved are just that – underserved,” Lockhart said. 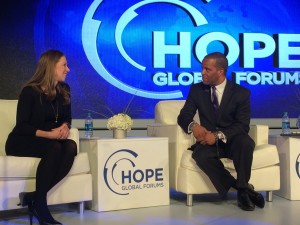 HUD’s Castro, who has an excellent chance of being the vice presidential nominee on the Democratic ticket, spoke of trying to empower every person to find the possibilities that lie within almost everyone.

Castro shared a “sobering” statistic. In St. Louis, a child from an upper-class community lives 18 years longer than a child living just eight miles away in a poor community.

From HUD’s point of view, the agency is working to create more affordable and fair housing choices. It also is working on education initiatives that lead to more jobs and investment. Lastly, Castro spoke of the need to give those who have been incarcerated an opportunity to re-enter the working sector and society.

“We need to improve the odds for folks who have been incarcerated by making sure they get a second chance,” Castro said. ” Once they served their time they deserve to go as far as they can. Arrest records should not be used for keeping someone from getting a home.”

Helping eliminate poverty is complex. Chelsea Clinton said that if we wait until kindergarten “it’s already too late.” Early childhood education is critical so that children can be exposed to an extensive vocabulary by the time they start school. 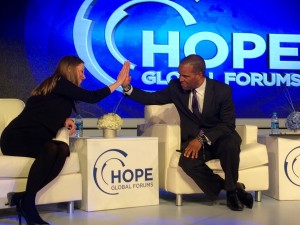 “This is not a partisan issue,” Bryant said. “It’s about ‘the get it done’ party. We really need everybody under this tent.”

The Forum included both Democrats and Republicans as well as people from a myriad of institutions. A special spotlight was given to women, often the anchor for families with limited resources. Coca-Cola’s Lisa Borders announced a $1 million grant to Operation HOPE for its women’s agenda.

“Women stay with abusive men primarily for money,” said Bryant, who called a decade for women.

“Just a decade?” questioned Clinton, who got Bryant to expand his timeframe. “African-American women started more businesses than any other demographic in America today,” she said before urging the younger generations to only be engaged on social media but in traditional roles as well – especially being willing to run for public office or serve in government. 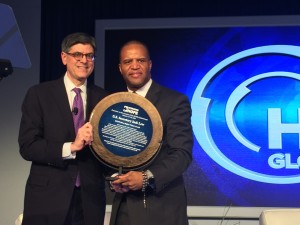 The Summit also had U.S. Treasury Secretary Jack Lew as a special guest. They had just rededicated the Treasury Annex building in Washington, D.C. into the Freedman’s Bank building.

A year ago, Bryant was on a personal campaign to get people around the country familiar with Freedman’s Bank – an initiative started by then President Abraham Lincoln to help former slaves reach economic freedom. Lincoln was assassinated a few weeks later.

Now Bryant hopes that every bank in America will become a Freedman’s Bank – willing to help lift the poor from the lowest economic rungs to one where they can fully participate in the U.S. economy. For Bryant, it’s simply helping teach people to spend less money than what they earn.

Atlanta’s Andrew Young also held a public conversation with Tony Ressler, not because he’s the majority owner of the Atlanta Hawks – but rather because he’s the chairman, co-founder and CEO of Ares Management, a private equity group, which he described as the largest business development company in the United States. 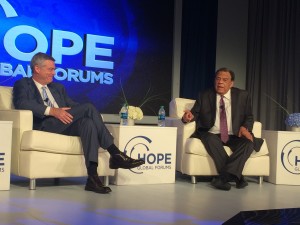 “Having venom for Wall Street doesn’t help the process. Every industry has good and bad,” Ressler said before adding one of the sad truths of the financial industry. “Institutions are generally created to lend money to people who don’t need it.”

For three days, some of the powerful people in the world came to Atlanta to help realize King’s vision of economic integration.

“You are experiencing the largest gathering of leaders in the world on the topic of the eradication of poverty and the empowerment of the poor,” Bryant said of the nearly 3,000 delegates from 40 countries meeting at the Atlanta Marriott Marquis.

Despite countless anti-poverty programs over the years, the divide between those with money and those without continues to grow.

If that trend is going to reverse itself, it will be because of people like Bryant, who have found a way to bring people from all walks of life working together to give everyone a viable economic future. 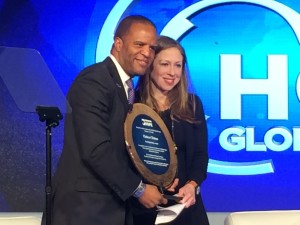