Atlanta Beltline park already trashed by vandals after reopening in May with $4.5 million facelift

If you build a Beltline park, they will come – and trash it.

That has been the experience with a park that opened May 14 following a $4.5 million restoration. D.H. Stanton Park is located in Southeast Atlanta, adjacent to the city’s planned corridor of transit, trails, greenspace and development.

The graffiti apparently isn’t of a nature that can be considered urban art.

The subject of vandalism at Stanton Park arose Tuesday at the Atlanta City Council’s Community Development Committee. No action was taken. 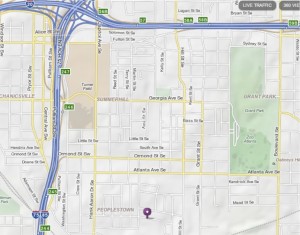 Stanton Park is located a few blocks south of the half-way point between Turner Field and Zoo Atlanta. It’s in the Peoplestown neighborhood.

The park’s rebirth was of great significance in a struggling quarter of the city. That’s partly because a girl was burnt there on Martin Luther King Jr. Day, 1999 as she scooted down a sliding board.

Methane gas ignited beneath the slide after it had leaked from an old landfill beneath the park.

The park’s recent destruction is beyond that of neighborhood pranksters, based on Dusenberry’s comments.

“It’s breaking glass walls and windows, tearing water fountains off walls,” Dusenberry said. “It is vandalism – thousands, if not tens of thousands, of dollars.”

Dusenberry said the vandals likely live in the community.

“It’s not like people are driving D.H. Stanton to destroy it,” Dusenberry said.

Councilman Michael J. Bond suggested that security cameras could be installed. Police could monitor the cameras and use them to catch the vandals.

Dusenberry asked anyone with information about the vandals to call Atlanta police at 9-1-1.

Previous Article
Shareholders approve AGL-Nicor merger with goal to close by the end of the year
Next Article
Fort McPherson: Varying views on how it should be redeveloped after military exits