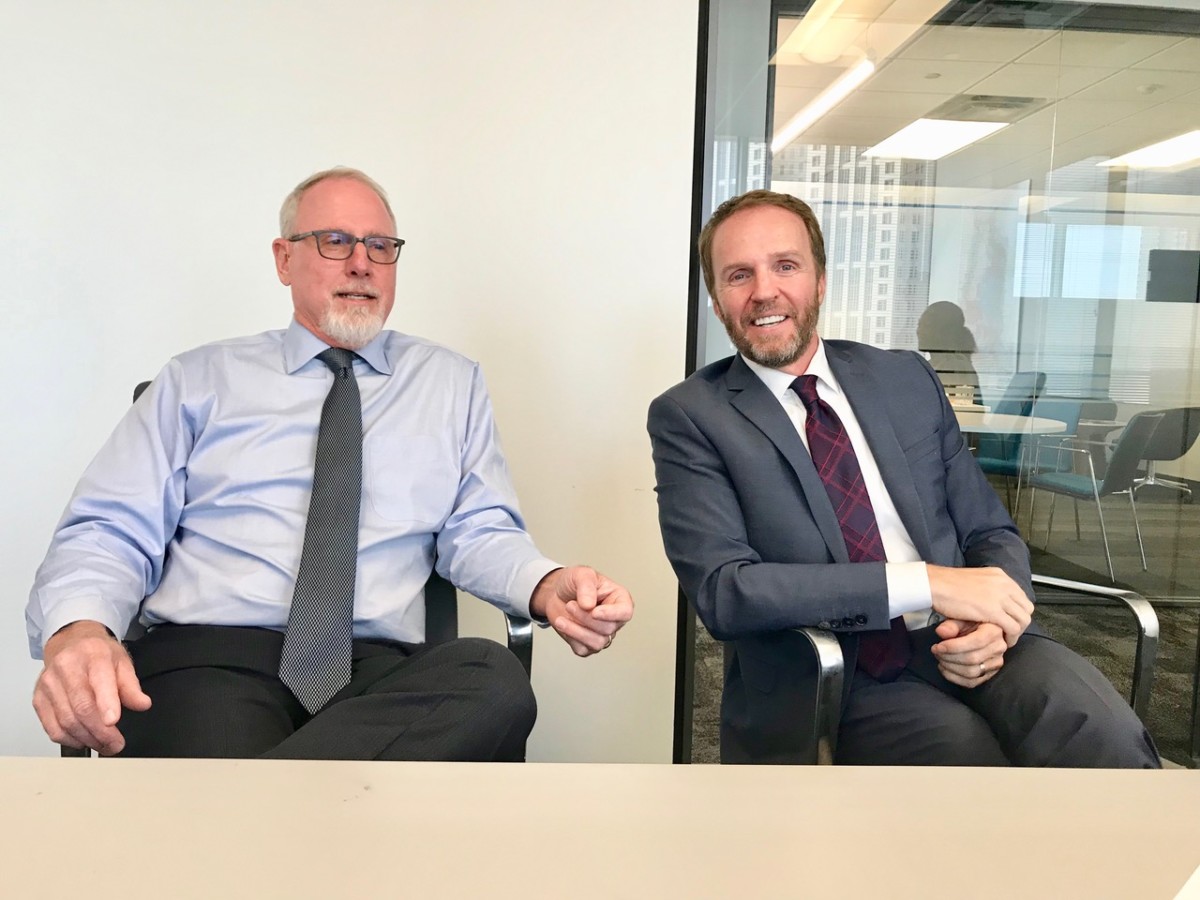 ABI Chairman John Somerhalder with Brian McGowan during the interview after the Aug. 8 board meeting (Photo by Maria Saporta)

By Maria Saporta
As published in the Atlanta Business Chronicle on Aug. 10, 2018

The Atlanta BeltLine Inc., in the midst of a transition in leadership, has adopted a new affordable housing strategy and has been actively engaged in acquiring land as well as making sure BeltLine transit remains on the City of Atlanta’s More MARTA plans.

At Atlanta BeltLine Inc.’s monthly board meeting Aug. 8, ABI CEO Brian McGowan said he didn’t want to get corny or teary-eyed as he bid farewell. His last day with the City of Atlanta will be Aug. 16, when he will be moving to Seattle to become CEO of the Greater Seattle Partnership, an economic development organization. 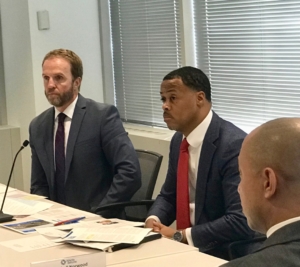 ABI Chairman John Somerhalder then said Clyde Higgs, who has served as ABI’s chief operating officer, had been named interim CEO of the city agency.

“We are going to take this opportunity to do a full search process,” said Somerhalder, who added that Higgs would be considered as a candidate for the position.

Higgs told board members that McGowan’s tenure has “been a short time, but it’s been a fun time.”

Somerhalder and McGowan sat down for an interview after the board meeting to talk more in-depth about what ABI had been able to accomplish during the past year, and the work that needs to happen going forward so the BeltLine can meet its 25-year time frame.

The ABI board agreed to work with a search firm that will look nationally for a new CEO even though Somerhalder made it sound as though he would prefer local candidates.

“It’s really important we find someone who really understands Atlanta,” he said. “We need to find the right candidate.”

The BeltLine project – a 22-mile corridor that surrounds the central city – is a multi-faceted initiative that includes parks and trails, economic development, housing, land acquisition and transportation. The effort started in 2006 during the administration of Atlanta Mayor Shirley Franklin and was continued during past Mayor Kasim Reed’s two terms as mayor. Now it is up to Mayor Keisha Lance Bottoms, who did not attend the Aug. 8 board meeting, to steer it through its next chapter.

“We are 12 years into a 24-year project,” McGowan said. “We are half-way through the life of the project. We need to be realistic and honest with the public about what we can accomplish by 2030.”

McGowan said that when he joined ABI last September, one of top goals was to make affordable housing “a forethought, not an after-thought.” ABI brought together housing leaders from throughout the city to work on the ABI Affordable Housing Working Group. which released its final report at the board meeting.

Dwayne Vaughn, ABI’s vice president of Housing Policy and Development, said the working group recommitted to the goal of 5,600 affordable housing units within the TAD. To reach that number, ABI would have to help develop 250 units each year between now and 2020; 320 units a year between 2021 and 2025; and 380 affordable units between 2026 and 2030. 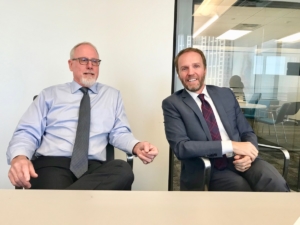 ABI Chairman John Somerhalder with Brian McGowan during the interview after the Aug. 8 board meeting (Photo by Maria Saporta)

BeltLine officials said it was just as important to add affordable housing beyond the TAD districts but within the city’s BeltLine planning district – roughly a swath that includes the land within a half-mile of the corridor.

Since 2006, the report said that 1,042 affordable housing units had been built outside the TAD but within that corridor. The BeltLine, with its housing partners, would like to set a goal of how many thousands units could be developed within the planning district by 2030.

“We are not a housing agency,” McGowan emphasized. “The BeltLine cannot do it alone. The agencies that actually produce housing should have a number.”

McGowan added that the mayor’s office is focused on making sure all the players involved with affordable housing in the city will work together.”

Another big issue is transit along the BeltLine. It has become a hot topic during the More MARTA plan, which outlines the projects the city will prioritize with its $2.5 billion in funds coming from the new half-penny MARTA sales tax.

The preliminary plans would build transit along two segments of the BeltLine – along the Eastside and Westside trails. BeltLine advocates have called on the city to build transit along the entire loop. But the Northwest quadrant is still an active rail line. McGowan jokingly wished the board good luck with that property acquisition.

During the past year, ABI was able to acquire the southern segment of the BeltLine as well as two key other parcels – a two-mile segment known as the Kudzu line along the Westside for $6..3 million and 2.5 acres at Murphy Crossing on the Southside for $2.1 million (giving the entity a 20-acre site at that location).

That would help Atlanta meet its goals of equity and inclusion as well. “The most important aspect is to get transit dependent people to where their jobs are,” McGowan said. 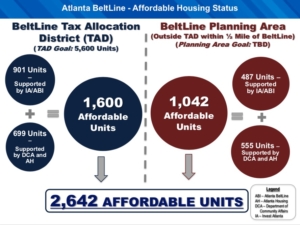 Looking ahead, McGowan said ABI should become its own authority and no longer be under the Invest Atlanta umbrella.

“It would be a redevelopment authority, just like Invest Atlanta,” said McGowan, who moved to Atlanta seven years ago to become CEO of Invest Atlanta. Having two stand-alone entities would address “some transparency issues” and make the board more accountable to the public.

Looking back on the past 11 months as CEO of the BeltLine, McGowan said he had been able to “reset” the organization and hire a new team of people.

During the board meeting, he listed several accomplishments by his team – ranging from property acquisition to a renewed focus on affordable housing and equity. But he acknowledged he had not been able to accomplish all he would have liked.

If he were staying another year, McGowan said, he would be focused on potential public-private partnerships for transit, development and housing as well as continuing efforts to work with other city partners.

“It’s bittersweet,” McGowan said of upcoming departure from Atlanta. “To leave is hard.” 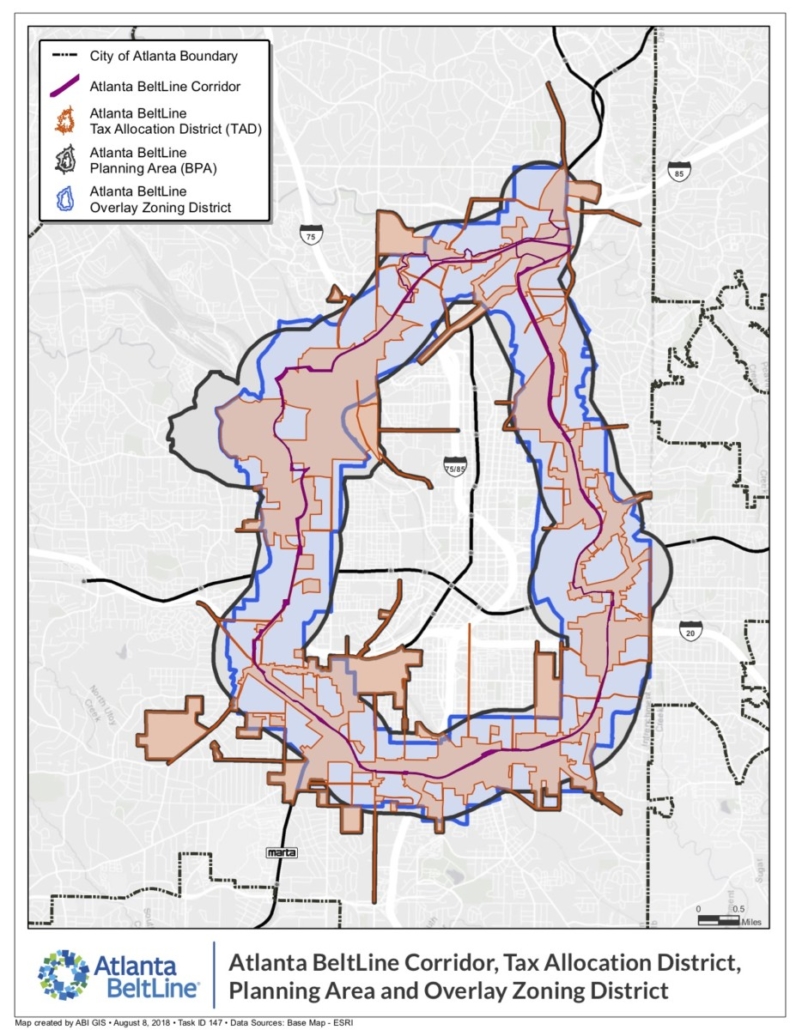