In its 37th year, the conference saluted Black women making a difference in their professions and their community.

In the past 26 years, the annual list has honored  Black women in the metro Atlanta community who have demonstrated their commitment to improving people’s lives in the capital city. 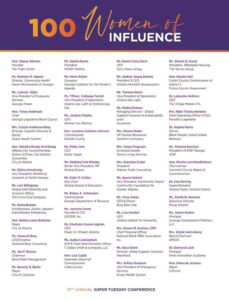 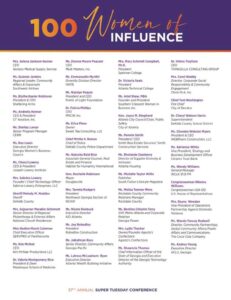 “I was ecstatic and overwhelmed with joy when I found out that I was going to be honored with such a distinguished group of phenomenal women, Sojourner Marable Grimmett, the senior director of regional philanthropy and external affairs for the National Church Residences

Following last year’s COVID-19 protocols, the conference broadcasted virtually and led with the theme One Great Day: The Power to Choose.

The president and CEO of BLH Consulting, Betsy Helgager Hughes, was a panelist on the “How to position yourself for greatness,” discussion.

She told SaportaReport, “to share my perspective as a small Black woman business owner with helping others have the power from within to take the leap like I did nearly 20 years ago when I started my PR firm.”

This is the third year in a row Velma Trayham,CEO of Thinkzilla Consulting Group, has made the list since moving to Atlanta in 2016. She became an ABL member shortly after moving and has been amazed at the impact she has had in the short time she’s lived in the metro area.

She said, “the Super Tuesday Conference gives Black women an opportunity to have a seat at the table and get access to resources and tools.”

“There’s a lot of amazing women in Atlanta that’s doing some amazing things,” Trayham continued “and to be beside them with only being in Atlanta a short period of time; I am just honored to be a part of it.”

In addition to former Democratic Gubernatorial Candidate and founder of Fair Fight Action, Stacey Abrams, Atlanta Mayor Keisha Lance Bottoms and Superintendent for Atlanta Public Schools District Dr. Lisa Herring, Hughes, Grimmett and Trayham felt honored to be alongside the other women making a difference in the metro area.

“Black women have been the backbone of our society. We support, nurture, raise, develop, mentor and historically have lifted up all people,” Grimmett continued.

All three of them thank the ABL for recognizing them in their annual list.

“The Atlanta Business League’s rich history involves a mission that focuses on creating opportunities for Black Americans to go into business to benefit and improve the Black community along with serving as an advocate organization for Black business owners,” Hughes said.

She said that being a member of the ABL supports the organization’s mission and allows everyone involved to network and collaborate with each other.

“I love that the Atlanta Business League recognizes and spotlights brilliant Black women who are accomplished in their fields and making our communities a better place to live and thrive,” said Grimmett.

Membership is now open to join the Atlanta Business League. To find out more log onto their website for more information.