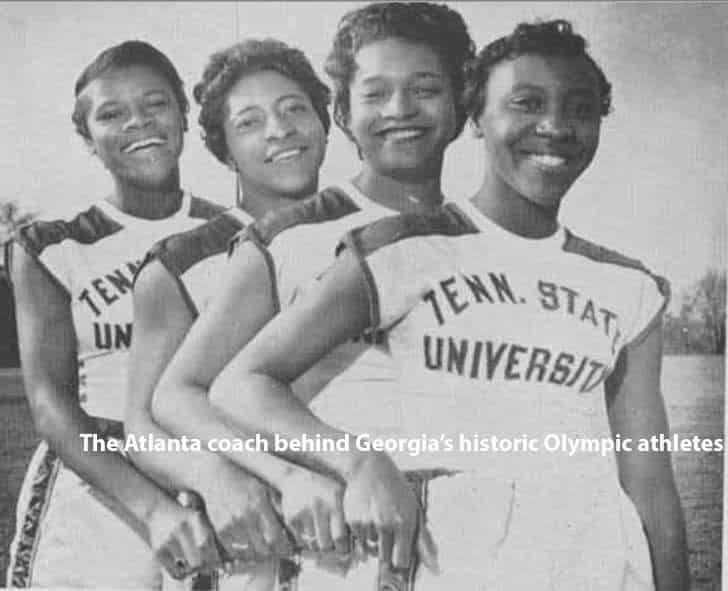 This week, ALLISON HUTTON, program coordinator at Georgia Humanities, recognizes the Atlanta coach who helped Georgia athletes win Olympic glory in the 1950s and ’60s. This is part three in a series of sports stories in association with Hometown Teams: How Sports Shape America, a traveling Smithsonian exhibition sponsored by Georgia Humanities.

During the 1996 Centennial Olympic Games in Atlanta, runner and hometown hero Gwen Torrence delighted the crowd by winning the bronze medal in the 100-meter dash. She and three other American women secured the gold medal in the 4×100-meter relay for the second time in a row.

Four years later at the 1960 Summer Olympic Games in Rome, Martha Hudson, born in Eastman (Dodge County), and Lucinda Williams of Bloomingdale (Chatham County), helped push the American women to a victory in the 4×100-meter relay. 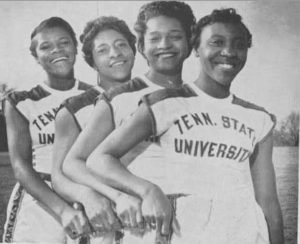 Wyomia Tyus of Griffin, Georgia, and Edith McGuire of Atlanta took gold and silver, respectively, in the 100-meter dash during the 1964 Summer Olympic Games in Tokyo. The women were also part of the 4×100-meter relay that won a silver medal that year.

Tyus returned to the 1968 Summer Olympic Games in Mexico City, again capturing the gold medal for the 100-meter dash.

McDaniel, Matthews, Daniels, Hudson, Williams, Tyus, and McGuire all possessed a natural athletic talent that they developed through hard work and persistence. Before these Georgia women could follow in Coachman’s footsteps — before they could achieve Olympic glory for all the world to see — their talent was identified and cultivated by another woman, also from Georgia. She was their coach, and her name was Marian Armstrong-Perkins.

Born in 1924, Armstrong-Perkins was raised in Daytona Beach, Florida. She received a bachelor’s degree in physical education from the school now known as Hampton University, a historically black university, or HBCU, in Hampton, Virginia. From there, Armstrong-Perkins moved to Atlanta’s David T. Howard High School, where she taught physical education and became the basketball and track coach. (David T. Howard High School, which currently stands empty, can claim notable alumni Vernon Jordan and Maynard Jackson; before becoming a high school, the Old Fourth Ward building was the elementary school that Martin Luther King Jr. attended). Eventually, Armstrong-Perkins earned a master’s degree in counseling from Tennessee State University (also an HBCU). In the summers, during breaks from teaching, Armstrong-Perkins worked with the Tennessee State Tigerbelles, a powerhouse track team led by Ed Temple, whom she assisted with recruitment and development.

Armstrong-Perkins had experience recruiting and developing talent at the high school level. Before she was a gold medal high jumper, Howard High School student Mildred McDaniel had been an excellent basketball player; before McDaniel was a basketball player, however, she had little interest in sports. That changed when Armstrong-Perkins, her physical education teacher, offered a pair of shoes and a place on the basketball team to any young woman who could make 10 consecutive free throws. McDaniel won the shoes and a place on the team. Armstrong-Perkins encouraged her student to give the track team a try, too.  McDaniel was initially uninterested, but after seeing another girl attempting (unsuccessfully) the high jump, she was persuaded to try and found herself successful. In this same pattern, McDaniel became a hurdler, broad jumper, and runner.

Armstrong-Perkins also taught and coached Margaret Matthews, who recounted that Armstrong-Perkins “did a little more than just teach me from a book; she taught me how to live with other people and for myself. . . . She was never partial; she always gave us an equal chance, and I think that’s what gave me the incentive to really want to be somebody.”

Edith McGuire, another alumna of Howard High who, like Matthews, went on to become an Olympian, recalled Armstrong-Perkins’s firmness: “She worked you hard, . . . but she was just a wonderful person.”

A fellow Atlanta track coach, Bettye McClendon, echoed Matthews and McGuire: “She didn’t only coach those kids. She was like a mother to them. They would do anything for her. She had that smooth, quiet way of saying ‘Jump as high as you can.’ And they were going to jump farther than they ever would have dared.”

Armstrong-Perkins shepherded her athletes through high school and on to top college track teams, including the Tennessee Tigerbelles. When Tigerbelle athletes went to the Olympics with Coach Temple, who twice served as head coach of the U.S. Women’s Olympic Track and Field Team, Armstrong-Perkins went, too. The young women who climbed the podiums, wore medals around their necks, and heard the “Star-Spangled Banner” play in recognition of their achievements were young women Armstrong-Perkins had nurtured for years, some since they were adolescents running around the track at Howard High School. They were her champions.

In 1975, after she had become a counselor at Atlanta’s Henry Grady High School, Armstrong-Perkins was inducted into the Georgia Association for Educators’ Hall of Fame. An interview she gave upon receiving this honor reveals Armstrong Perkins’s concern for the development of the student-athlete as a whole: “Track not only teaches an individual to accept responsibility for what he does on his own, but that a person contributes to the whole team. . . . Perhaps that is a parallel to life. Each of us has talent; the more we do with that talent, the more we contribute to the community in which we live.”

Armstrong-Perkins’s contributions — to her students, her community, her state, and her country — were recognized posthumously by the Georgia Sports Hall of Fame in 2006; she died in 1998.

Interested in learning more about sports in Georgia? To read the second part in this series, the story of the Ponce de Leon Ballpark magnolia tree, click here.  To read the first part in this series, the story of how two Jewish brothers helped integrate sports in Atlanta, click here. You can experience Hometown Teams: How Sports Shape America, the traveling Smithsonian exhibition sponsored by Georgia Humanities, from August 13 through September 24 at the Nashville Community Center in Nashville.