Atlanta communities facing higher landfill prices for what they flush

It’s getting more expensive to bury what metro Atlanta flushes down the toilet.

“Biosolids” are what’s left over after treating sewage. Clean water gets sent back out to waterways, but something’s got to be done with the residue of what’s washed down metro Atlanta’s kitchen, laundry room and bathroom drains.

The price of landfilling biosolids has gone up considerably in the past year or year and a half, said Hill Baughman, the Gwinnett Department of Water Resources’ facilities director. It’s roughly tripled, in fact.

“We’re actually looking at several technologies right now to reduce the volume of solids we have and potentially the moisture content as well,” Baughman said.

Drying machines result in lighter and smaller biosolid mass. But it’s too early to say if any might drive up customers’ bills, because Gwinnett hasn’t made any decision on what it will do yet.

On the other side of the metro, Cobb Water Director Steve McCullers reports a similar situation: landfilling biosolids costs almost three times what it did about a year ago. It depends on several things, but in rough numbers, it’s gone from about $2.5 million per year to about $7.5 million.

“We are currently considering alternative biosolids handling approaches, none of which is inexpensive,” McCullers said. “We do have two incinerators which we mothballed several years ago. At this point, we’re evaluating the various options available with an open mind to regional solutions.”

McCullers said he understands that the county’s biosolid disposal contractor has even looked at landfills in other states. 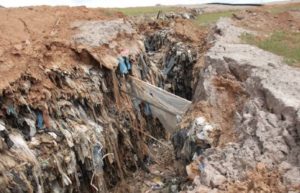 After this 2018 slope failure at the Eagle Point landfill, the state started reviewing landfill permits, and metro Atlanta utilities started seeing a rise in the price to dump biosolids in landfills. Credit: ARC handout

Landfilling biosolids has long been the most reliable, convenient and cost-effective option for communities, in part because burying hasn’t required the stuff to be as clean and dry as it could be, according to Michael Thomas, who’s with the Georgia Association of Water Professionals, and is the former general manager of the Clayton County Water Authority. Drying biosolids takes energy, he noted, and as for incineration, that’s got capital costs too and no community likes to see smokestacks on the horizon.

But landfill price hikes started happening after a 2018 slope failure at Advance Disposal’s Eagle Point landfill in Forsyth County. After that mini-landslide, the Georgia Environmental Protection Division scheduled landfill owners for permit reviews, starting with the ones that have taken the most sludge. (Technically, sludge is biosolids that haven’t been treated enough to reuse in any way.) Biosolids emit greenhouse gases and are more-or-less damp — both things that can undermine a landfill’s structure.

Environmental engineer Danny Johnson is watching what’s happening with wastewater treatment and biosolid disposal all over metro Atlanta — his business card has one side for the Atlanta Regional Commission and the other side for the Metropolitan North Georgia Water District, where he’s manager.

Johnson anticipates the higher landfill pricing is here to stay, and that metro Atlantans may feel it in their pocketbooks in the coming years.

Some communities may turn more toward an age-old answer: recycling. 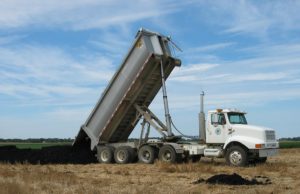 A typical application: a truck delivering biosolids to a field of stubble. Credit: City of Geneva/CC BY-NC 2.0

Biosolids are not manure, said Thomas. “It’s processed, solid. It does have a lot of fertilizer value in it.”

A lot of rules and requirements govern how biosolids can be applied to the land after incineration or composting, and exactly where and how different end products can be used. Biosolids are supposed to be heated and treated so that they won’t contaminate soil or anyone who touches it, and the end result can be different kinds of fertilizer ingredients, soil conditioners or other products.

For example, Gwinnett is part of one kind of fertilizer stream. It extracts magnesium, ammonium and phosphate from biosolids before the landfill and sells on those minerals as a fertilizer ingredient. Athens-Clarke County composts some of its biosolids. Outside Plains, ERTH Products composts biosolids with peanut hulls for its landscape products.

“The cost of the other alternatives are getting more competitive as the cost of landfilling is going up,” Thomas said.

But the federal government itself says that its controls over the land application of biosolids are weak and may not fully protect human health and the environment. In a scathing 2018 report, the Environmental Protection Agency’s Office of the Inspector General said the EPA consistently monitors biosolids for nine pollutants, but that it lacks the data and and risk assessment tools to monitor 352 more pollutants found in biosolids. In their research, the feds have found pathogens in biosolids as well as anything that humans may swallow or flush, like pharmaceuticals, steroids, hormones or illegal drugs. And they’ve found things like the flame retardants that coat some clothes and the chemicals that coat nonstick pans.

Back in metro Atlanta, the answer to biosolid disposal is going to be a case-by-case thing for each community, Thomas said.

For example, composting might not be best in urban areas because it takes a lot of space and can stink. Land application of treated biosolids might not be ideal if there’s no agricultural land nearby.

“The wastewater is flowing to the treatment plant every day. We can’t stop it,” Thomas said.

Cobb County explains all about water treatment, with pictures and maps

Every water professional will say food scraps belong in the garbage can, not the sink. All that food causes clogs and eventually is part of the biosolid load.

“Restrooms Over There” by Mr.TinDC is licensed under CC BY-ND 2.0