Atlanta city officials are considering a proposal to more than double the rate of impact fees assessed on new homes and commercial buildings. 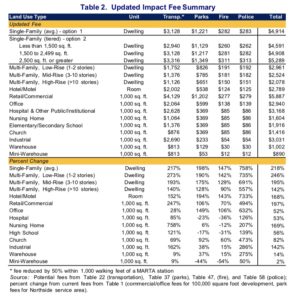 Atlanta would more than double the rate of impact fees assessed on most new homes and commercial structures under a proposal pending before the Atlanta City Council. Credit: Atlanta

Developers served on a review panel that endorsed the proposed higher fees. This would be the first increase in rates since Atlanta enacted impact fees in 1993.

Atlanta City Councilmember Matt Westmoreland, who chairs the council’s Community Development/Human Services Committee, said Wednesday the proposal seeks to balance a number of concerns. The committee has scheduled a virtual work session for Thursday at 10 a.m.

Concerns cited by Westmoreland include a potentially chilling effect on future affordable housing. The council in January authorized the borrowing of up to $100 million to help fund affordable units. Westmoreland observed: 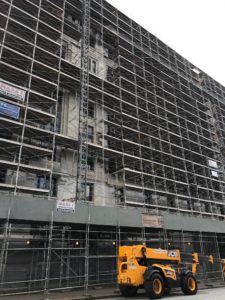 Commercial projects in Atlanta are eligible for exemptions of the higher impact fees being considered if the business creates a certain number of middle-wage jobs. Credit: Kelly Jordan

The proposal provides exemptions for affordable dwelling units and non-profit homeless shelters, and for businesses that create middle-wage jobs – defined as $38,000 to $80,000 in average annual salary.

Impact fees are cut in half for projects located within 1,000 walking feet of a MARTA station, according to the proposal.

If Atlanta wants to use any proceeds to expand facilities for public transit, the city should seek explicit authorization from the state before doing so, according to Duncan & Assoc., the consulting firm based in Austin, Tx. that produced the Impact Fee Study on behalf of the city.

In Georgia, local governments typically assess impact fees to pay for the impact a development has on the public amenities in the area where it’s built. The idea is that the new developments should help bear the cost of expanding public facilities to meet a growing base of business and residents. Atlanta’s fees are used to improve public roads, parks, and facilities for fire and police.

The proposed fee increases are intended to bring Atlanta’s fees in line with neighboring and peer cities. 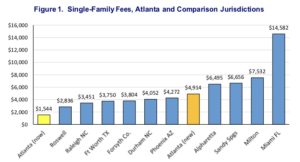 Even if Atlanta doubles rates for impact fees, three cities in North Fulton County would have higher rates than Atlanta. Credit: Atlanta

Another caveat is the proportion of the impact fee in relation to the sales price of a dwelling unit, according to Duncan’s report:

The city has tried twice to raise impact fees since they were first imposed in 1993. Rate-hike efforts in 2010 and 2017 did not result in any changes, according to Duncan’s report. 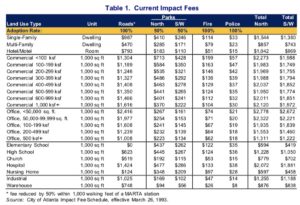 Atlanta has not changed the rate of impact fees assessed on homes and commercial structures since 1993. Credit: Atlanta

Previous Article
The Effects of Generational Poverty
Next Article
Georgia budget: Might be too conservative, or just conservative enough.