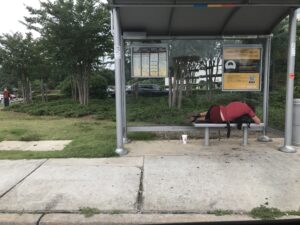 A telltale sign of a homeless person, or an urban camper, is napping in the daytime on a public bench, such as at this MARTA bus stop on Northside Drive. Credit: David Pendered

This is in addition to reports of “really extreme behavior” outside a nightclub, potential youth gang activity and an Atlanta Police Department that is 423 officers short of its authorized strength of 2,033 officers, topics that also were discussed.

All this is in addition to discussion of the shooting Sunday of a security guard at Lenox Square. Two 15-year-olds have been charged with attempted murder and other counts in connection with the shooting that left the guard critically injured.

“I wish I had an answer,” Todd Coyt, an assistant chief with APD, told the committee at Atlanta City Hall at about the same time Deputy Chief Charles Hampton was meeting with reporters at Public Safety Headquarters to discuss the shooting at Lenox Square.

Coyt’s comment was in response to the question about the possibility that Chicago-area criminals are marking turf inside the city. Atlanta City Councilmember Cleta Winslow asked the question that goes to the heart of why the violence of the past year has been so extreme, in comparison to memories of the past: 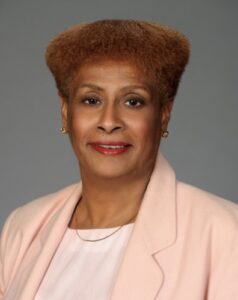 Atlanta Councilmember Michael Julian Bond asked about unruly behavior outside a club and what is being done to bring it under control. Bond then turned to questions about whether the suspects in the Lenox Mall shooting were charged as adults or juveniles, before shifting to ask about possible youth gang activities and the challenge of possible alternative interventions:

The question about a Chicago connection to the violence was just one of several questions Winslow brought forward. Homelessness was a common factor, including the case of a man chasing a girl and open defecation in city parks:

Some homeless folks appear to have moved into some city parks, Winslow said. There are no bathrooms in these parks, prompting Winslow to observe:

Coyt said APD’s HOPE Team is to intervene in such incidents and try to help the person causing issues who appears to be homeless. HOPE stands for Homeless Outreach Proactive Enforcement.