Atlanta developer John Williams – a friend to many – dies unexpectedly 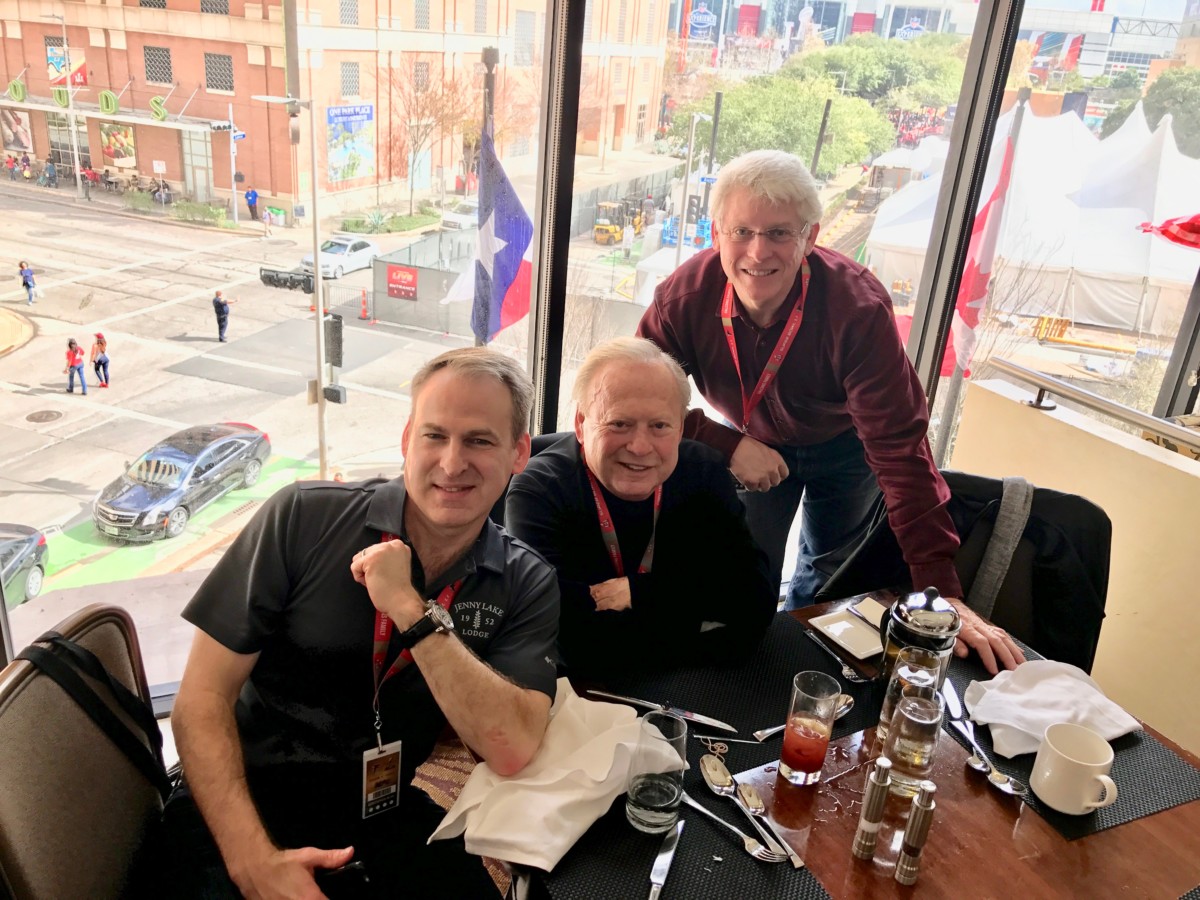 Updated: A memorial service to celebrate the life of John A. Williams will be held on Monday, April 23 at 2 p.m. at Peachtree Presbyterian Church at 3434 Roswell Road NW, Atlanta, Ga. 30305.  A reception will follow the service at the Cherokee Town Club at 155 W. Paces Ferry Road NW, Atlanta Ga 30305. In lieu of flowers, please consider making a donation to the Piedmont Heart Institute or a charity of your choice. The services will be live-streamed and can be viewed by clicking on this link.

John A. Williams, one of Atlanta’s most energetic developers, passed away unexpectedly Monday – leaving a big hole for many of us.

Williams founded Post Properties, a company he started in 1970 and ran until 2003, when a divided board led to his departure from the company. That was a painful time in his life, a time when Williams felt he had been betrayed by some of his closest friends. But Williams was not one to wallow.

Instead, he founded another company – Preferred Apartment Communities – which grew to a size that rivaled Post Properties. For Williams it was a source of pride. He had made lightning strike twice. 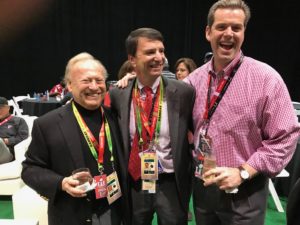 One time over lunch, John told me he could be dropped in Times Square with only $10, and he would be a millionaire within a year.

Williams was a rags to riches success story – someone who had had a tough childhood, but he was not one to make excuses. If anything, challenges made him more determined to prove he could bounce back.

(Please go to the bottom of this story to get the official news release from Prefereed Apartment Communities about his passing).

I first got to know John in the mid 1980s, when we got off to a combative start.

Williams had just bought a cluster of historic buildings on a triangular block known as Pershing Point (formed by the merging of Peachtree and West Peachtree streets north of the Woodruff Arts Center.

I had lived in one of those buildings in the early 1980s, and it was one of the most vibrant urban areas in all of Atlanta. One could basically live, work and play within that triangular block, which had restaurants, eclectic shops, a drug store and hundreds of residents.

Williams and a real estate partner bought the entire block, hoping to develop a building for IBM on that site. They were able to get a demolition permit, and they razed the entire block.

Needless to say, I was furious with John Williams. Until I met him and developed a close working relationship with him and his companies.

Williams was charming, and he was able to win me over. It didn’t hurt when he later confided to me that the biggest mistake in his career had been demolishing Pershing Point.

“I personally regret that more than anything else,” Williams told me in a 1998 interview. “If we knew then what we know today, we would have kept those apartments and remodeled and rehabilitated them. It had everything we are trying to create today.” 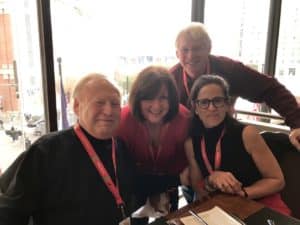 John Williams with his wife Nancy and his business partner Lenny Silverstein standing above his wife – Dr. Ellen Frauenthal at the Four Seasons Hotel in Houston in 2017 (Photo by Maria Saporta)

During the 1980s, 1990s and the 2000s, Williams was a major force in Atlanta civic community. He helped launch the Metro Business Forum with former Gov. George Busbee. Although his base was Cobb County, Williams was able to forge relationships with leaders throughout the region. His career started in DeKalb County; he built strong ties with Gwinnett developers, including Wayne Mason; he chaired the Cobb County Chamber of Commerce and the Metro Atlanta Chamber; he was regional leader – working with the Atlanta Regional Commission to create the Regional Leadership Institute, the annual LINK trips and endowing the Harry West Chair of Quality Growth at Georgia Tech.

Williams also made strong and loyal friendships with some of Georgia’s top business and political leaders – U.S. Sen. Johnny Isakson, former Georgia Gov. Roy Barnes, DeKalb County’s Liane Levetan as well as a series of Atlanta mayors. He actually flew former Mayor Bill Campbell to Dallas on his private airplane so Campbell would be part of the 1999 LINK trip.

Williams also developed a really close friendship with Arthur Blank – being a close ally to Blank when he was running Home Depot to when he bought the Atlanta Falcons. Both men lost control of the companies they had founded at roughly the same time – and Blank even had served on Post Properties board.

When he left Post to start Corporate Holding’s Preferred Apartment Communities, many of his former associates joined him. His new company often felt like a reunion of Post Properties – another example of how Williams was fiercely loyal to his friends and colleagues.

Somewhere along the way, Williams evolved from being a really good source to becoming my friend. We both enjoyed sharing observations about politics, and for several decades we would place bets on the outcome of elections – with the loser having to buy the other lunch. Let’s just say I bought more lunches than he did.

When we had lunch – our favorites spots were Veni Vidi Vici and later Blue Ridge Grill – we almost always interrupted with people coming by to say hello to John. That’s the way he was.

Williams also would let me hang out in his suite at the Georgia Dome, strategically located next to Blank’s suite. Let me just say, Williams was a great friend to have. 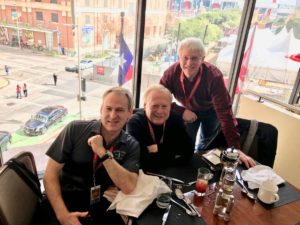 The 2017 Super Bowl in Houston was no exception. When Williams found out I was in town for the Big Game, he invited me to join his 13-member entourage of family and friends for Sunday brunch at the Four Seasons Hotel, the base hotel for the NFL. Actor Mark Wahlberg and Atlanta hip-hop artist Ludacris were just a few tables away.

Then Williams invited me to ride with them to NRG Stadium in a luxury smaller-sized bus. At one point, a police escort passed the bus, and Williams noted: “That’s Vice President Pence.”

When we arrived at the NRG complex, Williams and his entourage made sure I was able to “crash” the pre-game Atlanta Falcons tailgating party where Gov. Nathan Deal, Georgia Power’s Paul Bowers, CHOA’s Donna Hyland, Jerome and Stephanie Russell and a host of others were partying while Ludacris and TI performed. I didn’t see any other Atlanta media in the room.

Now I’m at a loss – caught flat-footed by his death.

John and I had planned to work together to write his biography. We kept putting it off – waiting for a time when both of our work lives were less demanding.

I had been looking forward to hearing his story and sharing it with others. We would have had such a good time talking about his life and how Atlanta had evolved over the 75 years of his life.

But we ran out of time, and that makes me incredibly sad. 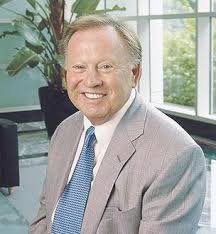 The Board and the Company are indebted to Mr. Williams for his strong leadership, real estate vision, outgoing personality and boundless energy.  The Board’s thoughts are with John’s family at this very difficult time.  Mr. Williams is survived by his wife Nancy; three children, Jay, Sarah Brook and Parker, and two grandchildren, Jack and Harrison.

Messrs. Silverstein and DuPree stated, “John was a dear friend, partner, mentor and influence in our lives and careers.  He was a visionary and understood the importance of creating a company that is built on culture, associates, reputation and brand.  We are committed to continuing John’s vision to create the preeminent real estate investment trust in the United States.”

About John A. Williams

Over the course of his career, Mr. Williams directed and coordinated the development, construction, and management of more than $15 billion in real estate developments.  Approximately $5.5 billion of this activity has focused on multifamily housing, with the balance in other property types including hotels, condominiums and offices.

Mr. Williams was listed on National Real Estate Investor’s list of “The 20th Century’s Most Influential Developers,” along with Atlanta Business Chronicle’s award for “Atlanta Residential Developer of The Decade,” for the 1990’s; followed by, Harvard Business School extending its “Community Leadership Award” to Mr. Williams in 2000. He has received numerous honors and awards from Cobb County, Georgia including, “The Mack Henderson Public Service Award,” in 2005.

Mr. Williams was recently inducted into the Multi-Housing News Hall of Fame: First Class in 2004, and given, The Four Pillar Award in 2007 by The Council for Quality Growth. John A. Williams is and has always been very active in varied philanthropic activities, outreaches, and organizations in Georgia and around the World.

In the spring of 2008, Mr. Williams was inducted into the Georgia State University J. Mack Robinson College of Business Hall of Fame as well as the Georgia Institute of Technology College of Management Hall of Fame.  He is widely credited with coining the phrases “Smart Growth” and “Live, Work, Play.”

Mr. Williams served on the Board of Directors of the Atlanta Falcons of which he is also a minority owner. He has previously served on the boards of Riverside Bancshares, Inc., where he was the largest stockholder, the Georgia Regional Transportation Authority, the Atlanta Regional Commission, Atlanta Convention & Visitors Bureau, Post Secondary/Vocational Education, the Executive Committee of the National Apartment Association.

While serving as the initial Chairman of the Cobb-Marietta Coliseum and Exhibit Hall Authority, Mr. Williams was responsible for leading the effort to build the $200,000,000 Exhibition Meeting Venue and Ballroom complex. The large ballroom, one of the largest in the south, was named “The John A. Williams Ballroom.” These facilities were completed in 1995. He also led the effort to build the state-of-the-art Cobb Energy Performing Arts Centre which cost $150,000,000. The 2800 seat main theatre is named “The John A. Williams Theatre.”

At December 31, 2017, the Company was the approximate 97.8 perent owner of Preferred Apartment Communities Operating Partnership, L.P., the Company’s operating partnership.  Preferred Apartment Communities, Inc. has elected to be taxed as a real estate investment trust under the Internal Revenue Code of 1986, as amended, commencing with its tax year ended December 31, 2011.  Learn more at www.pacapts.com.