The Atlanta Falcons’ first game of 2012, at the Georgia Dome Sunday against the Tampa Bay Buccaneers, comes on a day of resolutions. New Years will resonate in Section 303, where a bunch of highly determined local kids spent 2011 sweating their way to those seats and other rewards. 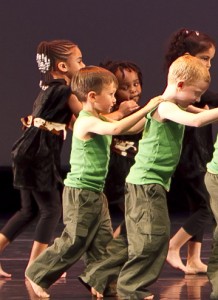 Sam Delp in the 2011 performance of "Between Worlds" at The Rialto Center for the Arts (Credit: JD Scott)

Occupying 25 seats will be dancers (and their guests) from Moving in the Spirit, a team based a few miles from the Dome in Grant Park that has served economically challenged youth for more than two decades. The dancers, aged 3 to 18, spent the past year earning points by completing daily sit-ups and push-ups, being focused, and showing up, practice after practice.

Earlier this month, their sweat equity points turned into buying power at their Holiday Store, stocked with donations from sponsors such as the Falcons’ owner’s nonprofit, the Arthur M. Blank Family Foundation.

The work ethic and energy of the dancers from Moving in the Spirit is remarkable. Every day they are moving against the tide of childhood obesity, too common in poorer neighborhoods. Their personal work ethic contrasts to the cheating educators in the Atlanta Public Schools, where many of these dancers learn. Their Holiday Store helps teach them financial literacy and credit lessons that too few of us grasp. 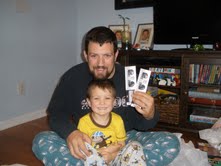 Sam Delp, 4, danced all year to earn points traded for two Jan. 1 Atlanta Falcons-Buccaneers tickets. He gave them to dad Jeff for Christmas.

The dancers, of course, see their work more simply.

“If I watch too much TV, my brain gets mushy,” said Sam Delp, 4, in pre-K at the Ormewood School, who traded points for two tickets for a Christmas gift to his dad Jeff.

“It’s hard work but at the end, it pays off,” said Iesha Weston, 14, a ninth grader at KIPP Atlanta Collegiate who for Christmas gave two tickets to her dad Dontay. “He’s never gone to the Falcons. He’s just seen it on TV. He’ll be so excited about it.”

The dancers and parents will watch a team that has secured its fourth consecutive winning season. In the NFL, only the most physically talented earn a paycheck. The rest of us are spectators, and the obesity crisis suggests that too many of us – children especially – prefer our activity on screens.

“Only a few students make the cut for teams in football, basketball or baseball,” points out Blank Foundation vice president John Bare, who leads the work of the Atlanta Falcons Youth Foundation, which donated the tickets and since 1988 has donated more than $300,000 to Moving in the Spirit. “Without organizations like Moving in the Spirit, the large majority of young people might never have opportunities to take up healthy physical activities that they can pursue for the rest of their lives.”

Moving in the Spirit co-founder and executive director Dana Marschalk Lupton started the Holiday Store in 1990 as an incentive for the older teens, known as the Apprentice Corporation, and then for all of the dancers as a teaching opportunity.

“The idea first came to me through one of our Apprentice Corporation members, Hatquoter Morris, when we were in line to check out at the [DeKalb] Farmers Market,” Lupton recalled. ‘I asked her if she wanted to fill out my [bank] check and her face swelled with panic.  I talked her through the process. Later in the parking lot, Hatquoter started asking me questions about checking accounts. 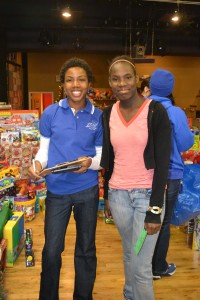 An epiphany dawned on Lupton.

“I said, ‘Hatquoter, we have been trying to figure out a system to reward all the hard work of our dancers, and you have just come up with it. A check book!’” Lupton said. “Joyce Marschalk, my mother, and Mary Rose Taylor, my mentor who was the first woman news anchor in Atlanta, were the first two donors for the store.”

Dancers earn points by meeting their commitments. Older ones learn how to record and track their points in a “checkbook.” At the Holiday Store, a personal shopper helps them calculate their points as they spend and shop for their families and friends. Items included a $200 Target gift card, cordless drills for dads, MP3 players. A “cashier” makes sure they’ve spent within their means. For many, this is their only way to afford gifts.

“I got a sticker book and a puzzle of Dora the Explorer for my sister Maya, and Playdoh and some other presents for my cousins,” Sam Delp said. “I earn points for being good. It’s easy.”

Iesha Weston used her 1794 points to shop for her parents and five younger siblings, and even had points leftover for an MP3 player for herself. The tickets for her dad, a mail career, acknowledge how much he provides for them, and her gratitude. The tickets show how much power she feels from dancing.

“I chose to dance because I want to experience new things and see and learn something new,” she said. “”We put hip hop and modern together, and make up our own dances … the points show that I am putting my all into it.”

For Lupton, the tickets celebrate “a whole year of work based around an incentive system that emphasizes commitment, responsibility and meeting personal goals. Our partnership with Atlanta Falcons Youth Foundation is a key part of what makes this whole experience possible for our students, and the tickets offered at the Holiday Store symbolize and honor their achievements.” 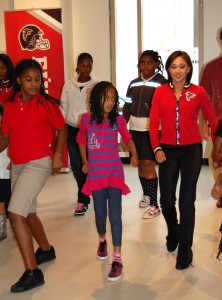 Moving in the Spirit is one of more than two dozen partners in the Falcons Fitness Zone, which helps more than 10,000 kids each year spend more time moving their bodies. Other partners include the Atlanta Track Club’s Kilometer Kids, the Boys and Girls Clubs and the YMCA.

In the Dome, the dancers will watch the Falcons, who are picking themselves up after getting blown out on Monday Night Football by their longtime rival, the New Orleans Saints. The Falcons failed early expectations, then caught momentum to win seven of nine games to secure a playoff spot. Plenty of resolve to go around.

“Just as Falcons players work long and hard behind the scenes to prepare for a handful of performances in the Dome, Moving in the Spirit students commit to year-round work developing their bodies, their minds, and their peer relationships,” Bare said.

Besides the rewards of performing and gift shopping, Bare said, “there is another kind of payoff, an internal one, where Moving in the Spirit students develop within themselves the strength and resolve to overcome most any barrier they encounter, at school, at home or with friends.”

As Dome spectators on New Years, the dancers inspire us to be doers, not just watchers. I asked Weston who worked harder – the dancers, or the Falcons. She wisely replied: “Both of us.”

Previous Article
For Georgia to have a fair tax structure, income tax on the wealthiest should increase
Next Article
Fractional sales tax for the arts legislation on hold until after transportation vote