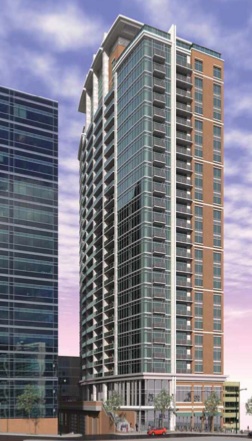 A dormitory that’s designed to give a leg up to budding entrepreneurs is to be built at Technology Square, in Midtown, with financial aid from Atlanta’s development arm. 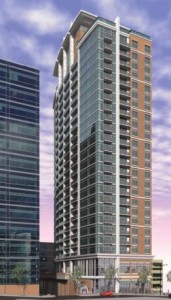 Invest Atlanta has agreed to fund up to $70 million in construction costs of a 230-unit building dubbed, “Tech Square Tower (the Entrepreneur Dorm)”. Only three similar dorms exist in the nation, according to Invest Atlanta – at Stanford, Columbia, and New York universities, with one more to open in 2015 at University of Florida.

The concept is to provide turn-key housing for students who hope to develop some sort of innovative idea, as well as for entrepreneurs who have an office at Tech Square. Residents are to mingle and brainstorm and have access to an on-site mentor, according to the presentation to the board of Invest Atlanta.

The dormitory is to be developed by Gateway Developers and South City Partners, two companies that bring deep experience in the Midtown market.

Gateway is developing Centergy, the 12.5-acre project that’s just south of the planned dormitory. South City Partners was formed in 2011 to develop multi-family residential by John Long, formerly of the Novare Group, and Mark Randall, formerly of Wood Partners.

The planned dormitory is portrayed by Invest Atlanta materials as a place where lofty dreams of entrepreneurial success can come true:

Monthly rental prices for a fully furnished unit, with utilities, are to range from $1,035 for a one-bedroom unit, to $2,565 for a four-bedroom unit. 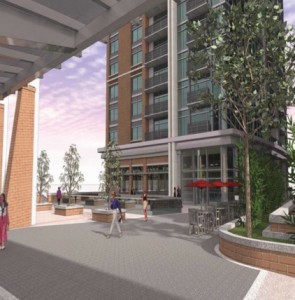 This rendering of the planned Tech Square Tower illustrates how it will articulate with its surroundings. Credit: Invest Atlanta

Of the 230 units, 23 are to be set aside at affordable prices, which the developer defines as a discount of $105 a month for each of the four price levels.

Atlanta Mayor Kasim Reed, who chairs Invest Atlanta’s board, cited the dorm’s planned affordable housing units as he emphasized his interest in holding developers accountable for providing the number of units they promise when they seek city funding assistance.

Invest Atlanta has required for years that developers who receive funding from the city reserve a certain number of homes in a project at rates lower than the market price.

The extent to which those promised units are made available is the stuff of urban legends – and the point of the mayor’s comments about enforcing compliance.

“People get amnesia,” Reed said during the board’s deliberation of the proposed $70 million inducement resolution at its July 17 meeting. “I don’t like it, and it’s going to stop.

“We send police or teachers or firefighters [to subsidized developments] and they’re told – ‘Those space are gone,’” Reed said. “They provide no information. They don’t tell you who took those spaces.”