Superheroes of Planet Earth – young and seasoned – came together for the Captain Planet Foundation’s Benefit Gala of 2014 — all with a similar theme.

The earth is a special place. Let’s not destroy it.

The most super of the night’s Superheroes was Dr. Jane Goodall. 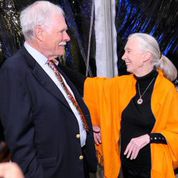 Goodall, founder of the Jane Goodall Institute, began studying the behavior of chimpanzees in what is now Tanzania almost 55 years ago. She has become one of the world’s most authoritative advocates to protect animal habitats and for global environmental awareness with community-centered conservation.

And although she is in her 80th year, Goodall is still traveling 300 days of the year – primarily to promote her Roots & Shoots nonprofit – a global environmental and humanitarian youth program.

Upon accepting the Captain Planet Foundation’s Exemplar Award at the InterContinental Hotel in Buckhead on Dec. 5, Goodall said she knew when she was a young chlld, she wanted to live in Africa among the animals.

Instead of talking her out of her dream (which was most unusual for a girl especially during that generation), her mother supported and encouraged her.

And her life has been dedicated to improving the global environment ever since.

“We all know that this world is a mess,” Goodall said “As we continue to destroy the environment, we destroy the very system that allows us to survive.”

That includes everything from the oceans, the air to the forests.

Goodall said she was fascinated by the chimpanzees because they were the animals that were most like humans. The big difference is that humans have had explosive development of their brains.

“We make an impact on the planet,” said Goodall, who looked toward Atlanta’s own international hero Ted Turner, who was in the room. “My long-time friend Ted Turner has been saving bison.” She said she believed in the resilience of nature to a large extent.

Goodall said she still has hope for the future because of the intellectual capabilities of human beings when compared to other forms of life.

“We can talk about the past. We can plan the future,” she said. “How is it that the most intellectual creature on the planet is destroying its environment?”

As more people begin to understand what is at stake, she is hopeful global leaders will act in the earth’s best interests.

“I feel we have a window of time,” Goodall said. “I feel that there’s a growing awareness around the world, but we are not doing anything about it.”

Perhaps that’s where the younger generations come in.

Carter & Olivia Ries won the Young Superheroes for the Earth Award. Carter, 13, and Olivia, 12, started their own nonprofit in 2009 called “One More Generation” when they realized that many animals were in danger of becoming extinct.

During the BP Gulf oil spill in 2009, the siblings spent four months collecting animal rescue supplies and delivered them to the region.

That was only the beginning. The two have developed a weeklong curriculum that teaches the next generation about plastic pollution and how they can be part of the solution.

The two have traveled to South African twice, and they have been invited by the U.S. Embassy in Hanoi to be guest speakers at an international conference in Vietnam to talk about rhino poaching. They also are working on a documentary about trying to save the species.

Both children spoke to the audience – urging adults to believe in the power of what young people can do.

“Our goal is to help others realize that they have the power to effect change,” Carter Ries said. “Someone told my sister and me we could make a difference.”

The other award given that night was to Dr. Marshall Shepherd, director of the University of Georgia’s Atmospheric Sciences Program, who won the Protector of the Earth Award.

Shepherd is an international expert in weather and climate. He also served as the 2013 president of the American Meteorological Society.

While accepting the award, Shepherd spoke about the unusual weather incidents that have been occurring – a typhoon in the Philippines eight feet of snow in western New York, ships sailing in the once-frozen Arctic Ocean, etc.

It doesn’t matter whether you are a Democrat or a Republican, liberal or conservative.

“This is not a political issue,” Shepherd said. “This is a human issue. The earth is indicating something to us. We have to increase climate literacy. Heal the earth…. The earth is sending us signals.”

And when it comes to climate change, Shepherd simply said: “It is not a hoax; it is real.”

The Captain Planet Foundation Gala is a true family affair. Captain Planet was founded by Ted Turner, when he ran Turner Broadcasting System. He started the Captain Planet cartoon to help spread the message of environmental stewardship to younger generations.

The chair of the foundation is Turner’s daughter – Laura Turner Seydel. Turner came in support of both her and the foundation. So did her former stepmother – Jane Fonda as well as numerous other dignitaries – from former CNN host Larry King to former Coca-Cola CEO Neville Isdell.