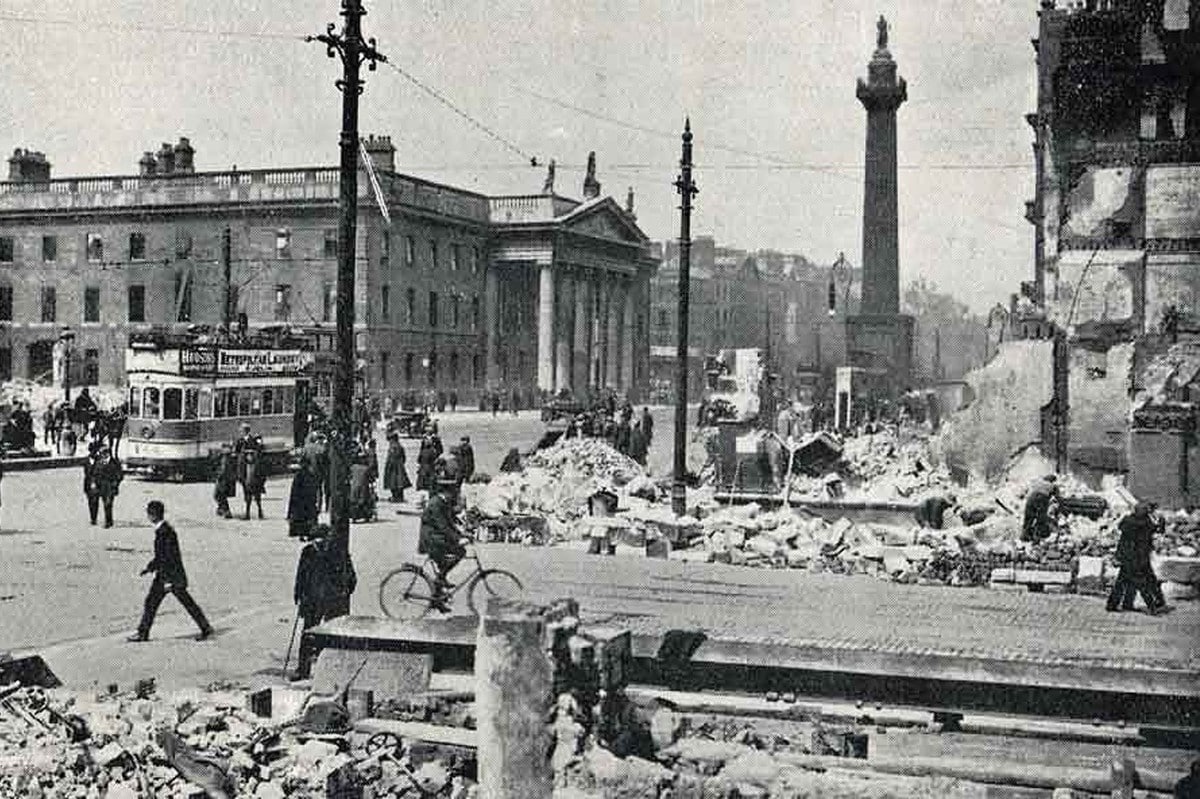 This week, guest columnist MARILYNN RICHTARIK, professor of English at Georgia State University shares the story of Ireland’s Easter Rising of 1916 and the ways Atlanta is commemorating its centenary.

100 years ago this month, after a small group of activists seized key buildings in central Dublin during the Easter Monday holiday, poet and schoolmaster Patrick Pearse stood outside the rebels’ headquarters in the General Post Office and read aloud a Proclamation declaring an Irish Republic to a handful of bemused passers-by. Within days, the British Army had quashed the Rising; within weeks its most prominent leaders had been summarily executed. This brutal reaction, though, turned what had been a fringe movement in favor of the complete separation of Britain and Ireland into a popular cause with martyrs. As Irish poet W. B. Yeats put it in “Easter, 1916,” a “terrible beauty” had been born.

Throughout 2016, Ireland is commemorating the centenary of the Easter Rising in an exercise in remembering similar to our Bicentennial in national importance—and one that, like the Bicentennial, has been marked both by high patriotism and a popular culture frenzy (who else remembers the fire hydrants painted to resemble miniature Minutemen?). State ceremonial events over Easter weekend climaxed in a grand parade through Dublin involving 3,700 members of the Irish Defence Forces, 4,000 descendants of rebels, and what an Irish friend described to me as throngs of people “in various stages of commitment to period dress/songs/food.” 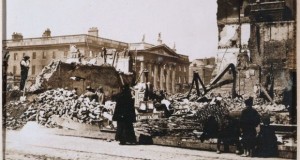 Dublin’s General Post Office in the aftermath of the Rising

Contemporary Ireland’s relationship with its foundational moment has been complicated by what came after it: a guerrilla-style war of independence; a settlement that resulted in the partition of the island, leaving six counties of Ireland (the part known as Northern Ireland) in the United Kingdom; a vicious civil war between rebels who accepted the terms of the settlement with the British and those who wanted to keep fighting; and the Troubles, a period of terrible conflict that gripped Northern Ireland in the 1970s, ‘80s, and early ‘90s, prior to the implementation of a US.-backed peace agreement.

This contentious aftermath explains why the present Irish government is making a particular effort to ensure that this year’s events recognize all shades of Irish opinion at the time, not least the views of the majority opposed to the Rising when it took place. The centenary observances, for example, are being presented as part of a Decade of Commemorations that includes remembrance of World War I. 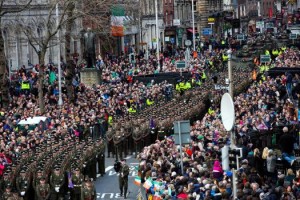 The government has also tried to involve in the festivities anyone claiming Irish descent, or merely an interest in the place, by sponsoring centenary events around the world — including many here in Atlanta. Commemorations are as much about the future as about the past, explains Shane Stephens, Consul General of Ireland in Atlanta. The centenary, Stephens says, presents “an opportunity for people to look back at a seminal moment in Irish history, reflect on what Ireland has achieved over the last 100 years, and re-imagine our future.”

The problem of how to interpret an event that means wildly divergent things to different people resonates strongly here in the South, where we are still debating — and living with — the legacy of the Civil War. Former president of Coca-Cola Donald Keough may have been partly inspired by these parallels when he and his wife, Marilyn, envisioned what has become the Keough-Naughton Institute for Irish Studies at Notre Dame University. In preparation for the centenary, the Institute produced the three-hour documentary on the Rising that recently aired on both local public television stations, and the Irish Consulate will be hosting a special screening of the condensed cinema version on April 15 at the Plaza Theatre, in Keough’s memory. 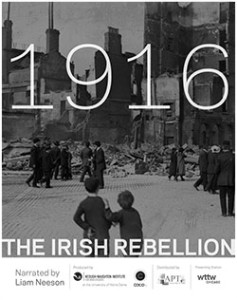 Atlanta’s Plaza Theatre will screen the documentary 1916 The Irish Rebellion.

Although Georgia State University, where I have taught since 1995, does not have the strong heritage connection to Ireland that Notre Dame does, our students, from their varying backgrounds, have eagerly embraced the Emerald Isle, perhaps subconsciously picking up on its affinities with the American South. Because their interest is new, they come to it largely without preconceived ideas of what “Irish” identity entails, and they have been taken with the youthful, forward-looking, diverse nation that is Ireland today while simultaneously learning about its history and culture. In the English Department, where my former colleague Margaret Harper (now Glucksman Chair of Contemporary Writing in English at the University of Limerick) introduced graduate and undergraduate Irish literature courses into the curriculum over twenty years ago, I have seen interest in Ireland growing steadily of late.

A contributing factor has been our increased commitment to making short-term study abroad experiences available to our students, many of whom are juggling careers and family obligations along with their classes. In 2013 and 2014, Senior Lecturer Jody Brooks taught three-week Maymester courses on the literature of the British Isles, spending one week each in London, Edinburgh, and Dublin, where, she recalls, “We read and discussed ‘Easter, 1916’ while sitting in the Garden of Remembrance then went to Kilmainham Gaol” for a tour of the place where the rebels were briefly imprisoned. Her charges “stood for a long time by the spot where James Connolly was tied to a chair and shot. First time I’ve ever seen students silently crying.” 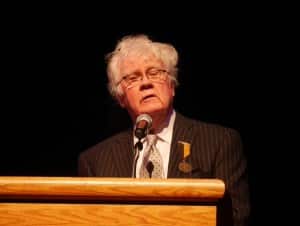 Jim Flannery, Emory Professor Emeritus and Executive Director of the W.B. Yeats Foundation, read Yeats’s “Easter 1916” at the 1916 Centenary Concert hosted by the Irish Consulate at Georgia Tech on March 6.

Last year, Professor Tanya Caldwell took a group of students to Dublin for a week over spring break. A highlight was a guided bus tour from Dublin to Belfast, which, she says, “underscored to us the extent to which Ireland’s [historical conflicts] are still very present to every Irish person.” In June, Associate Professor LeeAnne Richardson will lead a two-week program to Dublin and Belfast focused on what she describes as “English and Irish literature that prefigures, rises out of, or comments upon events affecting Ireland from 1914-1918.”

This week, I am hosting the Southern regional meeting of the American Conference for Irish Studies at Georgia State University. The theme, Pre-Revolutionary Ireland, invites participants not only to consider the periods of ferment leading up to any historical transformation, but to contemplate what might be next for Ireland. We have partnered with Georgia Humanities, the Irish Consulate, and Emory University to present two public lectures on the centenary theme.

On Thursday, April 14, at 5:00 p.m., Roy Foster, Carroll Professor of Irish History at the University of Oxford and one of Ireland’s most prominent public intellectuals, will deliver a keynote address that doubles as this year’s College of Arts and Sciences Plummer Lecture. Endowed in 1999 in honor of the late Atlanta arts patron Hellen Ingram Plummer, the Lecture brings to GSU speakers “who have made notable contributions to their field of achievement and to society at large.” Foster will talk about the forging of a revolutionary generation in Ireland between 1890 and 1916.

On Friday, April 15, at 2:00 p.m., Roisín Higgins, an Irish historian currently serving as the historical advisor for the Commemoration Zone of the permanent exhibition in the General Post Office, will draw on her insider’s knowledge of centenary preparations to discuss the politics of commemorating the Easter Rising.

Both lectures are free of charge and will take place in the Speakers Auditorium of the GSU Student Center, 44 Courtland Street, Atlanta.

Marilynn Richtarik is a Professor of English at Georgia State University, where she regularly teaches graduate and undergraduate courses on Irish literature, and the author of two books published by Oxford University Press: Acting Between the Lines: The Field Day Theatre Company and Irish Cultural Politics 1980-1984 and Stewart Parker: A Life. Over the years, she has brought world-renowned Irish scholars and creative writers, such as Seamus Deane, Bernard MacLaverty, and Nuala Ní Dhomhnaill, to Atlanta. She will spend the spring semester of 2017 as a Fulbright Scholar at Queen’s University Belfast, teaching two classes and doing research for a book about literary reactions and contributions to the peace process in Northern Ireland.