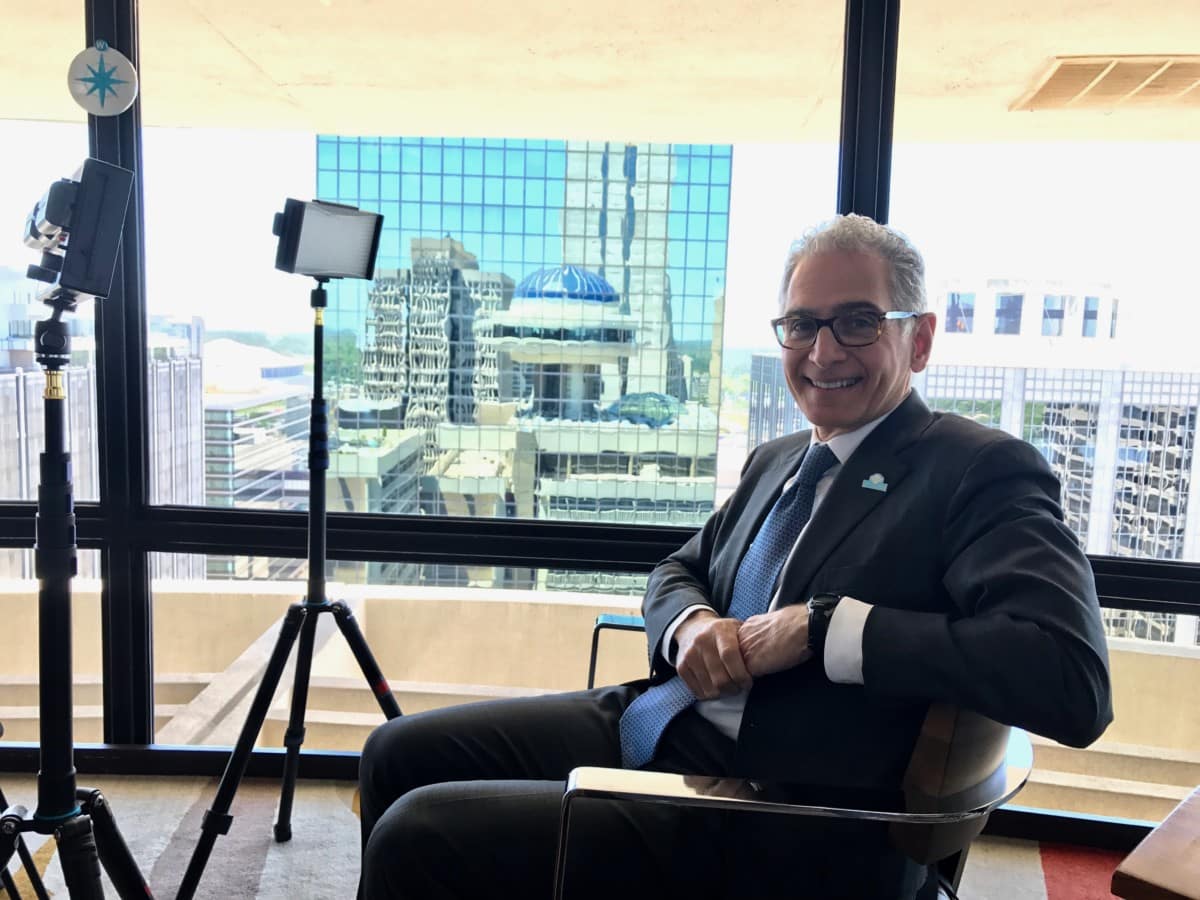 Mark Hoplamazian, president and CEO of Hyatt Hotels Corp., sits for an interview while sitting in the Hyatt's Polaris Lounge (Photo by Maria Saporta)

By Amy Wenk and Maria Saporta
As published in the Atlanta Business Chronicle on May 5, 2017

The Hyatt Regency Atlanta, with its iconic blue-domed revolving restaurant, has long defined the downtown skyline.

But the city’s second-largest hotel also turned the tide for what today is a giant hotel brand.

The 1,260-room hotel on Peachtree Street this week celebrated its 50th anniversary. Top hotel executives were in town to mark the occasion with two days of events, including Mark Hoplamazian, president and CEO of Hyatt Hotels Corp. 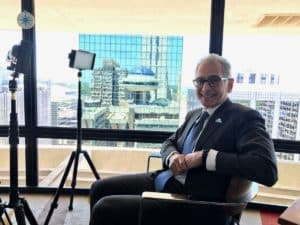 Mark Hoplamazian, president and CEO of Hyatt Hotels Corp., sits for an interview while sitting in the Hyatt’s Polaris Lounge (Photo by Maria Saporta)

“There’s no question that this hotel really was a critical inflection point for Hyatt,” Hoplamazian said in an interview with Atlanta Business Chronicle, sitting in the Hyatt Regency’s revolving restaurant, the Polaris. “Up until this hotel, Hyatt was essentially a motel company. Its roots really were with airport motels.

“This was really something altogether different,” he said of Atlanta’s Hyatt Regency, the very first in the hotel company’s largest brand. “It was urban. It was in the middle of the city. It was a huge hotel … It served a customer base that was different.”

Opened in 1967 and designed by renowned Atlanta architect and developer John C. Portman Jr., the Hyatt Regency Atlanta broke the mold for hotel design, featuring an impressive 22-story interior atrium. It would influence hotel design for decades to come.

“Following this hotel, John really went on an incredible, very rich tear of amazing design,” Hoplamazian said. That included Hyatt Regency hotels in cities such as Chicago and San Francisco. “It put Hyatt on the map … this identity as being the atrium hotel company.”

But at the time the Hyatt Regency Atlanta opened, many had doubts, including other large hotel brands.

“They called it the concrete monster, and they thought it would not fly,” Peter Sears, Hyatt’s group president of the Americas, said at a May 1 event.

But Hyatt recognized its potential. It still owns the hotel today. “Where others saw the present, they saw the future,” Sears said. “It changed the hospitality industry.” The hotel’s Polaris restaurant and its innovative atrium were instant hits. “The first week, there were so many people coming into the hotel just to catch a ride to the top and see Atlanta,” Hoplamazian said. “It went extremely well from the beginning.”

The Hyatt Regency also was among the first hotels in Atlanta to open its doors to the Civil Rights Movement. “I think this hotel and the role it played in Atlanta … personifies this idea of inclusion and understanding,” Hoplamazian said. “It remains this special place both in our history and what it meant to the community.”

The Hyatt Regency added new towers in 1971 and 1982. In 1996, it built the Centennial Ballroom, the largest in the state. In 2014, it reopened the Polaris after it had been closed for a decade.

Now, a roughly $10 million renovation is planned for the Hyatt Regency, said General Manager Peter McMahon. That work could kick off in July with the renovation of about 330 rooms in the hotel’s International Tower. Following the annual Dragon Con convention on Labor Day weekend, a renovation of the 200 rooms in the Radius Tower should start.

Hoplamazian also shared his impression of the local hotel market. In 2016, Atlanta ranked Hyatt’s No. 5 market in the U.S., representing about 6 percent of its earnings last year. “Our feeling is this market has just continued to grow in importance,” Hoplamazian said. That’s due to the corporate growth in the city’s core and the strength of Atlanta’s convention business, he said.

Hyatt could look to bring new brands to the market such as its lifestyle flags, Andaz and Centric, and possibly its upscale Park Hyatt. Today, the company has a total of 13 brands, and as of Dec. 31, it had 698 properties in 56 countries.

“We are still growing here,” Hoplamazian said. “Atlanta is one of those markets you can actually imagine having every one of our brands represented.”