The board of the Atlanta Housing Authority is scheduled to meet Wednesday Jan. 30 afternoon— one that could be Renee Glover’s last as the organization’s president and CEO.

It is thought that Glover and the AHA board will say that they’re parting ways, and the board is expected to vote on her separation agreement. 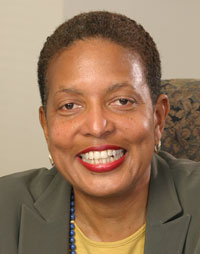 This day has been coming for more than 15 months. When Atlanta Mayor Kasim Reed took office, he never sought to work with Glover, who has been nationally recognized for transforming the city’s public housing landscape during her 18 years at the helm.

The AHA board had renewed Glover’s contract in summer of 2010 — a move that displeased the mayor, who has said he doesn’t believe in employment contracts.

Reed replaced several AHA board members — including naming his campaign backer Dan Halpern, who is now serving as AHA’s chairman.

Halpern has been on record of wanting Glover to step down as AHA’s CEO, but she let it be known she had several years left on her contract.

Halpern did not return a phone cal Tuesday evening..

According to a couple of people who have been closely observing the Glover-AHA situation, Glover’s last day with the housing agency could be as soon as Jan. 31. A new interim leadership team could be announced as soon as Wednesday’s board meeting.

Glover’s departure had been expected to take place in the last few months of 2012. But there have been several vacancies on AHA’s board, and it proved difficult for the board to get enough members to have a quorum to vote on a separation agreement.

Apparently, Glover has not been seeking another job until the situation with AHA was resolved. Over the years, Glover has become a national leader in public housing and development circles.