The founding headmaster of the Atlanta International School lived just long enough to see his beloved school break ground on a building that will be named in his honor.

Miles “Alex” Horsley died Dec. 1 at his home after a “spirited” battle with cancer, according to an email that the school sent out on Friday. A memorial service in Horsley’s honor is planned for Jan. 14, 2012. 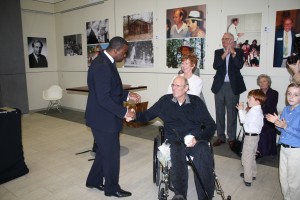 Here is a copy of the email that the Atlanta International School sent today:

Miles Alexander “Alex” Horsley died December 1, 2011 at his home in Atlanta after a spirited battle with cancer. A linguist, teacher, headmaster, and international education consultant, Alex was an adventurous, broad-minded visionary whose hard work, persistence, and good humor inspired countless students, teachers, and fellow educators during a 45-year career that spanned six continents. Students remember him as larger than life, often calling him “the Gentle Giant.” He remained endeared to them because he always put them first, taking a genuine interest in each one.

A frequent chair of accreditation teams for the Council of International Schools (CIS) and champion of the 42-year-old International Baccalaureate Organisation (IBO), with its international curricular framework that eases the transition of students from one international school to another throughout the world, Alex was a passionate advocate of multilingualism. He believed that every student deserves to be prepared for life in an increasingly interdependent world. His chapter “Acquiring Languages” for the IBO’s 2011 book, The Changing Face of International Education, was the latest of his many articles and speeches on the subject. He delivered the keynote address at the Global Language Convention (GLC) in Singapore in 2006 and was invited to organize the 2008 GLC in Atlanta as executive director of the Center for the Advancement and Study of International Education (CASIE).

Undoubtedly, Alex was proudest of his role as founding headmaster of Atlanta International School (AIS), which he led during its formational first 10 years. The school’s Early Learning Center, scheduled to open in August 2012, is named the Alex Horsley Building in his honor. Alex’s last public appearance was at the November 15th ground-breaking ceremony, where he was celebrated by the AIS community and Atlanta’s Mayor Kasim Reed for his tireless devotion to the school. AIS began in 1985 with 51 students and today thrives with more than 1,000 students from over 70 countries and faculty from 45 countries.

Born January 24, 1944, in Hull, UK, Alex grew up in nearby Hessle. He first traveled abroad at age 13, living with a Swiss family to learn French, and spent more time abroad at age 15 to learn German. These early immersion experiences forged a lifelong love of learning languages, traveling, and exploring new cultures. He studied modern languages at Oxford University’s Worcester College, where he played on the college’s soccer team. Politically active, he was a member of the Campaign in Oxford University for Nuclear Disarmament (COUND) and the Joint Action Committee against Racial Intolerance (JACARI), Oxford’s anti-apartheid movement. He was graduated in 1965 with a joint honors degree in French and German. In addition, he holds an MA from Oxford (1975), a postgraduate certificate of education from London University (1974), and a postgraduate degree in education management and curriculum design from University of Hull (1978).

With his young family Alex traveled to New Zealand where he took his first teaching post in 1965 at Auckland Grammar School and three years later taught in a parochial school in southern India. He returned to Hull in 1971, where he taught at three local high schools, eventually heading the department of languages at the inner-city David Lister High School.

Alex moved with his family to the United States in 1978 to assume the position of head of languages at Baltimore Friends School, which appealed to him because of his Quaker background. He secured his first headmaster position at Friends School Mullica Hill in New Jersey (1981-85). In 1985, he answered a call to head a new international school in Atlanta that was being launched by a small group of inspired parents with no money, building, or students. Atlanta International School began as a prekindergarten (4K) to 1st grade school in a small army hut behind a church. It grew rapidly, every year adding grades, until it spanned 4K through 12th grade. Alex shepherded AIS through three locations and building campaigns, and by the time he moved to Beijing in 1996 to become director of International School of Beijing (ISB), he had overseen AIS’s move to its current and final home in a historic Atlanta building.

From AIS, Alex and his wife Gillian embarked on a Far East passage. He served first as director of ISB (1996-98) and then as head of the Chinese International School (CIS), Hong Kong (1998- 2002). By then well known for his broad experience in international education, he was sought out as a consultant to international schools in Germany, the US, Thailand, Philippines, Singapore, Hong Kong, and Mongolia. He also led accreditation teams for CIS in schools in France, Venezuela, the US, Indonesia, Belgium, Australia, and Portugal.

Returning to Atlanta, Alex was from 2002 to 2004 executive director of the Atlanta Youth Soccer Association (AYSA) and was instrumental in the building of an inner-city field that has been enjoyed by hundreds of youngsters. From 2004 to 2008 Alex served as executive director of CASIE, a consultancy service to support implementation of IB programs throughout the United States. From 2009 on, he worked as an educational consultant, continuing to write, speak, and offer support to develop dual-language schools in Africa (Morocco, Gabon, and Kenya), specifically as a consultant to the Aga Khan Academies and Global Education Management Systems (GEMS).

Alex served on numerous boards, including those of the Alliance Française, New Era Schools Trust (pioneers of interracial education in South Africa), the Association of French Schools in North America (vice-president, 1991-94), and Friends School of Atlanta (chair, 2004-09). Fluent in French and German, Alex also has oral fluency in Spanish and Chinese and working knowledge of written Italian, Dutch, and Russian.

A memorial service will be held at Atlanta International School on January 14, 2012 at 2:00 p.m. in the auditorium, with Mary Ann Downey officiating. Afterward, the family will meet friends for a reception in the exhibition space of the Adair Art Science and Design Center.

In lieu of flowers, contributions may be made to the Alex Horsley Fund for Language Learning at Atlanta International School by e-mailing Mary Denson in the AIS Development Office at [email protected] For further information, please call 404-841-3895

About Atlanta International School:
Atlanta International School (AIS) offers all three International Baccalaureate (IB) programs to more than 1,000 U.S. and international students from four-year-old kindergarten to grade 12. By delivering a rigorous academic program combined with world-class standards in language acquisition within an open-minded, intercultural environment, AIS prepares students to succeed in a globally connected world. The school was founded 26 years ago by a group of parents, international educators and members of the business community whose aim was to provide the Atlanta area with the kind of international educational opportunities found in major cities throughout the world. Support from major corporations and public figures was obtained because of the school’s importance in the development of Atlanta as the premier international city in the southeastern United States. AIS is accredited by AdvancEd and the Council of International Schools (CIS) and is authorized to offer IB programs by the International Baccalaureate organization. The school is located in the heart of Buckhead at 2890 North Fulton Drive. Additional information is available at www.aischool.org.

Previous Article
Atlanta History Center picks NYC’s Pfeiffer Partners as architectural redesign team
Next Article
‘My week with Marilyn’ movie: the ‘Marilyn’ part is delicious; the ‘week’ part – not so much