Editor’s Note: This story was updated with information provided Friday by the office of Atlanta Mayor Keisha Lance Bottoms.

The 43rd annual Atlanta Jazz Festival is to be a two-day event over Labor Day weekend, on Sunday and Monday, Atlanta Mayor Keisha Lance Bottoms’ office said in a statement Friday. Fees may be charged for some events; no city funds have been tapped, as they were in prior years. 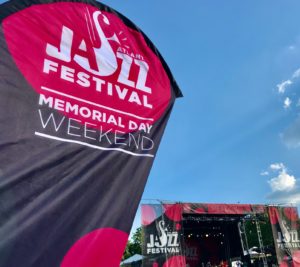 The Atlanta Jazz Festival traditionally was held in May and was rescheduled to the Labor Day weekend because of the pandemic. Credit: Kelly Jordan

The permit application for the event describes the event as four days over the holiday weekend. The mayor’s office said plans now call for a two-day event. Past festivals were a month-long celebration of jazz.

The Mayor’s Office of Cultural Affairs evidently expects big-name performers to be signed, along with sponsors to fund them. Two stages are planned, with a minimum of 20 acts, according to the permit application. 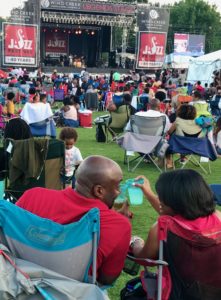 The Atlanta Jazz Festival has been one the city’s rites of passage from Spring leading to Summer. Credit: Kelly Jordan

The Atlanta City Council authorized the Mayor’s Office of Cultural Affairs to pay rates up to $10,000 for local performers from metro Atlanta; up to $65,000 for national performers; and up to $100,000 for headline performers. In addition, the city is to pay for instruments, equipment, staging, sound and lights. Out-of-town performers will have travel expenses covered by they city – round-trip airfare, hotel, meals and ground transportation costs.

The new dates over the Labor Day holiday for the Atlanta Jazz Festival don’t appear to have been widely broadcast. The new dates appear in a permit application moving through the city’s two Neighborhood Planning Units, NPU-E and NPU-F, that have an interest in the venue – Piedmont Park.

The festival is scheduled to begin Sunday, Sept. 5, and conclude on Labor Day Monday, Sept. 6, according to the statement from the mayor’s office. The event is to open at 7 a.m. each day, and conclude each day by 10 p.m. Another entry on the application shows the finish time is 11 p.m. 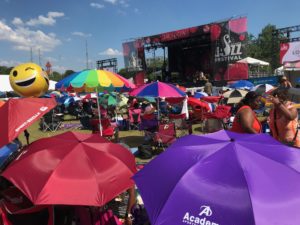 The mayor’s Office of Cultural Affairs had initially planned to host the event in May, the typical time frame.

That plan ran afoul in the Atlanta City Council’s Finance/Executive Committee, where members at the Feb. 10 meeting questioned the wisdom of hosting a major attraction during the COVID-19 pandemic. Committee Chairperson Jennifer Ide said the legislation proposed by the mayor’s office to enable the festival should be altered ensure the city isn’t liable for costs if the event had to be postponed due to COVID-19.

The committee altered the legislation to ensure any contracts the city enters won’t result in the city owing any money to performers or others if the festival has to be postponed.