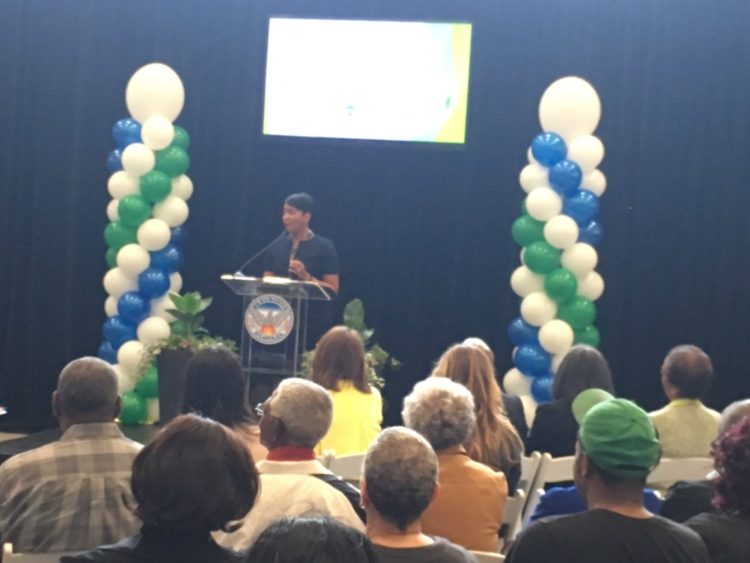 Atlanta Mayor Keisha Lance Bottoms spoke Monday to about 100 folks gathered to celebrate the solar installation that's to be completed this month at the C.T. Natatorium and Recreation Center. Credit: Maggie Lee

On Monday, Bottoms and about 100 other supporters gathered at the C.T. Martin Natatorium and Recreation Center to celebrate installation of energy efficiency upgrades at the facility renamed from the Adamsville Recreation Center to honor the former Atlanta City Councilmember.

The building is to be topped by solar panels by the end of the month, according to the city’s plan.

The two initiatives are part of the city’s Solarize Atlanta program, which is working on a fairly aggressive timeline to complete the current program.

Solarize Atlanta was launched April 12. Homeowners have until Aug. 31 to enroll in the program. Managers of commercial properties have an enrollment deadline of Oct. 31.

Creative Solar is part of what’s called a “plug and pay” program. The idea is to have a single contractor handle the installations because of advantages described as vetted contractors, vetted materials, predetermined pricing, and trusted solar evaluations – the process Seydel mentioned in his Facebook post. 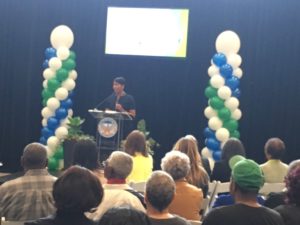 Atlanta Mayor Keisha Lance Bottoms spoke Monday to about 100 folks gathered to celebrate the solar installation that’s to be completed this month at the C.T. Natatorium and Recreation Center. Credit: Maggie Lee

Creative Solar was the installer for Solarize Decatur-DeKalb, and company founder and CEO Russell Seifert said the company is honored to be chosen as official residential installer for Atlanta.

“With our experience as a Solarize installer, the team at Creative Solar USA wants to help Atlanta residents get clean, cost-effective solar power at the best possible price,” Seifert said in a statement. “Bulk buying and other unique savings of Solarize not only can provide lower costs, but they help take the mystery and guesswork out of the solar installation process.”

The plan is for the solar panels to displace a significant portion of the energy used by the facilities. Cherry Street is to provide predictably price electricity to the city over the course of the agreement, according to statement released by Cherry Street.

Terms of the agreement call for Cherry Street Energy to pay for the installation of solar panels, to sell the power at competitive market rates, and provide power to the city at a fixed rate, per kilowatt, for 20 years.

The installation is to be complete by late August at the following locations: