Atlanta needs to stop closing its sidewalks to people 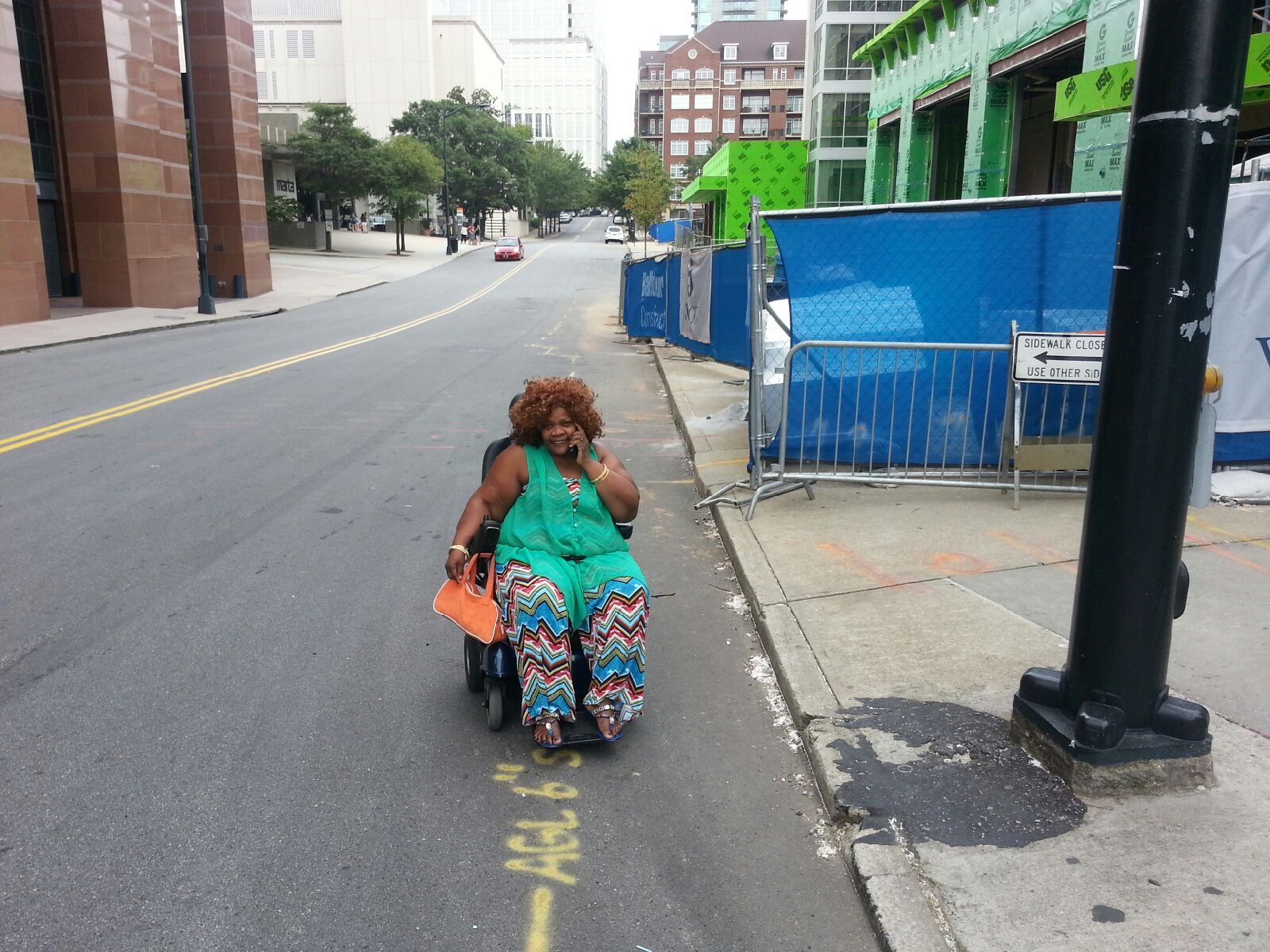 Apparently I’m not alone in my distaste for the proliferation of closed sidewalks in our city.

Dozens of people let me know they agreed with last week’s column complaining about the epidemic of closed sidewalks – especially during new construction.

The refrain was the same. We can, and should, do better if we want to really be a cosmopolitan city. That led to the next obvious question, what do we need to do to stop the out-of-control practice of closing sidewalks that could and should remain open.

Actually, the City of Atlanta’s “Pedestrian Right of Way Access Policy” says many of the right things. Permits to close sidewalks should be limited to 90 days “to insure that that extended sidewalk closure does not take place.” 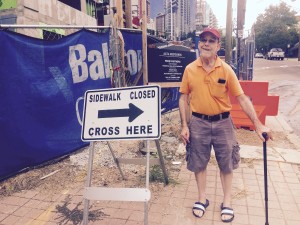 The policy specifies what developers must do to provide pedestrian access – including providing a “temporary covered, lighted walkway” that is ADA (American Disabilities Act) accessible.

It goes on to say that if a four-foot access cannot be achieved and if approved by City engineer; barricades, signage and ADA accessibility for pedestrian safety must be provided.”

But then the city gives developers an out.

“If a contractor cannot meet any of the above due to the structural necessities of the work to be completed, then pedestrian traffic can be directed to cross to the other side of the street.”

And that’s how the “exception” has become the rule.

One of SaportaReport’s readers did an inventory of an eight-block radius in Midtown. He counted 12 construction projects currently underway with a total of 25 blocks of sidewalks closed to pedestrians. Two additional blocks have scaffolding, but only one of those is fully ADA compliant.

For Bruce Rose, a Midtown resident who was born with cerebral palsy, the situation is out of control.

“As a person with an orthopedic disability, it’s frustrating and dangerous when they close a sidewalk on one side of the street,” Rose said in an interview over the weekend. “It’s nearly impossible for me to cross the street to get to the other side.” 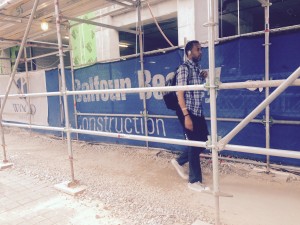 A developer actually has built a covered walkway for pedestrians, but gravel on the ground makes it inaccessible to people with disabilities

Rose moved to Midtown in 2010 because it was one of the most pedestrian-friendly areas in Atlanta. He lived above a grocery store, and diagonally across from a MARTA station.

“I really don’t think the City of Atlanta understands accessibility,” Rose said. “It is a safety issue, first and foremost. That is the point I hope you can drive home.”

When handing out permits to close sidewalks, city officials have assumed that it’s okay as long as there’s a sidewalk on the other side of the street.

But Sally Flocks, founder, president and CEO of PEDS – a pedestrian advocacy organization, said that people on foot prefer to take the shortest paths. 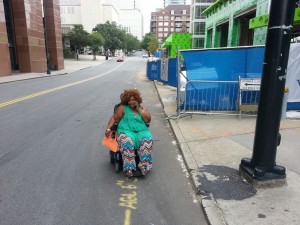 Flocks and several readers made two points repeatedly. If a developer absolutely needs every inch of their site plus the sidewalk, then many of Atlanta’s streets are so wide or have so many lanes that a pedestrian path with a barrier would not cause a hardship.

“If Midtown desires to be the great urban walkable part of Atlanta, it must tame its streets through road diets,” said Lee Pollock, a planner for Jacobs firm. “For me, the most glaring street is 11th and Crescent. Eleventh Street is massive, and the contractor has taken roughly one lane and a parallel parking space. Even with all of this pavement ‘taken’ there would be room for two lanes and parallel parking on both sides from my rough estimation.”

Another point that people made repeatedly is that other cities have figured out how to keep sidewalks open during construction.

Rose, 63, has lived in and traveled to major cities in the United States and around the world.

Earlier this summer, he traveled to Berlin, Germany. “They had construction all over,” Rose said. “There they are required to put up scaffolding. They do not close sidewalks in Berlin.”

The same is true in Washington, D.C., New York, Chicago, Detroit and just about every other major city in the country, Rose and other readers said.

Richard Mendoza, Atlanta’s commissioner of Public Works, said in a statement: “We make every effort to maintain sidewalk access unless there exists potential risks to public safety due to construction activity, in which case we require ADA compliant detours be provided by the developers.”

Rose, however, disputed that. When asked about the city being ADA accessible, Rose said: “That’s a real joke.”

As an example, all we had to do was go across the street from his high rise to see a covered pedestrian walkway filled with gravel – making it impossible to use for someone in a wheelchair or for Rose, who has trouble walking on uneven ground. 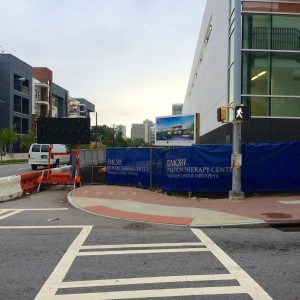 While the City of Atlanta has laws on the books, Flocks questioned whether they were being enforced. Does the city monitor when 90-day permits have expired? Is there any real enforcement of the rules? And have so many exceptions been given that there really is no appreciation to the stated city policy that sidewalks should remain open?

One blatant example is Emory’s Proton Therapy Center being built along Juniper Street between Ponce de Leon Avenue and North Avenue. Work has been stopped on that project because it has run out of funds, but the sidewalk remains closed. There is a large stretch of land where people could walk if the barrier were to be moved closer to the building. Again, no construction is taking place, but the sidewalk is still closed.

An easy way to fix that problem would be to charge developers a significant fee for every sidewalk that is closed. The longer a sidewalk was closed, the higher the fees would be. Developers then would be more motivated to keep sidewalks open or provide pedestrian access. 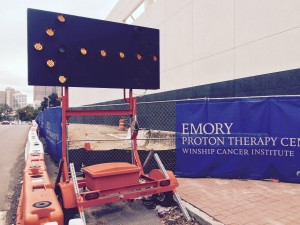 Construction work has stopped on Emory’s Proton Center, but the sidewalk remains closed despite ample space for pedestrians inside the barricades

Again, a base fee could be charged the first month, but that fee could double each month that sidewalks remain closed. If the base fee were $100 a day for regular streets and $200 a day for major streets (and those would double after 30 days), and if the city enforced that policy, then we would be able to make a difference.

“Any kind of disincentive to close sidewalks would be welcome, including financial disincentives,” Rose said. “I see people walking on Peachtree Place on the street all the time because the sidewalk is closed.”

As if on cue – right after our interview, a woman in a wheelchair rolled along the middle of Peachtree Place because the sidewalk was closed.

“You wouldn’t see that situation in Chicago, New York or Boston,” Rose said. “Why do we have all these exceptions? Why are we different? We pretend to be a big metropolitan city….”

Rose, who speaks with difficulty, didn’t need to finish his sentence.

We pretend to be a big city, but we still don’t act like one.