In the short term, Atlanta’s school superintendent said she plans to propose an arts school for the city — even as she and others also work on a reading campaign and closing achievement gaps among schools.

But asked about her longer-term counsel for the school system she’s set to leave next year, Meria Carstarphen suggested  patience, a longer budget horizon and making real-time changes on the ground when it’s best for the students.

It will be a multi-decade journey to put the school system back together, said Carstarphen on Thursday, just after finishing her annual “State of the District” event. 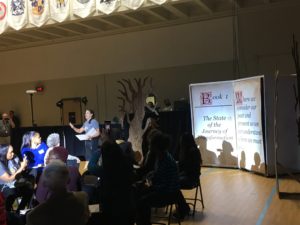 Atlanta School Superintendent Meria Carstarphen popped out of a giant book to start her State of the District event on Thursday. During the event, APS students debated, sang, performed slam poetry and more. Every adult found a child’s book in their seat, and read to the youngest students together. Credit: Maggie Lee

She joined APS in 2014, the same year a dozen educators were controversially put on trial, accused of helping students cheat on standardized tests in 2009.  A state investigation suggested 178 educators across 44 schools were involved in cheating.

“You have to have time and patience to get through the tough spots,” Carstarphen said.

Since then, graduation rates and test scores have, in places, gone up — though she acknowledges it’s still not enough in a lot of schools.

One thing Carstarphen often emphasizes is a system-wide embrace of “social emotional learning skills,” such as the ability to set goals, overcome obstacles and develop healthy relationships. A common tagline for Carstarphen: get students prepared for what will be a “choice-filled life,” starting with preparation to choose college, technical school, the military or a professional certification upon graduation.

But “patience” is not of much interest to parents who pay taxes, or have children in APS now and say that Atlanta’s schools amount to a “Tale of Two Cities.” That’s the phrase used by the the Latino Association for Parents of Public Schools and GeorgiaCAN, a nonprofit that advocates access to high-quality schools. The two released a statement after Carstarphen’s Thursday address. Some schools struggle while the best schools could take more students, according to these groups.

“The notion that the quality of your children’s school relies on the color of your skin or the neighborhood you can afford to live in is patently unfair,” said Ricardo Miguel Martinez, a LAPPS Board member.

Drilling down a bit more into policy ideas for the folks who will lead the system in the medium term, Carstarphen said that the system has considered putting in a multi-year approach to budgeting, but that that fell apart when Fulton County froze property taxes then went through “drama” with its property tax assessments and collections.

“We were on that path, so we have the structures available to do that,” Carstarphen said. 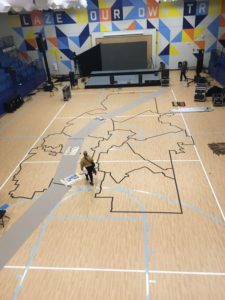 This year, Harper-Archer Elementary hosted the Atlanta Public Schools State of the District event. The school is a merger between Towns and Fain elementaries.  It’s in the onetime Harper High School building, which has just been renovated. Carstarphen has picked up some criticism for closing or consolidating some schools, even if the schools have few students. Credit: Maggie Lee

(Most of APS’ budget comes from property taxes, which Fulton County assesses, collects and forwards to the school system. But county assessment problems and piles of appeals have for three years made payments to the schools arrive later than APS would like.)

Another thing — she thinks it would be good in the coming years to delegate more decision-making down to the school level when possible, because every school is different. One school may have a large population of English-language learners, for example. Another might serve mostly students who come from families that have been stuck in poverty for generations.

“As you strengthen your talent, the principals and the teachers and the GO teams for Atlanta Public Schools, give them the autonomy and flexibility to make those decisions,” Carstarphen said. “They really do need to be able to direct time, people and money, the resources available to them for the children they serve.”

As for a fine arts school, it’s something that the system has been researching for a while now.

“This is one where I think we would have enough partners that would be excited about it and might even be able to help us get it off the ground before we figure out all the other bits and pieces within a bureaucratic system,” Carstarphen said.

She expects to bring a proposal for the APS board consideration by the end of the school year.

Carstarphen’s term is set to end in June, 2020. The board did not offer her a contract renewal past that time, and has gone ahead with a search for another superintendent, though some in the community are pushing for APS to offer Carstarphen an extension.