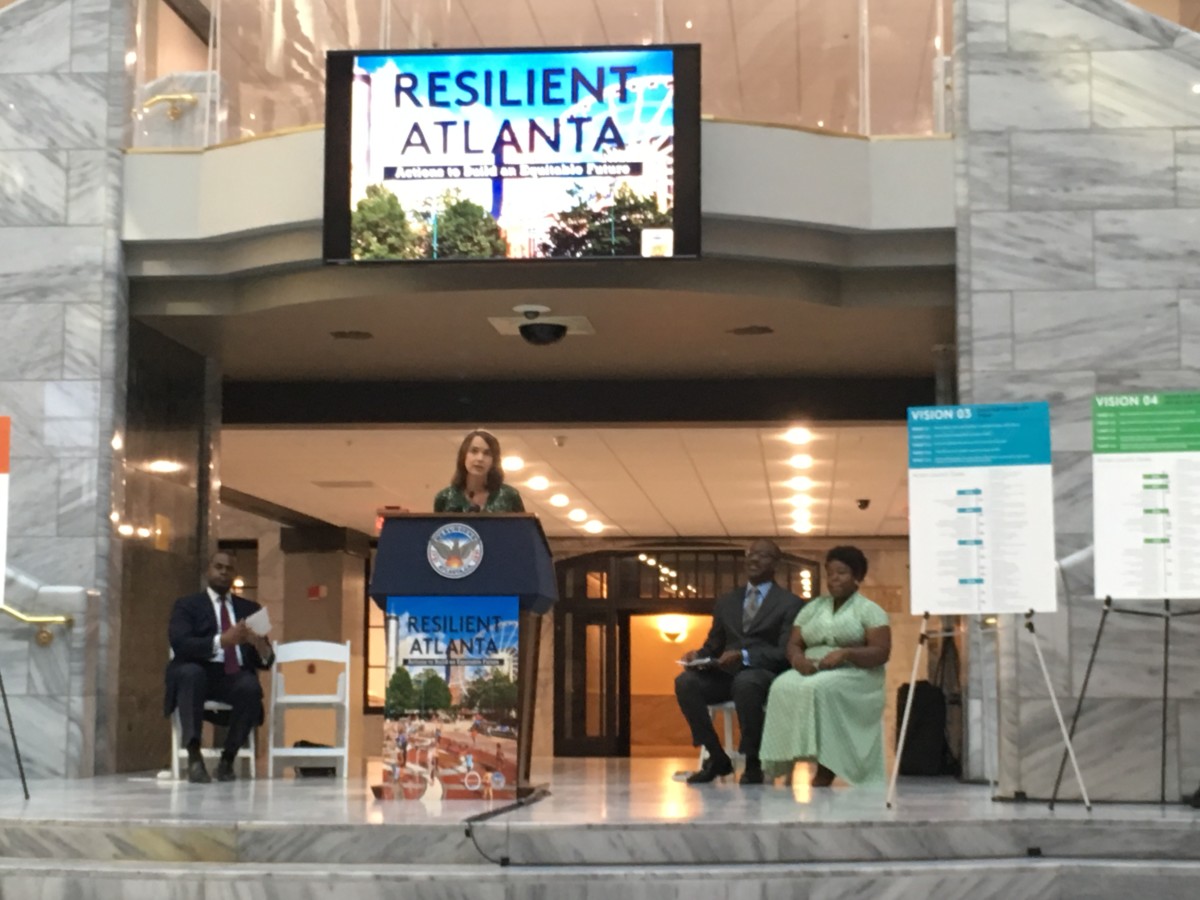 "I've been telling my team I can't wait for tomorrow, that's the most exciting part for me because that's when we're actually going to be implementing our strategy," said Atlanta Chief Resilience Officer Stephanie Stuckey on Thursday, at the ceremonial launch of the Atlanta Resilience Strategy. Credit: Maggie Lee

After more than a year of work, the city of Atlanta published a plan called Resilient Atlanta: Actions to Build a More Equitable Future. The 150-page document is meant as a blueprint for where Atlanta wants to go, and how it wants to handle problems from inequity to natural disasters.

The to-do list is long. “Become a national leader by 2022 in addressing structural racism, reconciling historic racism and promoting racial equity” is just the start of a list of targets. The city is also aiming to prepare children for kindergarten, get more folks participating in civic discussions, and improve access to affordable housing, to name just a few.

It lists dozens of interim, concrete steps that should be taken, like completing the first part of the Proctor Creek Greenway. 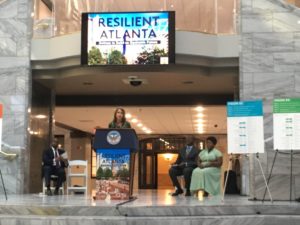 “I’ve been telling my team I can’t wait for tomorrow, that’s the most exciting part for me because that’s when we’re actually going to be implementing our strategy,” said Atlanta Chief Resilience Officer Stephanie Stuckey on Thursday, at the ceremonial launch of the Atlanta Resilience Strategy. Credit: Maggie Lee

“I believe that we have developed a strategy that is going to take Atlanta into the next 10, 20, 30 years and make us one of the leading cities in the world,” said Mayor Kasim Reed at a City Hall ceremony to mark publication of the plan.

The document is part of Atlanta’s membership in 100 Resilient Cities, an organization that helps cities around the world become more resilient to social, economic, and physical challenges that it says are a growing part of the 21st century. That could include natural disasters like major floods or heat waves, terrorist threats, and long-term stresses such as income inequality, lack of affordable housing, or the effects of climate crisis. The organization is financially supported by The Rockefeller Foundation.

For Atlanta, membership in 100RC means financing to employ a Chief Resilience Officer, access to expertise in making the plans and carrying them out, as well as tapping into a network of other cities.

Reed said he dialed into that network earlier this year when a portion of Interstate 85 collapsed. Reed said that very night, the city was on the phone with a person in New York City who handled traffic after 9/11, to give advice on how to handle the traffic challenge.

“What it does is it places you in the network, and allows your phone call to be answered anywhere in the world,” Reed said.

Atlanta Chief Resilience Officer Stephanie Stuckey said the city engaged some 7,000 stakeholders to draw up the plan. But she said it also draws on the Atlanta City Design Project and the green infrastructure master strategic plan.

“I’ve been telling my team I can’t wait for tomorrow, that’s the most exciting part for me because that’s when we’re actually going to be implementing our strategy,” she said.

Abiodun Henderson said she thinks the plan could help social enterprises like hers — she’s founder of Ganstas to Growers. She teaches formerly incarcerated individuals how to farm. But small enterprises like hers lack the capacity of bigger ones that have cash to hire accountants or staff to do things like apply for grants. She said the plan could mean funding or technical support for organizations like hers.

“We’ve been underfunded, under-resourced, really using people power to help empower our communities. But we’re not able to develop the infrastructure and do what we really  need to do to make to make a large impact because we’re under resources,” Henderson said, speaking after the ceremony.

The plan itself is fluid and is to be updated every four years, supplemented by report cards assessing progress.