Despite the COVID-19 pandemic, progress is being made to brand Atlanta as a “city of peace.” 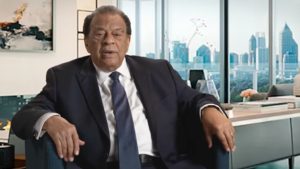 Key local leaders are raising money and working plans to host the 2021 World Summit of Nobel Peace Laureates, but that’s just the initial part of their vision.

“We realized it made sense to expand the ecosystem of peace beyond the summit,” said Bob Hope, a public relations executive who is CEO of Atlanta Peace Inc.

The ecosystem – with an estimated $10 million budget – includes:

The Atlanta Peace Initiative has just unveiled its new website as well as a new video that outlines the next steps to realize the vision for making Atlanta a City of Peace.

Hope said all the different elements would complement each other. For example, the Peace University could hold conferences on the years that Atlanta would not be hosting the Summit. 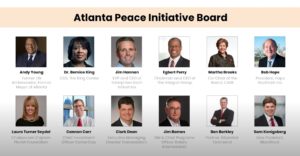 The board of the Atlanta Peace Initiative

Three Atlanta executives are leading the business community’s efforts to create an ecosystem of peace: Jim Hannan, an executive with Koch Industries, which owns Georgia Pacific; Egbert Perry, CEO of the Integral Group; and Martha Brooks, co-chair of CARE’s board.

Although this is an effort being promoted by Atlanta leaders, they have a powerful international partner in addition to the Nobel organization – Rotary International – a leading global association that has peace as part of its mission.

The budget for the Atlanta Peace Ecosystem includes raising $4.5 million to host the October 2021 World Summit of Nobel Peace Laureates, a four-day event that invites all Nobel Peace prize winners to the summit. 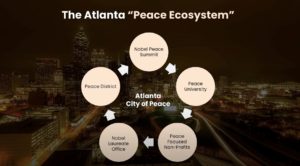 “We have a history and heritage of peace that some of us have decided that we should institutionalize it,” Young said in the video. “We should brand Atlanta not only as a civil rights city, an international city, a city too busy to hate. But Atlanta should be a city of peace that brings the world together.”