Atlanta region planning a network of bicycle and walking trails, paths and lanes

For decades, bicycle lanes, multi-use trails and paths have been developed all over the Atlanta region.

The closest the region has had to a master developer of multi-use trails is the PATH Foundation, which has developed the Silver Comet Trail, Arabia Mountain Trail and segments of the Atlanta BeltLine to name a few.

Now the Atlanta Regional Commission is working on a comprehensive Bicycle and Walking Plan for the region that start trying to knit the various trails, paths and lanes together. 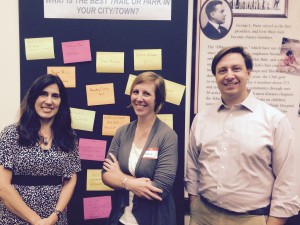 The ultimate goal is to make the greater Atlanta region – the 19 counties that make up the metropolitan planning organization – a friendlier place for people to ride their bicycles and to use their feet to get around.

In a bid for national experts, the ARC awarded a $200,000 contract to Portland, Or.-based Alta Planning & Design to help the organization develop a regional bicycle and walking plan. The firm was selected because of its experience in both planning and implementation of bicycle and walking trails, ARC officials said.

A workshop to launch the planning effort was held May 29 at the R. Charles Loudermilk Center where dozens of people interested in bicycling and walking in the region came to offer their ideas on how the plan should come together.

“We are all pedestrians,” began Mia Birk, Alta’s founder. She then described the opportunities for cyclists. About one-third of the population could be described as “No bikes. No way.” There is nothing that could be done to convince them to get on a bicycle. 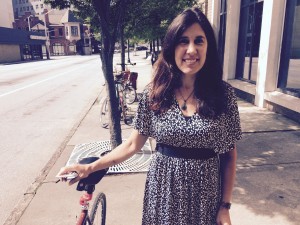 Mia Birk of Alta next to bicycles parked on sidewalk (Photo: Maria Saporta)

And there’s about 1 percent of the population that is “strong and fearless” – nothing will stop them from riding. They will ride anywhere, anytime. About 7 percent are enthusiastic and confident – riding where there are amenities such as bike lanes.

And then about 60 percent of the population are “Interested by concerned.” Those are the people who could be convinced to ride their bicycles if there were more trails and lanes, better safety measures, accessible bicycle parking, and more bicycle-friendly amenities – such as showers at work.

When it comes to national rankings, Atlanta usually falls in the middle when listed as a bicycle-friendly or a walk-friendly city.

“I think you are raising your game,” said Birk, adding that the plan will focus on the needs of the region and analyze the building blocks that are needed to create a more comprehensive network of paths and trails.

Byron Rushing, ARC’s bicycle and pedestrian planner who is the organization’s project manager for the plan, said the team is now working on its technical analysis for a regional trail network. It will look to see where existing trails exist, and it will focus on the gaps that exists. 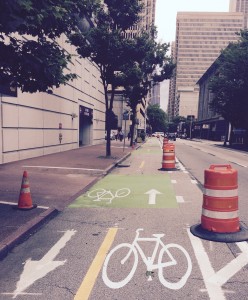 Rushing said that he believes those gaps probably total to several dozen miles rather than hundreds of miles. But it will take until the end of summer before that the team will be able to present draft recommendations. The hope is to have a final plan presented to the ARC board at the December meeting.

“Our challenge is how we talk about bicycling, walking trails, access to transit, safety and economic development when we talk about these two modes of transportation,” Rushing said. “They really are very different.”

The exercise becomes even more complex when it is extended over 19 counties – with a few that are urban, others suburban and others that are exurban.

One way to address the challenge throughout the 19 counties is through the Livable Communities Initiative (LCI). By having particular nodes – town centers – then it is easier to develop trails and paths connecting those nodes while also providing walking and cycling within those livable centers.

“We would love for our eventual outcome to be a connected regional network of trails, sidewalks, bike lanes and transit,” Rushing said. “But we recognize that each piece is important for each community.”

Brad Davis, the Atlanta project manager for Alta Planning and Design, said the challenge is not insurmountable.

“We are really close to having some great connections that would allow us to extend to the east, west, south and north,” Davis said. 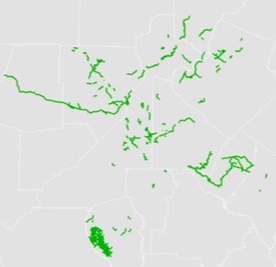 For years, the PATH Foundation has been working on a way to connect its eastside trails going to Stone Mountain to the Silver Comet Trail going to Alabama. The missing piece has been having a path or a trail through downtown Atlanta.

Meanwhile, Atlanta has been busy building trails along the Atlanta BeltLine as well as new bicycle tracks along the city’s streets – including Ponce de Leon and now Peachtree Center Boulevard.

Step by step, community by community, city by city, and county by county, we may soon be able to weave our region together in a way that it’s never been tied before – through a tightly-knit fabric of paths, trails and sidewalks – giving people an alternative to the car as a way to get around.

Now if we could only add true regional transit to that mix, we really would be getting somewhere. 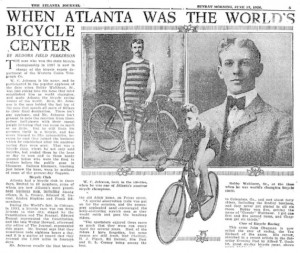 A newspaper headline from the 1920s: “When Atlanta Was the World’s Bicycle Center” 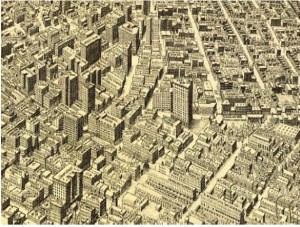 An aerial view of how downtown Atlanta used to look before the age of the automobile (Source: presentation of the Atlanta Regional Commission)

Previous Article
Care for a yak filet? Try KSU dining hall, part of school’s sustainable culinary program
Next Article
Despite the distinction, we’re pretty sure his mother wouldn’t be proud