It’s a movement that’s finally beginning to take hold in Atlanta — turning city streets over to people rather than cars.

On Sunday, Atlanta Streets Alive created a car-free five-mile route that created a loop along the Northeast BeltLine stretch to North Highland to Virginia Avenue to where it crossed with the BeltLine.

Although it is too early to get an official headcount, it is thought that at least 20,000 Atlantans participated in Sunday’s Atlanta Streets Alive event. 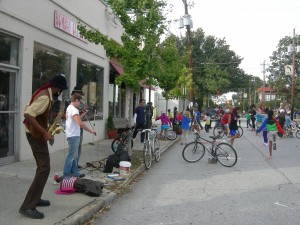 A wonderful cross-section of people were drawn to event — bringing a flamboyant flavor to Atlanta’s intown streets. People adorned colorful and extraordinary outfits and some pushing their pets in strollers or wagons as hundreds of children and families rode their bicycles or strolled along the entire route — feeling the freedom of being able to walk in the middle of the street. 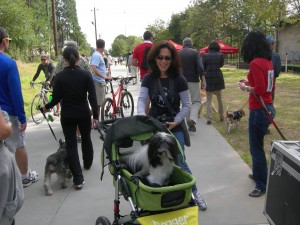 A dog rides in style during Atlanta Streets Alive

The “Ciclovia” movement actually can trace its origins in Bogota, Colombia, which began closing off streets every Sunday in 1976. Today, more than 70 miles of streets in Bogota are closed on every Sunday and 1.5 million people (20 percednt of the city’s population) take over the streets riding bicycles, strolling, walking running, skateboarding…. You get the idea.

In the mid-1980s, the “Ciclovia” movement began spreading to North America, where now about 30 cities have closed off their streets to cars and opened them up to people on select Sundays of the year. 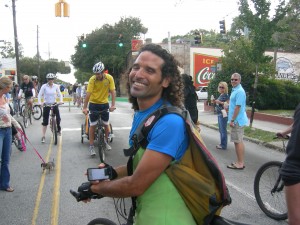 The Atlanta Bicycle Coalition’s executive director, Rebecca Serna, decided to bring the concept to Atlanta in 2010 starting out with a just a two-mile stretch. In all, there have been four Atlanta Streets Alive — one in the Spring and one in the Fall — and it has gradually expanded its coverage as more people have discovered the pleasure of taking to the streets without a motorized vehicle. 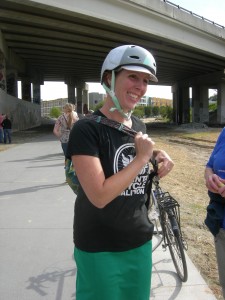 Rebecca Serna along the BeltLine

Walking the entire route on Sunday, the theme that kept surfacing was community. It was hard to walk several feet without seeing friends and acquaintances — stopping to chat or give hugs or just simply waving hello. 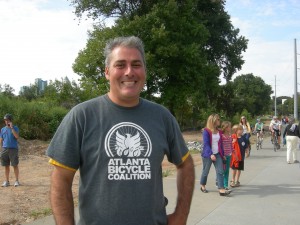 It could not have been a more beautiful day — with the chill of an early fall. For many, it was their first encounter with the Atlanta BeltLine’s new concrete pathway along the Northeast quadrant. A common refrain was how different Atlanta looked from the perspective of the old railroad corridor. 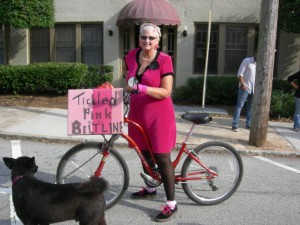 Rider is “tickled pink” about the BeltLine

It was along the BeltLine where we ran into Rebecca Serna, who was beaming with the success of Sunday’s event.

As we ended our five-mile walk, we couldn’t help thinking — this should take place every Sunday.

Well as a city, we’re probably just not there yet.

But it does feel as though we are on our way.

The next Atlanta Streets Alive is planned to take place in the Spring along Peachtree Street in Midtown. 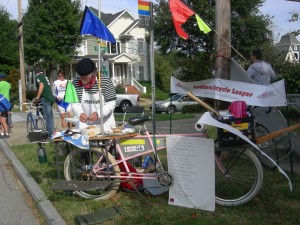 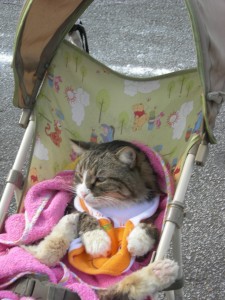 Dolled up cat enjoys the attention 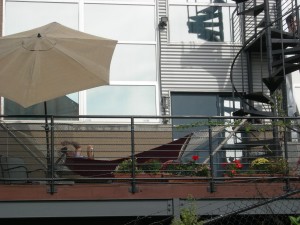 A BeltLine neighbor enjoys the day while laying on a hammock