The Alliance for Biking and Walking ranks how the nation’s major 52 cities and the 50 states compare when it comes to having bicycle-friendly streets and pedestrian-friendly amenities.

Although Atlanta tends to rank better than the state of Georgia, both definitely have lots of room to improve their offerings by providing different modes of transportation other than just the automobile.

One way to change the mindset of a city is Atlanta Streets Alive – a celebratory festival held in different parts of the city every few months or so whereby the Atlanta Bicycle Coalition  and the City of Atlanta close several major streets in a community and turn them over to the people. 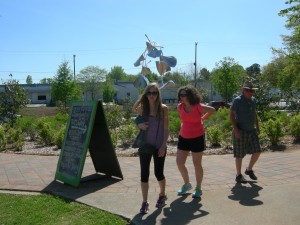 On Sunday, the designated community was West End — the first Streets Alive to be held in that part of town.

The event did not disappoint. West End, one of the more historic neighborhoods in Atlanta, provided a wonderful backdrop for Atlanta Streets Alive, which traveled along the Atlanta BeltLine to the south, Ralph David Abernathy to the north and Murphy Street to the east — for a route encompassing 2.7 miles and passing right by the West End MARTA station.

In addition to the weather, Sunday’s Atlanta Streets Alive was special in several other ways including having some of the best people watching anywhere. The attendees included everyone from toddlers on bicycles to senior citizens who were walking slowly with some aid from their family and friends. 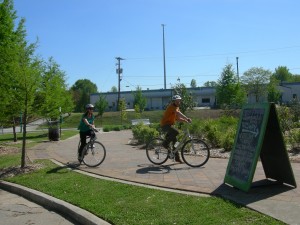 At BeltLine in West End

One couldn’t help but be struck by the diversity of the people who showed up for Sunday’s Atlanta Streets Alive in what would generally be considered to be an African-American community.

Something happens to people when they are stripped of their cars and are free to take over the streets with their feet. They smile, and then they smile some more.

A policeman was watching it all at the intersection of Peeples Street and Ralph David Abernathy. Was he having a good time? “Oh yes,” he answered. “It sure beats what I usually have to do when I’m working.”

The benchmarking report by the Alliance for Biking and Walking states that the “Open Streets” movement is catching on across the United States. It’s one of the ways to educate the public about the multiple advantages of  walking, biking and connecting to transit. 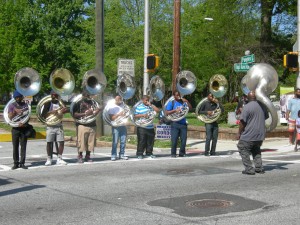 The report, which was funded by the Atlanta-based Centers for Disease Control and Prevention, also received support from AARP (the American Association of Retired Persons) and the American Public Transportation Association.

“The Alliance for Biking & Walking has partnered with the CDC for this project in an effort to highlight the connection between the healthy lifestyles and bicycling and walking,” according to the benchmarking study. “This report includes data on physical activity, obesity and overweight trends, high blood pressure rates, and diabetes to illustrate the connection between bicycling and walking levels and these health indicators.”

According to the report, when it comes to commuting by bicycle or walking, Georgia ranks 48th among the 50 states.

But when it comes to per-capita spending on bicycle  and pedestrian projects, Georgia ranks 18th. 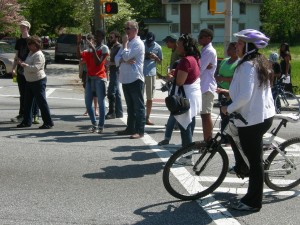 Audience looks on, including Paul Morris, CEO of the BeltLine

The good news is that more Georgians appear to be promoting the use of  cycling and walking. The state ranks 28th in getting the recommended physical activity.

Among the 52 largest cities in the United States, the City of Atlanta ranks 17th in the percent of commuters who cycle or walk to work. 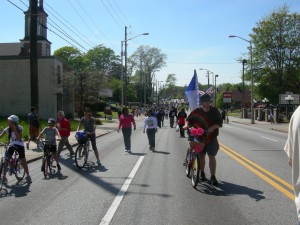 People dress up their bicycles for the event

Still the number of fatalities remains relatively high, with Atlanta’s rank at 27th. When  it comes to getting the recommended physical activity, Atlanta ranks 25th.

Of the share of commuters who walk or ride a bike to work, Atlanta ranks close to the national median with 4.6 percent who walk and 1.1 percent ride a bicycle.

On a statewide level, only 0.2 percent of Georgians commute to work by bicycle, giving the state a rank of 43.

When it comes to walking to work, Georgia’s rank was 48th with a level of 1.6 percent.

Those numbers did improve when the benchmarking focused on cities.

Atlanta ranked 18th of 52 cities of percent of people who commute by bicycle – 1.1 percent.

And 4.5 percent of Atlantans walk to work, giving the city a rank of 14th among the 52 largest cities in the country. 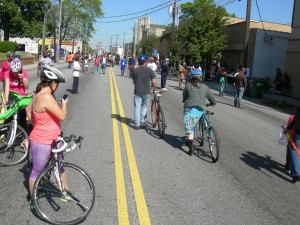 The report also studied now much cities and states had invested in bicycle infrastructure. Again, Atlanta and Georgia had plenty of room for improvement.

Atlanta had less than an average of 1 mile of facilities per square mile.

The Alliance, however, did credit the “Open Streets” initiative for helping to change the tide of public opinion. A few cities — including Seattle, San Francisco, and New York City— have had regularly-occurring car-free streets within parks for decade. 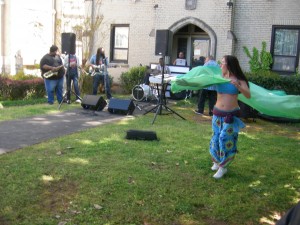 A  new program has been spreading across North American in the last decade called “Open Streets. Cars are temporarily removed from the streets so that people may use them “for healthy and fun physical activities like walking, jogging, bicycling, and dancing.”

All were in full force on Sunday.

The Alliance also credited the nonprofit Georgia Bikes  for building a “comprehensive network of savvy local advocates and riders who have accumulated an impressive number of statewide legislative and policy wins.” 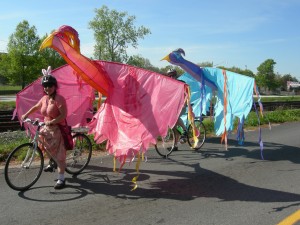 Two of the most decorative bicycles ever seen

The report said that Georgia Bikes’ first victory came shortly after its founding in 2003 when it created the “Share the Road” license plates. Revenue from the plates fed a fund for bicycle safety education and outreach, enabling the group to hire an executive director 2009.

“Laying a grassroots foundation proved to be hugely important,” the report sated. “In 2011, Georgia Bikes championed a bundle of pro-bicycling legislation, including a 3-foot passing law. Every state representative and senator heard from at least one constituent in favor of the legislation, allowing the bill to pass both chambers seamlessly and earn a quick signature from the governor.  Since then, Georgia Bikes has been on a roll, racking up policy wins in both proactive and defensive battles.” 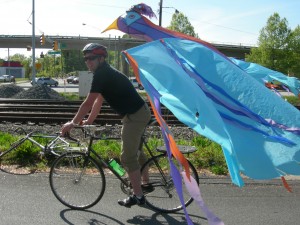 The organization faced a major legislative challenge when State Senator Butch Miller introduced a single-file bill that would have made it illegal for bicyclists to ride two abreast.

Georgia Bikes responded immediately. The group lined up parents and bike shop owners to testify against the bill in committee, while also engaging with Miller’s staff behind the scenes.

In short order, the bill was dropped, and Senator Miller agreed to work with the advocates to craft a state Complete Streets policy.

In response to the surge of public support and Senator Miller’s stated intentions, Georgia Department of Transportation (GDOT) decided to take a proactive approach towards Complete Streets. Advocates worked with the agency to create GDOT’s own Complete Streets policy, earning Georgia Bikes the Alliance’s 2012 Campaign of the Year award. GDOT has since worked with advocates to address Complete Streets implementation on routine resurfacing projects.

“Georgia Bikes’ most public accomplishment lay in exhibiting leadership during an unexpected statewide surge of outrage about an anti-bicycling bill,” the report stated. “The legislation, introduced in 2013, would have instituted bicycle registration and would have banned bicycling from some roads. During the outcry, Georgia Bikes positioned itself
as the expert entity fighting for bicyclists’ rights. Legislators facing angry calls from constituents quickly realized that they had kicked a hornets’ nest, and Georgia Bikes tripled their membership and racked up hundreds of new social media followers.”