Those three simple words now convey so much more. People all around the world have adopted that slogan as a sign of solidarity for freedom of speech, freedom of expression and freedom of press.

The “Je suis Charlie” slogan has gone viral on social media – prompting outpouring of support across the world following Wednesday’s massacre of 12 people (10 of them journalists) at the offices of Charlie Hebdo, a weekly newspaper outside Paris. 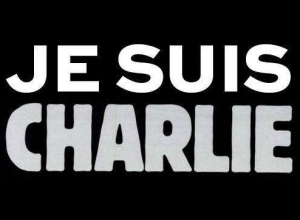 The newspaper had run cartoons that had caricatured the Prophet Muhammad, and its editors had been threatened before. The newspaper, which also satirized other religions and political figures, had been firebombed in 2011.

But Wednesday’s attack outside of Paris has been called a massacre as masked gunmen entered the newspaper’s office – shooting the 10 journalists, including the editor, and two security guards – shouting “Allah is the greatest” before fleeing the scene.

Almost instantaneously, crowds of people supporting the newspaper and its rights of freedom of press gathered in the streets of Paris and in other major cities around the world – giving voice to the “Je suis Charlie” (translated to “I am Charlie”) movement.

Heléne Couralt-Touré, executive director of the Alliance Francaise, sent out an email board members, staff and teachers of the French school.

“This has been a sad week for France, a sad week for freedom of speech and a sad week for Democracy,” she wrote. “We stand with our global community, colleagues and artists in fighting for the values we share. We will always be at the forefront of the battle for tolerance and creative freedom.”

In full disclosure, I serve on the board of the Alliance Francaise as a co-vice president, and I wholeheartedly endorse Heléne’s statement.

So let us all get the word out to our friends and colleagues through our many channels of social media and old-time communications to show that “We are Charlie.”

Atlanta is a city where these issues hit home. We proudly carry the banner of being the cradle of the Civil Rights movement, of being a nurturing city for human rights.

And consider the timing of these events. This week we will be honoring the teachings of Atlanta’s spiritual father– Martin Luther King Jr.

The King Center is holding a series of events (see below) to keep reminding us of the all-important lessons of non-violence, tolerance, freedom of expression and love – to love everyone – even those filled with hate.

Whether it be the showing of “The Interview” or the printing of cartoons of our political, religious or business leaders, or whether it be journalists writing on websites, newspapers or appearing on radio or television – and whether we like what we see, hear or read – we must always appreciate and stand up for our rights – and other people’s rights – to express ourselves and themselves.

We will walk in silence on Sunday for our freedom to express ourselves every other day of the year.

The King Center has planned a number of events and activities to celebrate the 2015 MLK Holiday. This will be the 29th Holiday Celebration commemorating Dr. King 86th birthday. All events are open to the public. Details of activities are subject to change.

What:  A Beloved Community Talk

The Race Factor: The Truth, The Lies and The Myths

What: Discussion and Book Signing

Leading with Courage: The “Friendship 9” and “Radical King”

Where: The King Center

Dr. Bernice A. King and other extended King family members.

What: Choose Nonviolence! No Other Way! Students with King

Interactive Dialogue between Students and King Family Members, as well as those who knew and worked with Dr. and Mrs. King. Moderated by various media personalities.

What: Birthday Celebration and Party

What: Millennials Leading with Courage

Corner of Auburn Avenue and Boulevard.

Special Greetings, Mathilde Mukantabana, Ambassador of the Republic of Rwanda to U.S.