Editor’s note: This story has been updated to reflect a policy Atlanta intends to implement to provide for public input on proposed fare increases.

Atlanta on Wednesday is slated to enter the final phase of approving a rate structure for the Atlanta Streetcar, the same day the last of four streetcars is due to arrive. 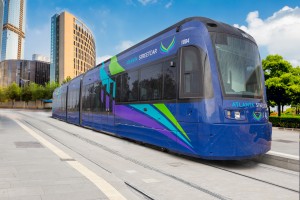 The last of Atlanta’s four streetcars are due to be delivered Wednesday. This image shows an actual streetcar against a fictional background. Credit: Atlanta Streetcar

If all goes as planned, base fares will be set at $1 a trip, $3 a day, $10 for five days, $11 for seven days, and $40 for 30 days, according to a presentation to be presented to the Finance Committee of the Atlanta City Council. Fares can be paid with MARTA Breeze cards, according to related legislation, and service is to be free for about 90 days.

The pending legislation provides Atlanta with the authority to double the proposed $1 cost of a one-way ticket on the Atlanta Streetcar without public notice if the city determines it needs more money to operate the system. However, the city does have a policy regarding public input.

The legislation grants Atlanta’s Department of Public Works the authority to raise the rates by up to $1. The legislation does not specify which of the rate tiers are affected. The tiers cited in the legislation range from the $1 singe-trip through the $40 monthly rate.

The public review of the initial fare structure is to begin at 1 p.m. with a public hearing at Atlanta City Hall. The council is slated to adopt a rate structure July 21. Public comments will be accepted until July 15. 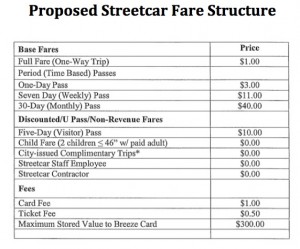 Click on the image to see a larger version. Credit: Atlanta City Council

The rate was devised after reviewing fares charged by streetcar programs elsewhere in the country. Here are the one-way rates charged in the six cities cited in the presentation:

At this point, there are no surprises in the proposed fare structure.

Rates have been in the development process since September 2012. Public comments have been sought and the first draft of the fare structure was unveiled in June 2013, according to the presentation.

Rates were based on three key premises, according to the report: 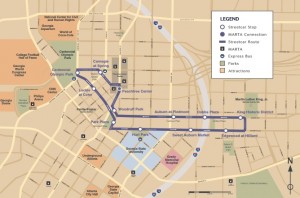 According to the fare policy, the policy’s goal is to:

Atlanta officials have strived to maintain public interest in a transportation project that is running behind schedule. Delays were attributed to a myriad of causes, such as unforeseen obstacles beneath city streets where tracks were to be laid.

The next major event is the Run the Rails 5K that follows the streetcar route. The event is sponsored by Siemens, the company that built the Atlanta streetcars, in conjunction with streetcar partners including Central Atlanta Progress, the Atlanta Downtown Improvement District, and the city of Atlanta.

The Atlanta streetcar is being built with $47.6 million in federal funding provided through the TIGER II program, an acronym for Transportation Investment Generating Economic Recovery.