The City of Atlanta is literally at a crossroads over how it will grow.

There’s little debate about Atlanta adding hundreds of thousands of new residents to the city in the next 30 years – with some estimates as high as 700,000 (currently the population is about 500,000).

But there’s little consensus on how we’ll be able to fit all those people without destroying the qualities that make Atlanta special ­– specifically its beautiful tree canopy.

A battle has been raging over amendments to the current zoning ordinance that would allow for a greater variety of housing choices – such as accessory dwelling units (think garage apartments or in-law suites) – that would help bring more affordable housing choices in certain residential areas of our city. 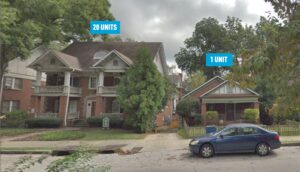 But leaders in several of Atlanta’s most tree-covered neighborhoods have expressed great concern that the proposed zoning amendments would make it easier for developers to clear cut land to maximize the number of units on a piece of property.

The whole discussion has been framed as mutually exclusive options: We can either have density with affordable housing or we can protect our tree canopy, but that we can’t do all three.

If Atlanta is going to be a world-class city, it must do all three – increase density, protect its tree canopy, and provide more affordable housing.

The Atlanta Regional Housing Forum  on Aug. 4 tackled the topic of more housing choices and how that can provide more affordable housing. A presentation by urbanists Eric Kronburg and Elizabeth Ward made the case for the new zoning ordinance that would allow greater density throughout the city. 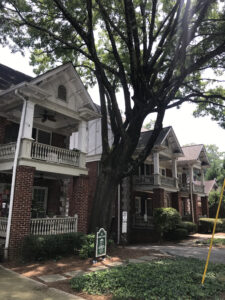 But we must look at this issue from not just two dimensions (density and affordability), but with the third dimension to retain our high quality of life – which includes Atlanta’s reputation as a city in a forest.

The city has been working to rewrite its tree protection ordinance, and it has gotten bogged down in a tug of war between developers, the city’s planning department and citizens.

Ironically, developers have yet to realize the value that trees bring to whatever land they seek to redevelop. As a result, Atlanta had a record for tree removals in 2019; and that record was surpassed in 2020. That kind of tree removal has made Atlanta the third worse city in the United States in terms of a rise in temperature.

A strong new tree ordinance is essential to stop this madness. We can’t be a healthy, thriving city if we’re cutting down our greatest asset – our trees.

While the proposed new zoning amendments are focused on increasing density, they doesn’t address the issue of trees and green space. There is discussion of rewriting our zoning ordinance. Ideally, we would link a new zoning ordinance with tree protection tools to create a more affordable, green city that would preserve our neighborhoods.

The Atlanta City Design, a conceptual framework adopted in 2017 to help guide Atlanta’s growth, outlined a way we could have it all. We could increase density along our most developed corridors, thereby encouraging greater mobility through increased transit, more sidewalks and bicycle lanes. 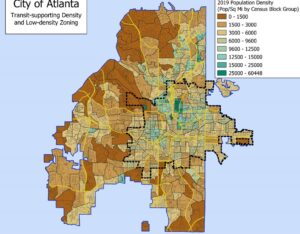 And we also would have “conservation areas” to protect the lush, green character of our city by preserving our neighborhoods. There likely would be increased density in our conservation areas as long as it happened “under the tree line,” according to urban designer Elizabeth Ward, who also serves on the Atlanta Tree Conservation Commission.

But the proposed zoning amendments do not include the protection of trees as a stipulation. At some point, the city should link a new tree protection ordinance with a new zoning ordinance.

Imagine if we provided incentives for people to do what’s right. Homeowners and developers would be able to add more density to their property only if they protected the high priority trees and respected the existing tree canopy.

Right now, the City of Atlanta seems to be letting developers cut down trees to replace houses with even bigger single-family homes, so no one wins. We aren’t adding density. We aren’t adding affordable housing options. And we’re not saving trees.

In short, as it now stands, we are doing everything ass backwards. 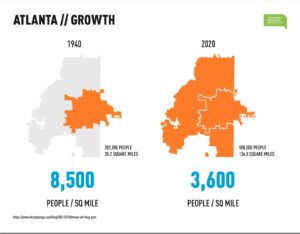 We need to be adding greater density. We need to be offering more affordable housing. We need to protect our trees. And no matter what, we need to replace and replant whatever trees we are losing every day.

“I regret that so often the conversation is framed as trees versus housing, or trees versus development. It should not be an either/or conversation,” Ward wrote in an email. “I want to live in a city that has both! I think there is more common ground among the housing advocates and tree advocates than is known, but that it will take people coming out of their silos and being willing to have conversations about priorities and trade-offs. It will take creativity and a willingness to work together to become a city that respects both the built and natural environment – and most importantly – the people that call this environment home. Cities are, after all, a habitat for people.”

Atlanta, we can do this. We can balance increasing our density, adding more affordable housing options, and saving our tree canopy. Let’s settle for nothing less.

Definition of Conservation Areas that was included in Atlanta City Design