Atlanta Diaper Bank a fresh resource for a hidden need 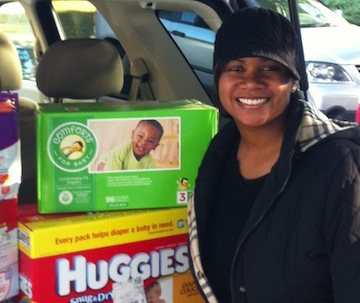 Adrienne Hopkins, founder of the Diaper Bank of Greater Atlanta. 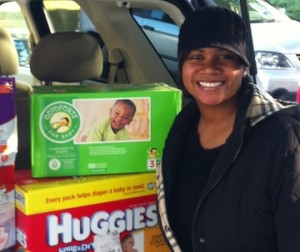 Adrienne Hopkins, founder of the Diaper Bank of Greater Atlanta.

Behind Atlanta’s hunger, poverty and homelessness are parents who are trying to stretch every resource—even dirty diapers. To cut the cost of this basic need, their babies wear soiled diapers for longer periods than they should, and sometimes parents try to wash or reuse disposable ones, putting the kids at risk for staph infections. Children in discomfort may cry more, raising the risk of becoming victims of abuse in households already under the stress of poverty.

Adrienne Hopkins of Kennesaw was transformed when she learned about this in late 2010 by watching a public service advertisement by a diaper manufacturer. It claimed that one out of three families was unable to provide enough diapers for their children. The ad was followed by a Discovery Network reality show featuring a young couple, who were homeless and living in the Pisgah National Forest in North Carolina. The wife was nine months pregnant; her husband’s employer had gone bankrupt.

Hopkins, who was a stay-at-home mom at the time, was shocked and moved.

“It was at that point I was thinking, ‘We really do live one time and what am I going to do with this one time?’” Hopkins said. “’And when I leave this earth what will I have done to make a difference?’”

Today, her Diaper Bank of Greater Atlanta is winding up its annual “Twelve Days of Diapers” drive that began Dec. 1. The Diaper Bank is a nonprofit that helps cover the bottoms of babies and toddlers as well as adults who require disposable undergarments but cannot afford them. Its current goal is collecting 100,000 diapers and adult incontinence products before Thursday.

Huggies, Pampers, Depends, or generics—there is an ongoing need in the metro area for this basic product.

“As a mother of two small children I know just how expensive diapers can be,” Hopkins said. “I understand what it feels like when money’s tight and you’re making a choice between food and diapers and you begin to ask yourself, ‘Can I stretch them out a bit?’” 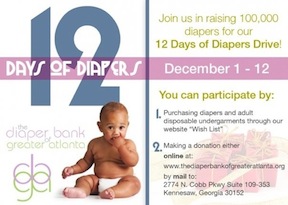 The drive for 100,000 diapers ends Thursday, but the need is ongoing.

The cost of diapers, as any new parent knows, is high. A baby will use about 2,500 diapers in the first year of life, according to the website whattoexpect.com. Sometimes that means eight to 10 diapers a day, costing up to $100 a month.

For families living on public assistance, such as the Special Supplemental Nutrition Program for Women, Infants and Children (WIC), diapers aren’t covered.

Likewise, adult undergarments such as Depends aren’t covered by Medicare—unless a patient is in hospice care.

After Hopkins saw the TV coverage in late 2010, her online search led to diaper banks in Detroit and New Haven, Conn. She found nothing similar in metro Atlanta.

She recalled telling her mother, “We got to move now or we’ll never do it.”

With help from her mother, Carol Hill, and her husband, Ronald Hopkins III, Hopkins worked to secure incorporation for the Diaper Bank in March 2011. It was granted 501c3 status in October 2011.

Since then, with the help of 16 social service agencies and partners such as Wells Fargo (which made two $1,000 donations on its day of giving this fall), DBGA has distributed 150,000 diapers.

The food bank’s website cited a figure from the the National Center on Children in Poverty: three million American children under three years of age live in poverty, most of whom wear diapers.  At a rate of six diapers per day, diaper-wearing children in poverty in the U.S. need over 6.7 billion diapers a year to stay dry and healthy.

The food bank distributes diapers through 600 partner agencies throughout 29 counties in metro Atlanta and north Georgia.

“Diapers are one of the most basic needs that the working poor struggle to provide their families,” Bill Bolling, executive director, said in a food bank website story.  “As the number of Georgians living in poverty continues to rise, it’s only natural that we join this national initiative to provide a basic necessity for those in need.” 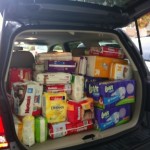 A deposit to the Diaper Bank of Greater Atlanta.

Diapers are something that a lot of parents take for granted. Diaper banks are kind of thankless too. Hopkins said the work is hard and it takes up a great deal of time, and she generally does not deal directly with needy families; the social service organizations distribute the diapers. However, she does get calls from mothers interested in the service.

“We get calls from mothers every day,” Hopkins said.

Those calls are gratifying, she said.

Hopkins recalled receiving a call from a social service agency trying to help a frantic mother who’d left the same diaper on her baby for 24 hours. Hopkins passed along her number to the mother and information on how to get help.

“Stories like that show that what we do provides a need,” Hopkins said. “It makes the whole journey worthwhile.”

She is a person who doesn’t mind going where others might turn up their noses. The Diaper Bank is Hopkins’ second job, and it is unpaid.

Her day job, she with a chuckle during a telephone interview while on a work break, is working as a client service representative for a nuclear waste company.