By Maria Saporta
Published in the Atlanta Business Chronicle on October 26, 2012

Atlanta native Stacey Stewart has become the first-ever president of United Way USA — the No. 2 leader within the international organization.

Stewart reports to Brian Gallagher, CEO of United Way Worldwide, who worked for the United Way of Greater Atlanta from 1990 to 1996.

The move is part of a restructuring of the national and international United Way organization, which was put in place in 2009 when Atlanta businesswoman Ann Stallard was chairing United Way’s board.

Under that reorganization of United Way of America and United Way International, a more formal relationship was instituted that created United Way USA — the largest entity within the United Way Worldwide organization.

In a telephone interview on Oct. 23, Stewart acknowledged the Atlanta ties to United Way. 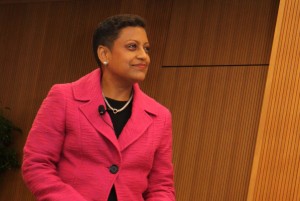 “There are a lot of really strong and long-term relationships,” Stewart said, mentioning Atlanta-based United Parcel Service Inc., The Coca-Cola Co. and SunTrust Banks Inc. in particular. “We have such a strong base of corporate support from Atlanta.”

Stewart, who grew up in Atlanta, is the daughter of former Atlanta City Councilwoman Myrtle Davis, who she telephones almost every day.

She has spent most of her career outside of Atlanta, first working in investment banking in New York before joining Fannie Mae, where she spent 17 years serving as its chief diversity officer and senior vice president for the Office of Community and Charitable Giving as well as president and CEO of the Fannie Mae Foundation.

In June 2009, Stewart joined the United Way organization, becoming its executive vice president of Community Impact Leadership and Learning for the worldwide organization.

That was just one month after Stallard had taken over as United Way’s board chair.

“This is a wonderful place for Stacy and her talents,” Stallard said in an interview. “She is a strong visionary and a formidable woman who can bring groups of people together for the common good.”

Stallard attributed Stewart’s ability to bring “disparate groups together” to “her Atlanta roots.”

“I do think there’s a specialness in the water and air here,” Stallard said. “That is the talent she brought to the national level. United Way USA is the largest partner in our intelligence network of United Ways worldwide.”

United Way Worldwide is a $5 billion organization, and United Way USA represents $4 billion of those contributions, Stewart said. To put it a different way, there are 1,800 United Ways worldwide, and 1,200 of those are in the United States.

Myrtle Davis, who served on the Atlanta City Council from 1981 to 1993, could not be a prouder mother.

“I’m very excited about her moving up and getting this promotion,” Davis said. “She has had a lot of experience with nonprofits, and most of my efforts have been with nonprofits.”

For Stewart, it has always been about making communities stronger.

“I have always believed that United Way — its resources and its influence in the nonprofit sector — has the ability to make a difference in communities more effectively than any other organization I’ve been involved with,” Stewart said. “It brings different sectors of the community, businesses, other nonprofits and other civic leaders to work together on solutions.”

Stewart calls it “collective impact,” which has been one of the strategic goals of United Ways across the country. They have become more impact-driven organizations focused on the areas of education, financial stability and health rather than just being known for their workplace giving campaigns.

“These problems can never be solved by one sector alone,” Stewart said. “Collective impact is about how you convene different groups and how can we pool our resources. United Way can be the entity that pulls people together.”

Stewart, 48, also credits her mother and father for instilling in her a desire “to make our communities better” — which is at the core of her role at United Way.

“I’m totally excited about it,” Stewart said. “We have done relatively well in a tough economy. Despite those economic headwinds we are still making a difference.”