Midtown resident David Settlage has two new accomplishments under his belt — a summit to the highest point in Africa and completing a successful fundraiser. 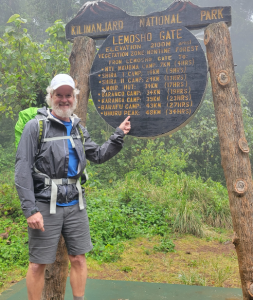 Day One at the start of the Lemosho Route. (Photo courtesy of David Settlage.)

Settlage recently returned from his climb up Mount Kilimanjaro in Tanzania — a longtime personal goal — and used the opportunity to raise over $20,000 for the Piedmont Park Conservancy. He’s helped out with Conservancy fundraising efforts for about a year.

Settlage has lived in Atlanta for about 30 years, moving to the heart of Midtown several years ago. He visits Piedmont Park daily and is so well acquainted with the 185-acre greenspace that he sees it as an extension of his home.

“A number of people have asked me, ‘Why did I do this?’” he said. “My answer is, ‘Why not?’ I go to the park literally every day, and it’s like my backyard. That was a no-brainer for me.”

Piedmont is Atlanta’s second-largest park, with an annual operating budget of about $4.5 million, but 95 percent of its upkeep is funded by private donors according to the Conservancy. Settlage’s climb was entirely self-funded, so all proceeds will go to the Conservancy. The team is free to use the funds at their discretion, he said. 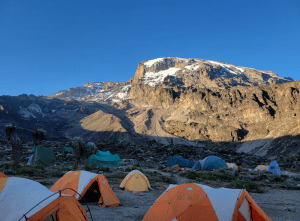 At night, the group could see the Milky Way. (Photo courtesy of David Settlage.)

A love of nature runs in the family, and Settlage’s daughter Sarah said she helped introduce her family to the iconic Midtown park.

“I went to Georgia Tech and introduced my family to Midtown,” she said. “[Eventually,] going to Piedmont Park became part of our family’s go-to weekend activities once my parents moved into town. It’s definitely been a special place to our family.”

To celebrate his dual accomplishments, family, friends and donors gathered in the Club Room at Settlage’s building on Thursday, July 21 to hear about his Tanzanian trek. 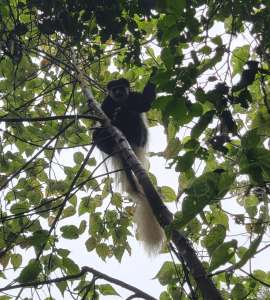 Settlage began his eight-day climb on June 27, taking the 42-mile-long Lemosho Route, which is considered the most scenic course on the mountain. Only two hours into his climb, Settlage was greeted by colobus monkeys hanging from the treetops.

“Those guys get really noisy at night,” Settlage added with a laugh.

Even with the help of guides and porters who carry most of the group’s gear, the climb can be rather difficult and Settlage explained that taking slow, deliberate steps is key.

“One of the Swahili words, ‘polepole,’ you hear a lot — ‘slowly, slowly,’” he said. “It’s not even a full footstep. One of the keys to climbing is that very slow pace.”

On the second-to-last day, the group began their summit around midnight. It’s customary to summit mountains overnight because bad weather tends to roll in when the sun is up and leaves more daylight in case a rescue is needed.

The group made it to the summit — around 19,341 feet — by sunrise, exhilarated by their accomplishment and braving the extremely cold temperatures that hung around five degrees Fahrenheit. With windchill, it reached the negatives. 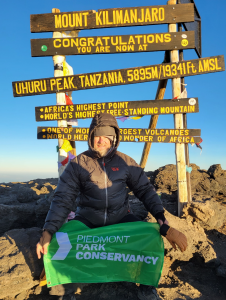 On the summit, Settlage made sure to pay homage to his favorite hometown park. (Photo courtesy of David Settlage.)

At the top, Settlage planted a Piedmont Park Conservancy flag as an ode to his hometown.

As an avid climber with a strong love for the natural world, Settlage is proud he was able to accomplish a longtime goal while supporting his favorite park. Settlage is still accepting donations for his fundraising campaign, so those interested in donating or seeing more snapshots from his climb can click here.