Atlanta's 2011 pension reform efforts cast a pall in 2013 over the budget negotiations with employees representatives during negotiations over the proposed budget that was to take effect July 1, 2013. Credit: David Pendered

Atlanta’s pension reforms in 2011 helped set the foundation for a court ruling in Hall County that supported Hall County’s defined contributions benefits plan and eliminated a potential payment to employees of more than $75 million. 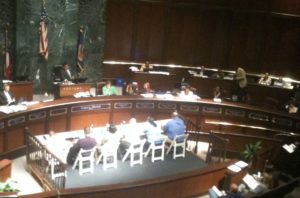 Atlanta’s 2011 pension reform efforts cast a pall in 2013 over the budget negotiations with employees representatives during negotiations over the proposed budget that was to take effect July 1, 2013. Credit: David Pendered

The ruling was deemed a credit positive event for Hall County by analysts with Moody’s Investors Service. The county had been looking at a liability in excess of $75 million. The county’s entire annual operating budget is barely twice that amount – $166 million, according to a report by Moody’s.

Atlanta’s precedent-setting role came in the form of the city’s 2011 pension reform effort.

The effort may seem like ancient history: Pension liabilities are not now the subject of rampant discussion, as they were in the wake of the Great Recession. Back then, fears ran high in the retiree sector as the global crash undercut investment returns on which pension funds relied to meet withdrawal demands of pensioners.

Even in today’s seemingly robust global economy, Hall County’s existing pension plan investments are projected to provide long-term returns at rates of 1.97 percent and 3.07 percent, net of inflation. These are the rates for two funds that represent a total of 60 percent of the pension fund, according to notes in the county’s Comprehensive Annual Financial Report, for the year ending June 30, 2019.

In 2011, then Mayor Kasim Reed’s administration and the Atlanta City Council battled for months over reform efforts intended to increase the solvency of pensions for the city’s police, fire and general employees. A settlement was reached and employees saw big changes in their paychecks.

Here’s how two lawyers with Morris, Manning & Martin described the change in a piece published in the November 2015 newsletter of Georgia Association of Public Pension Trustees:

Atlanta employees filed a lawsuit in 2013 in Fulton County Superior Court in an effort to overturn  the city’s reform program. A judge upheld the program, as did the Georgia Supreme Court in 2015 – upon an appeal of the lower court’s ruling on alleged violations of the state Constitution and alleged breaches of employees’ contracts.

The piece by the two lawyers with Morris, Manning & Martin predicted the ruling would have ongoing effects on public pension programs in Georgia:

Atlanta’s independent auditor, Amanda Noble, is in the process is conducting actuarial audits of Atlanta’s three pension funds. The city retained Deloitte to do the work. The audits were to have been delivered late last year, according to a schedule.