Work is progressing on the National Center for Civil and Human Rights, even if it’s not physically apparent on the site.

On Tuesday morning, Doug Shipman, CEO of the Atlanta-based Center, presented a sneak peak of how the exhibitions will be displayed when the Center opens in the spring of 2014.

The official ground-breaking for the Center took place in late June, but almost nothing has happened on the site since then. A grassy hill bordered by green construction fencing outlines the site, which is positioned on the same block as the Georgia Aquarium and the World of Coca-Cola.

Shipman, however, said that the Center has just received its Special Administrative Permit from the City of Atlanta. Now it is finishing up all the construction documents by early 2013. 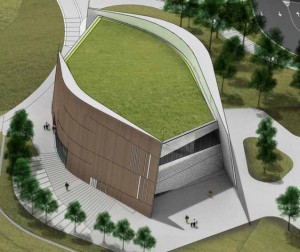 Rendering of the National Center for Civil and Human Rights

“We will get the building permit in February, and you should be seeing cranes on the site by the end of February,” Shipman said. “That’s consistent with our time schedule to open in May of 2014. We should get a temporary occupancy permit that March so we will have two months to move the King papers and have some test tours.”

The new design of the Center will be a bit smaller than originally envisioned so the attraction could open debt free. The revised design now has exhibits on three levels.

The ground level will face Ivan Allen Jr. Boulevard, and it will be accessible for special events. On that level, there will be a rotating collection o f the papers of Civil Rights leader Martin Luther King Jr. that is permanently housed on the campus of Morehouse College.

The second level of the Center will include the main entrance to the Center, which will face Centennial Olympic Park. On that level, there will be several exhibits featuring the civil rights movement, starting chronologically with the period just before the Brown versus Board of Education ruling by the U.S. Supreme Court.

The third level will focus on human rights — and it will feature current day challenges that exist throughout the world.

The cost of the total project has slightly increased with the addition of a new water feature or fountain at the main entrance. Atlanta Mayor Kasim Reed felt it was critically important to have a water feature as part of the development.

The total project cost is now $75 million with an endowment and with the fountain.

The Center will have a total of 42,000 square feet, with 6,750 square feet for the civil rights exhibit; the human rights will take up about 4,100 square feet.

It is also expected that the Center will attract about 350,000 visitors a year. By comparison, the Georgia Aquarium has about 2.5 million annual visitors; and the World of Coca-Cola attracts about 1.1million. The top ticket price will be $12, which is lower than most other attractions in town.