Dignitaries attend the ground-breaking event for the expansion of the Center for Civil and Human Rights. (Photo by Kelly Jordan.)

When the National Center for Civil and Human Rights held a ground-breaking ceremony for its expansion on Oct. 14, it had only raised $27 million of the $50 million project. The expansion, which will include the building of the East and West wings, will add another 20,000 square feet to the 42,000-square-foot facility. Thanks to an $8.5 million grant from the Robert W. Woodruff Foundation and a few other gifts, though, the Center has raised $37.3 million. 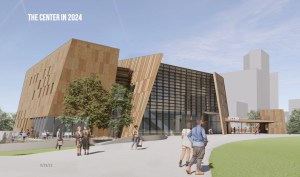 A rendering of the West Wing addition to the National Center for Civil and Human Rights. (Special: NCCHR.)

That means the Center likely will build both wings of its proposed expansion during this capital campaign. At one time, it seemed as though it would have to phase the two wings.

“The Woodruff grant makes us feel confident we can build both wings,” said Jill Savitt, president and CEO of the Center said during a Monday interview. “It was not a sure thing. Now we think we can build it all.”

Still, Savitt was focused on the job at hand.

“We have $13 million to go,” she said while thanking Woodruff, the Georgia Pacific Foundation and the Zeist Foundation for their recent gifts. The major donor to the capital campaign so far is the Arthur M. Blank Family Foundation, which has given $17 million towards the project.

The goal is to complete the expansion with the two wings by June 2024, the 10-year anniversary of when the Center first opened.

Atlanta is what it is because we were the epicenter of the Civil Rights movement,” said Russ Hardin, president of the Woodruff Foundation. “We must remember that story and tell it well. The Center does just that.”

The $8.5 million gift is in addition to a $1.5 million grant the Woodruff Foundation made to the Center following the murder of George Floyd. The foundation provided that grant so the Center could develop two training programs – human rights training for law enforcement agencies as well as diversity, equity and inclusion training for corporations and major employers.

Both training programs will generate $1.1 million in new revenues in 2022, half of which will be net proceeds.

“NCCHR provides world-class programs for corporate employee groups and for law enforcement professionals,” said Hardin, who added both training programs are getting traction. 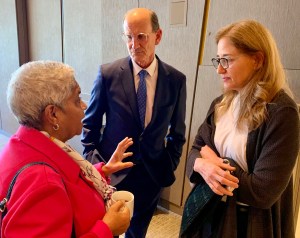 Shirley Franklin chats with A.J. Robinson and Jill Savitt before the groundbreaking on Oct. 14. (Photo by Kelly Jordan.)

A.J. Robinson, president and CEO of Central Atlanta Progress, and former Atlanta Mayor Shirley Franklin began nurturing the vision and development of the Center more than 15 years ago.

The initial project for the Center was launched at the time of the 2008 recession, which ended up having to scale down the plans. Then the campaign for two-wing expansion was launched in October right when there was talk of another recession.

“This expansion really fulfills our original vision from back in 2008,” Robinson said at the ground-breaking for the two wings. “We do a lot of things right, but timing is not one of them.”

In a follow-up interview, Robinson said the Woodruff grant greatly enhances the Center’s ability to finish the campaign.

“We are all much more optimistic that we will be able to close the gap in the next couple of months,” Robinson said. “This institution, because of its location and because of the work it does, captures the past, present and future identity of Atlanta in a way that we should all celebrate.”

Documentary filmmaker Ken Burns spent two days at the Center to get inspired. The Women’s March gathered at the Center on Jan. 21, 2017, before heading to the State Capitol. On the Thursday night before the 2019 Super Bowl in Atlanta, Arthur Blank held a special dinner for NFL owners at the Center.

Most recently, when a site selection team for the 2024 Democratic National Convention came to Atlanta a few weeks ago, they met at the Center.

“Speaker after speaker talked about how important the Center is to Atlanta,” Robinson said. “We have become a relevant part of Atlanta’s eco-system, and we are only eight years old.”

“Since its founding in 2014, the National Center for Civil and Human Rights has been a beacon for change,” McBath said at the ground-breaking. “I want to congratulate the Center for inspiring everyday Americans, especially the young people who might not know the history of the civil rights movement.” 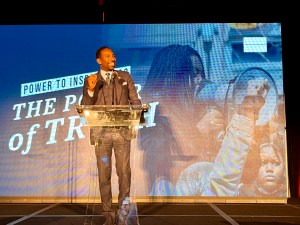 Atlanta Mayor Andre Dickens speaks of the importance of the Center at its annual gala – the Power to Inspire Awards – on Oct. 13, the night before the groundbreaking. (Photo by Maria Saporta.)

Andrea Young, who serves on the board of the Center, credited the “dynamic duo” of Robinson and Franklin for getting the development off the ground. Franklin has chaired the Center’s board since its inception.

“No place tells the story better than the National Center for Civil and Human Rights,” said Young, who added that the goal is to inspire people. “This is also an anchor of brand Atlanta and its tradition of inclusion, diversity and tolerance. It helps keep the spirit of civil and human rights alive.”

For Savitt, the Woodruff grant is an “endorsement” of the Center’s work. “It says the project has been vetted and that they believe we are ready for this growth,” she said. “It sends a message to the community that this is a project worthy of investing in.”

Atlanta Mayor Andre Dickens, a long-time supporter of the Center who loves bringing young people to learn about the city’s special history, said it best when he said: “The Center really does represent the best of our city and how to move Atlanta forward.”