At the 1992 World Series in Atlanta, the color guard hung the Canadian flag upside down

Next month, the Summer Olympics once again will show who we are – as a country — through sports. 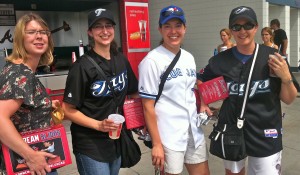 Last weekend, the Atlanta Braves’ home stand once again offered a reminder of one country’s grace and civility in competition – and a story of one Georgia woman’s transformed understanding of that same nation, Canada.

At Turner Field, last weekend served as a paean to Sid Bream’s famous slide that sent the Braves to the 1992 World Series. Their series opponent was back in town — the Toronto Blue Jays, whose fans in 1992 got a chance to show their character when Atlanta botched a basic national symbol: flying a flag.

Atlanta was ramping up to host the 1996 Olympics, boning up on decorum and international etiquette. Those stakes gave the media plenty of reason to pitch a fit when a color guard at old Atlanta Fulton County Stadium unfurled the Canadian maple leaf  —  upside down.

At the 1992 World Series in Atlanta, the color guard hung the Canadian flag upside down

Imagine that happening to the U.S. flag. Even before the post-9/11 patriotic fervor, would Americans simply let that go as an unintentional slight to Old Glory?

“I don’t think that many Canadians noticed until it was pointed out to them,” said Carrie Cruickshanks, who attended a Jays-Braves game with three friends from Ontario. “A lot of them probably just had another beer. It’s more laidback… Canadians are very patriotic, but we aren’t as flashy about it.”

Canada gave a collective shrug to the incident. A Toronto baseball blogger, The Blue Jay Hunter, recapped the fiasco in a straightforward tone.

“Depending on who you talk to, it was either a great disrespect or a simple mistake,” he wrote recently. His post includes a Toronto Star front page with the headline, “5-4 win answers foul-up over flag.”

[After publication of this column, a reader from Atlanta, Major General Larry Taylor USMCR (ret.), reported the following took place behind the scenes and at the following game in Toronto:

“Canada did not really respond with ‘a collective shrug.’  In fact, by agreement with the US Marine Corps, who provided that color guard, Canada pro-actively defused the entire situation in, yes, an ‘inspiring’ way.

I was at that game.  Next day, I was having lunch at Marine Corps headquarters in Washington.  The then-Commandant of the Marine Corps, General Carl Mundy (who is from Atlanta, btw), came in, sat at our table and said, “well, I just got off the phone with Prime Minister Mulroney.”  He said he thought they had resolved the flap, but did not reveal exactly how.

Next game, in Toronto, a combined color guard appeared: The US Marines carrying the Canadian flag (properly), and the Royal Canadian Mounted Police carrying the US flag.  Brilliant!”]

Part of the “Keep Calm and Carry On” attitude of fans may carry over from their Commonwealth roots. That’s what Dana Thompson, a Canadian sports fan transplanted to Georgia, says. 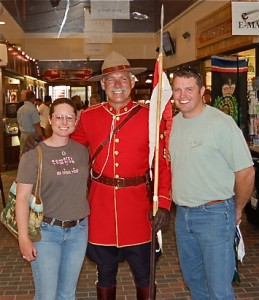 “Part of my family is British, and it’s a very British thing to do things quietly and unassumingly, and do the right thing because it’s the right thing to do,” said Thompson, 40, a web designer and manager. “It’s not polite to brag and overly celebrate something that you have won. Down here, you win and people are shouting from the rooftop. It’s not rude – it’s awesome.”

Thompson experienced a transformation in both her citizenship and her understanding of patriotism. The 1992 flag flap in Atlanta was a signpost on that journey.

“I was 20 at the time and watching the World Series in Buffalo, N.Y. where I was going to college,” said Thompson, who spoke by phone from her home in Rome, Ga. “I remember thinking it was just another example of how Canada never seems to get any respect.”

The funny thing is she didn’t respect Canada like she does now that she’s gone. Born and raised in Toronto, she loved the United States.

“What drew me to the United States was that I always thought the States were so much more patriotic and vocal about it,” she said. “The United States held a mystique, that it was very patriotic and a lot more competitive. When I watched the Olympics, I thought, ‘Man, the United States is so much better than our team. They win so many more gold medals.’ That’s where I wanted to live and I still feel that way.” 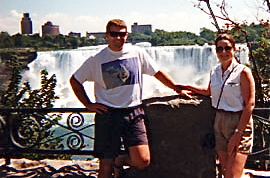 Niagara Falls symbolizes Canada and America flowing together. Dana and Scott Thompson took this photo in 1999 on his first visit to Canada, where she grew up loving the United States.

She was thrilled when at 18 her family won an immigration lottery to move across the border.

Near the end of high school and her life in Canada, she was in a fashion show capped by flags of many nations carried down the runway.

“I should have been deeply honored to carry the Canadian flag, but I was totally bummed out and traded with my best friend to carry the U.S. flag,” she recalled.

Thompson achieved U.S. citizenship in 2007. By then, she had begun to see the quieter strength of her birth country. Distance shone a new light on national values of kindness, forgiveness and willingness to offer the benefit of the doubt.

She admired how after 9/11, Nova Scotia residents cared for passengers of planes diverted from the United States. “They do great things and the right things but not to get recognition,” she said.

Then came the 2010 Winter Olympics hosted by Vancouver. 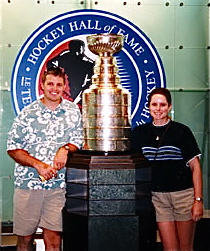 Dana Thompson and husband Scott, who live in Georgia now, visit the at the Hockey Hall of Fame in Toronto in 1999.

“I had such a sense of pride about what a great job the Canadians did,” she said.

“The final hockey game against the United States, I wanted Canada to win so badly that I thought I might throw up. When they won, I felt such a sense of pride and joy because I knew how much that meant to them. I thought, ‘I really am still a Canadian.’ “

Speaking of hockey, she and other Canadians made one point clear about mistreatment of their flag. Atlanta was fortunate that the snafu occurred during our national pastime and not Canada’s.

“When it comes to sports, we are certainly a hockey nation first,” Cruickshanks said.

If the maple leaf ever flew wrong at the Stanley Cup, fans might never forget.

“My husband is from Marietta, and he’s commented that hockey is even more a passion in Canada than football is in the South,” Thompson said.

Note to Sochi, Russia, which will host the 2014 Winter Olympics: a proper Canadian flag flies leaf tip up.

Michelle Hiskey is a writing coach based in Decatur. She can be reached at michelle.hiskey@gmail.com