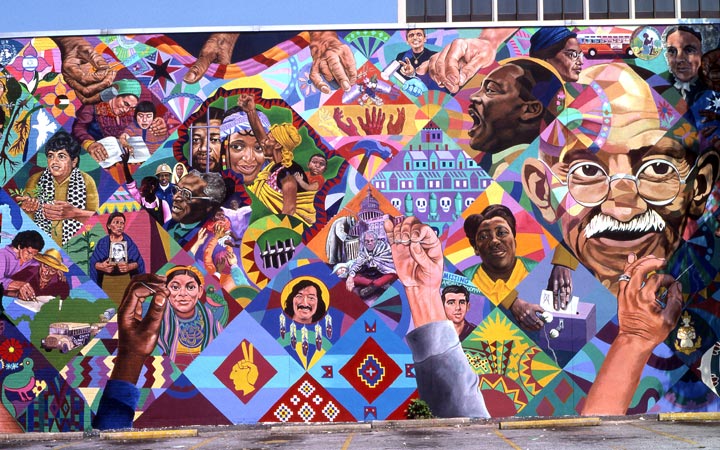 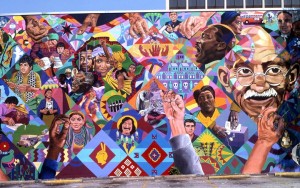 “My office overlooks the site of the former American Friends Service Committee building, at the corner of Piedmont Ave. and John Wesley Dobbs,” Hopkins wrote.  “I thought you might want to bring attention to the fact that the Freedom Quilt Mural was demolished along with the building last week.  Such a loss is a shame.”

Hopkins, who works for Citizens Trust Bank, then sent demolition pictures that he had taken from his office.

After reaching out to a few historic preservationists in Atlanta, they said they had not been aware that the building and the mural were about to be torn down.

The property is owned by Georgia State University, and it previously has been reported that the university was planning to build additional student housing on the site.

It is not known whether there had been any attempt to preserve or relocate the mural.

The Freedom Quilt Mural was designed and completed in July 1988 on the American Friend Service Committee Atlanta office building by artist David Fichter with the help of many volunteers.

A website called: Rescue Public Murals – Heritage Preservation, had identified the 1988 Freedom Quilt Mural about the Civil Rights Movement as being threatened.

“Georgia State University now owns the building and may raze it,” the website stated several years ago. “During the assessment day, the artist, community leader, Bill Fleming, and Heritage Preservation representative were also able to visit this mural.”

It is ironic that in Atlanta, the cradle of the Civil Rights Movement, that such a mural would be demolished with no public effort to save it.

Thank you Joseph Hopkins for letting us know and documenting the disappearing act. 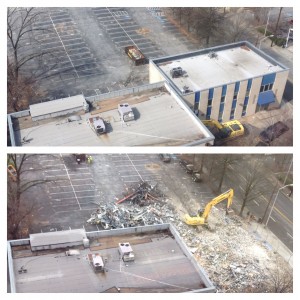 Demolition of the AFSC building with the Freedom Quilt Mural (Photos: Joseph Hopkins)