Ever since the popular Music Midtown festival disappeared after the 2005 season, Alex Cooley wanted to bring it back.

Cooley, who was the inspiration and founder of the “legacy” Music Midtown, believed Atlanta’s music scene would never be complete without an annual festival that attracted both known and unknown artists.

“It’s very important for Atlanta to have a music festival,” Cooley said in a telephone interview on the same day that plans for a “new” Music Midtown was unveiled. “If you go back, I wanted this to be a festival that lasted for 20, 30, 40 years.”

Cooley is the true godfather of concerts and music performances in Atlanta. He literally introduced Atlanta to the national music scene, and vice versa. 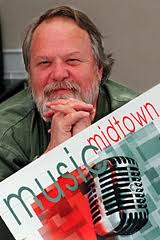 For the past several years, Cooley explored the idea of bringing back Music Midtown. And then earlier this year, he got the word from contacts in the business that his former partner, Peter Conlon, who is president of Live Nation Atlanta, was already on the case.

Music Midtown will make its comeback in Piedmont Park on Sept. 24 (and perhaps the evening of Sept. 23) with an all-day extravaganza of music culminating with Coldplay, one of the most revered bands of the modern scene.

Cooley said he was not aware of any of the specifics of the revised Music Midtown, but he hoped it would remain true to the original vision that he had had for the festival.

“Music Midtown turned out to be what I wanted it to be, which was an urban festival that brought people who don’t go to many concerts and expose them to all kinds of music,” Cooley said. “Music Midtown turned out to be a place where you could see all kinds of music, from Tony Bennett to the Gypsy Kings. I thought that it was very important to have a big variety.”

At its peak, Music Midtown had six stages that included major well-known artists as well as those who were emerging on the scene. There was an international stage that showcased Latin and African music among other genres.

“I think it’s very sad that people latch on to one small slice of music and listen to that to the exclusion of other kinds of music,” Cooley said. “We wanted to make sure that Music Midtown had something for everyone.”

And just as important to Cooley was introducing new acts to new audiences.

“When I was totally connected to the music industry, you would start hearing about groups long before they had broken out,” Cooley said. “It was wonderful to be able to bring them to Atlanta so they could be known.”

Bringing Music Midtown to Piedmont Park also holds a special place in Cooley’s heart. Cooley really got his start by putting on free concerts in the Piedmont Park bandstand across from the bathhouse. He brought the Allman Brothers, Jefferson Airplane and a host of local and national artists to Piedmont Park during the height of the “hippie” era in Midtown.

“I wanted those British bands that I listened to, to come to Atlanta, and I wanted groups from the West Coast to come to Piedmont Park,” Cooley said. “I still remember courting my wife in Piedmont Park while the Allman Brothers were playing.”

For Cooley, having Music Midtown be located in Piedmont Park would make sure another goal of his was continued — to have it be located in a “green heart” of Atlanta.

“I love Piedmont Park,” Cooley said. “I grew up there, but I’m a little worried about its limitations.”