The task of resolving Atlanta’s shortcomings in collecting yard debris has landed on the desk of Al Wiggins, the public works commissioner who’s been on the job since March 1 and has inherited a challenge that dates to at least 2011. 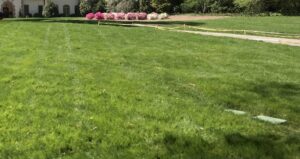 Some homes in Atlanta are placed behind lawns as free of debris as fairways of championship golf courses. (Photo by David Pendered)

Wiggins isn’t looking back. He’s looking forward, to the city hiring a private-sector contractor to provide curbside pick up of leaves, limbs and other yard debris. Atlanta’s solid waste department serves about 100,000 customers and some complain loudly that the city has shifted to a twice-a-month collection of yard debris, from a once-a-week schedule, amid a national labor shortage that has hit Atlanta’s solid waste section.

This is the fifth solution in recent months attempted by Mayor Keisha Lance Bottoms’ administration to add staff in the sanitation section. Atlanta is amid the throes of the national labor shortage, and it’s being felt across the country by entities that collect waste of all types – household, recycling, yard. Staffing challenges include competition for local truck drivers from the boom in home deliveries of online shopping; pandemic reasons for workers to stay home; and extended unemployment benefits, according to a report by the national trade group, Solid Waste Association of North America.

The issue of yard waste notwithstanding, Atlanta has been able to maintain the collection of garbage and recycled goods, Wiggins said. Wiggins cited this as his first point in a 37-minute conversation: 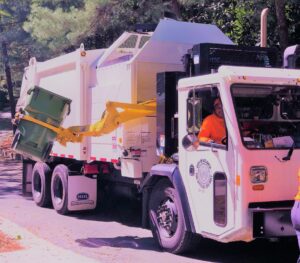 This Atlanta sanitation truck is equipped with a mechanical arm to pick up a trash can. (Photo courtesy of Atlanta’s Department of Public Works)

Wiggins didn’t mention the department’s other tasks. According to a page in the current city budget, the Department of Public Works is responsible for collecting and disposing of solid waste; waste reduction and recycling; landfill post-closure management; street sweeping; right-of-way mowing; dead animal removal; Keep Atlanta Beautiful; and helping with citywide emergencies.

Wiggins has represented the department in committee meetings of the Atlanta City Council throughout the summer, as opposed to sending an emissary. Councilmember Andrea Boone portrays the commissioner as responsive addressing concerns brought forward by constituents in her southwest Atlanta District 10.

Atlanta’s prior efforts to managing the waste collection staffing issue include:

The latest request for proposals is underway, Wiggins said. Two lawn service companies have expressed interest in collecting yard trimmings. Yard debris collection is a niche beyond the scope of most waste haulers.

“Waste haulers aren’t interested in this type of work,” Wiggins said. “There may be two bags of leaves in front of house, or an entire curbline lined with tree trimmings. The severity of items placed at curbside will determine what type of vehicle, or what method of collection, will be used.” 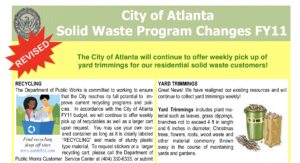 In 2011, this flyer released by Atlanta touted the weekly collection of yard trimmings, an indication of the relevance of the service at that time. (Image courtesy of Atlanta)

Waste haulers are prepared to handle a known amount and type of material, Wiggins said.

The issue of yard waste remaining on curbs is not related to broken equipment, Wiggins said. It was in 2017, according to comments by then-Commissioner William Johnson. Fleet maintenance is under Wiggins’ oversight and he said the equipment works. The issue is a shortage of workers willing to do the job, just as it is for counterparts in other cities, Wiggins said.

The collection of yard debris was an issue well before 2017, when the council rejected the commissioner’s call to raise rates to buy new trucks and address other concerns. In 2011, the city cited the continuation of weekly collection of yard waste as a benefit of the rate hike imposed that year.

This is how SWANA described reasons for the current labor shortages:

Note to readers: The Department of Public Works is hiring. For information click here.

Previous Article
Where there’s a wheel, there’s a way: One decade of breaking barriers of inclusion
Next Article
Councilmember asks top mayoral candidates to sign ‘Buckhead Pledge’ amid cityhood movement