A new book by three Atlanta urban planners examines the collaboration by public and private sectors to prepare the city to host the 1996 Summer Olympic Games. 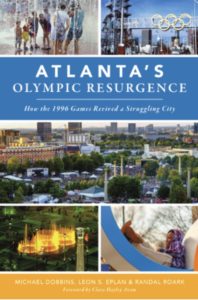 Atlanta’s Olympic Resurgence: How the 1996 Games Revived a Struggling City intends to fill a gap in Atlanta’s history. The book provides insights on the synergy established among state, city and private entities to devise and implement a $3 billion construction program for work that had to be finished on time.

Three major entities facilitated preparations for Atlanta’s games, including a state authority (MAOGA – Metropolitan Atlanta Olympic Games Authority); the City of Atlanta; and a private organization (ACOG – Atlanta Committee for the Olympic Games). It was a “messy structure,” the book contends, but yielded significant results:

Atlanta’s Olympic Resurgence grew from conversations with a Swiss student of city planning who was working on her doctoral dissertation. Margarita Sanudo had visited Atlanta in 2011 in hopes of learning details about Atlanta’s Olympics preparations, which were to be included in her evaluation of the processes used by four Olympic cities – Athens, Atlanta, Barcelona and Sydney. Atlanta was the only city among the four where she could not locate adequate information about preparations by a host city, according to the book. 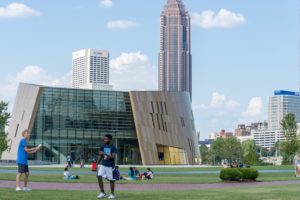 Centennial Olympic Park represents the public partnership responsible for pre-Olympic preparations for the games. The private ACOG had a vision for the park and the state’s Georgia World Congress Center assembled 21 acres of commercial properties, built the park and manages it to this day. Credit: Jeb Dobbins

Their telling focuses on the mandate of Maynard Jackson, the Atlanta mayor who supported the privately led effort to secure the Centennial Olympic Games and presided over initial planning after the 1991 announcement of Atlanta as the 1996 host city. Jackson wanted the city to realize measurable benefits from hosting the games. The book observes: 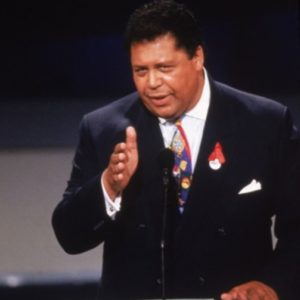 The twin mandate from the mayor’s office resulted in a complex system to oversee preparations.

The project entailed the requisite venues for competition, and accommodations, eateries and gathering places for spectators and visitors. The second peak of Jackson’s plan envisioned the retooling of public spaces and struggling neighborhoods, much of it within the three-mile circle around central Atlanta that the book notes contained “most of the Olympic venues and the city’s development program initiatives.”

Details that follow are the kind that may survive mainly in the notebooks of urban planners, and speak to the attention to detail in preparing the city for the world’s largest peacetime gathering. Atlanta’s Olympics legacy includes: 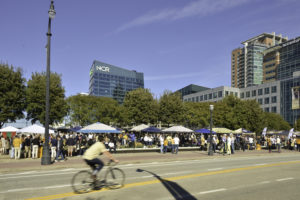 The Fifth Street Bridge, over the Downtown Connector, became a ‘tree-lined, green, well-lighted, space for outdoor events and lounging,’ through the collaboration of the state DOT, City of Atlanta, Georgia Tech and other sources, according to ‘Atlanta’s Olympic Resurgence.’ Credit: Jeb Dobbins

Atlanta’s Olympic Resurgence concludes with this look to the future: 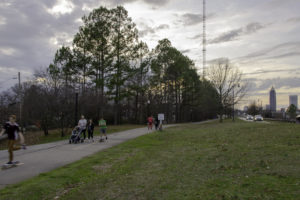 Freedom Park was completed in advance of the 1996 Summer Olympic Games with an assortment of public and private funds. Credit: Jeb Dobbins

“Atlanta’s Olympic Resurgence: How the 1996 Games Revived a Struggling City” is to be available May 3 from Arcadia Publishing. The overview page is here.

The author profiles provided by Arcadia are, in their order on the book cover: