Atlanta did not fare too well in the Trust for Public Land’s 2021 ParkScore ranking. Of the 100 major U.S. cities, Atlanta ranked 49th compared to 40th last year.

Part of the reason can be attributed to equity. For the first time, TPL added measures of park equity in its ParkScore rankings. 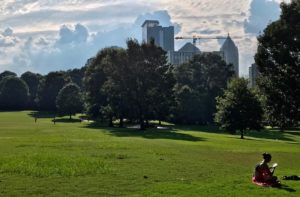 “Nobody stands still,” said George Dusenbury, the Trust for Public Lands’ state director for Georgia, of the other cities in the ranking.

Atlanta’s precipitous fall to 49th was also because the city’s parks and recreation budget remained relatively flat while other cities increased their investments in parks and moved up in the rankings.

“Across the country, we saw an increased demand for parks during the pandemic,” Dusenbury said. “It reinforced the connection between land and people.”

Dusenbury, however, was optimistic about Atlanta’s future positioning because it has been making significant investments to expand and improve its parks system. The new Cook Park, a TPL initiative with the City of Atlanta, should open within the next month or two. The city also is developing the Westside Park, site of the former Bellwood Quarry. And it bought the Lake Charlotte Nature Preserve in southeast Atlanta. Also there are ongoing investments along the Atlanta BeltLine’s corridor that will add additional green space.

The City of Atlanta also is close to completing a new 10-year parks and recreation master plan – ActivateATL – which is focusing on park equity for all Atlantans. The goal is for every resident to have access to safe, high quality parks.

But Dusenbury acknowledged that much will depend on whether the City of Atlanta will make the investments to bring the master plan to fruition. 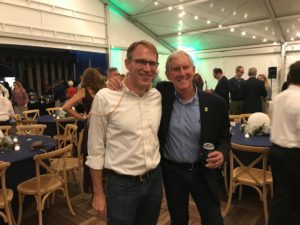 Across all ParkScore cities in the United States, equity was an issue. People of color in the 100 cities have access to 44 percent less park space than neighborhoods that are predominantly white.

The Trust for Public Land simultaneously is releasing a new report – Parks and an Equitable Recovery – which shows a significant disparity in who has access to parks in the nation’s 100 largest cities, and that disparity falls across racial and economic lines.

Atlanta also scored well in its ability to attract philanthropic dollars for its parks, but it could be even higher, Dusenbury said.

While getting public input for its new parks master plan, the City of Atlanta found that 24 percent of city residents reported that park facilities were not well maintained, which is twice the national average.

“Operation and maintenance do matter,” Dusenbury said. “The philanthropic community will invest even more when they know their investments will be maintained.”

Michael Halicki, executive director of Park Pride, said the city’s parks and recreation budget is only 1.9 percent of the total city budget.

“To rise in this ranking of peer cities, we will need to substantially increase the budget for the Department of Parks and Recreation,” Halicki said. “If we do, the residents in neighborhoods throughout our city will be the beneficiaries of this increased investment.” 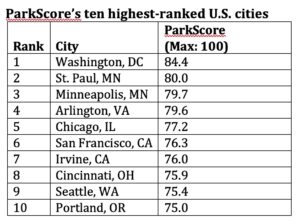 During the COVID pandemic, parks and green space have become even more important.

“Atlantans have come to appreciate the parks and green spaces in our neighborhoods,” Halicki said. “People have been using parks even more. Everyone deserves access to quality, well-maintained parks. Greater investment in our parks is warranted and validated.”

Municipal leaders often use ParkScore information to guide park improvement efforts. The report enables people to study park access on a block-by-block basis – pinpointing the areas where new parks are needed most.

When asked about his thoughts about Atlanta’s drop in the rankings, Halicki summed it up this way: “Going from 40 to 49 shows we have more work to do.” 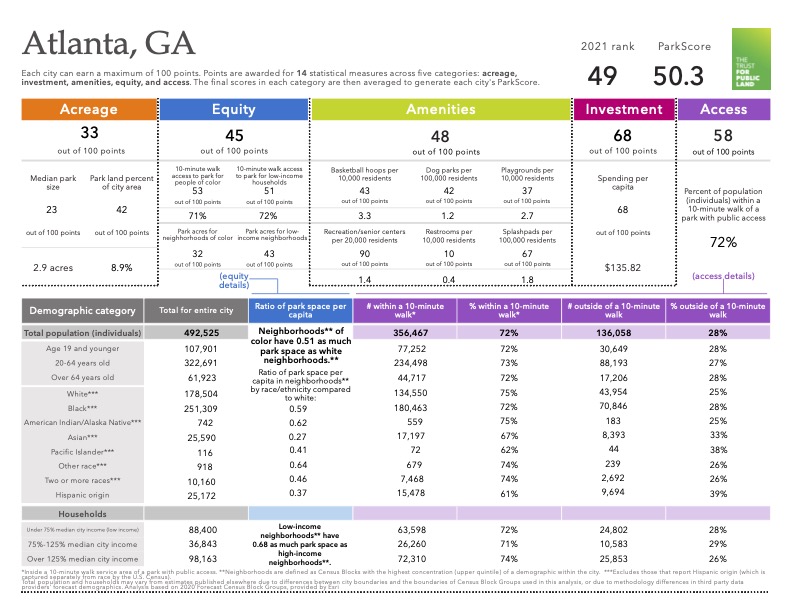 The 2021 analysis of Atlanta’s ParkScore (Special: Trust for Public Land)