A strike in 1881 by black laundresses in Atlanta was a precursor of strikes across the nation that led to President Grover Cleveland declaring the national Labor Day holiday in 1894.

The Atlanta incident unfolded a short 16 years after the conclusion of the Civil War. Atlanta was attracting all kinds of new residents, folks who flocked to join in the city’s growing economic prosperity. Black women comprised part of the influx.

The women were paid from $4 to $8 a month. They made their own soap; carried water from wells, pumps or hydrants to wash, boil and rinse clothes; and ironed the clean clothes with irons warmed by a fire, according to a report:

The fledgling protest started with 20 laundresses and within three weeks grew to 3,000 supporters. With support from black ministers, the laudresses did not flinch:

The report on aflcio.com credits two academic treatises – a book by Princeton University history Professor Tera Hunter, To ‘Joy My Freedom: Southern Black Women’s Lives and Labors After the Civil War (Harvard University Press, 1997); and an article by Carl Greenfeld, The Identity of Black Women in the Post-Bellum Period, 1865-1885, that appeared in the Binghamton (University) Journal of History (Spring 1999).

Meanwhile, the history of Labor Day as presented by the U.S. Department of Labor doesn’t mention the actions taken by the laundresses in Atlanta. Nor does it mention any of the other labor unrest that is often cited as compelling Cleveland to recognize the nation’s workers. The words “strike” and “protests” do not appear on the page. 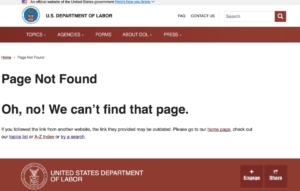 This page pops up from a U.S. Department of Labor link titled, ‘Former DOL Historian on the History of Labor Day.’ A link to the same historian from a story on forbes.com also results in an error message. Credit: dol.gov

A Labor Department website has been removed, the page titled, Former DOL Historian on the History of Labor Day. The subtext states: “Linda Stinson, a former U.S. Department of Labor historian, provided some answers to common questions about the history of Labor Day in 2011.” The link opens a page that states:

Stinson was quoted in a 2014 report by forbes.com, in which her views track others taught in at least some history classes:

Incidentally, the link provided in Stinson’s name in the forbes.com story goes to a site on the Labor Department’s site that states: “Page Not Found.”