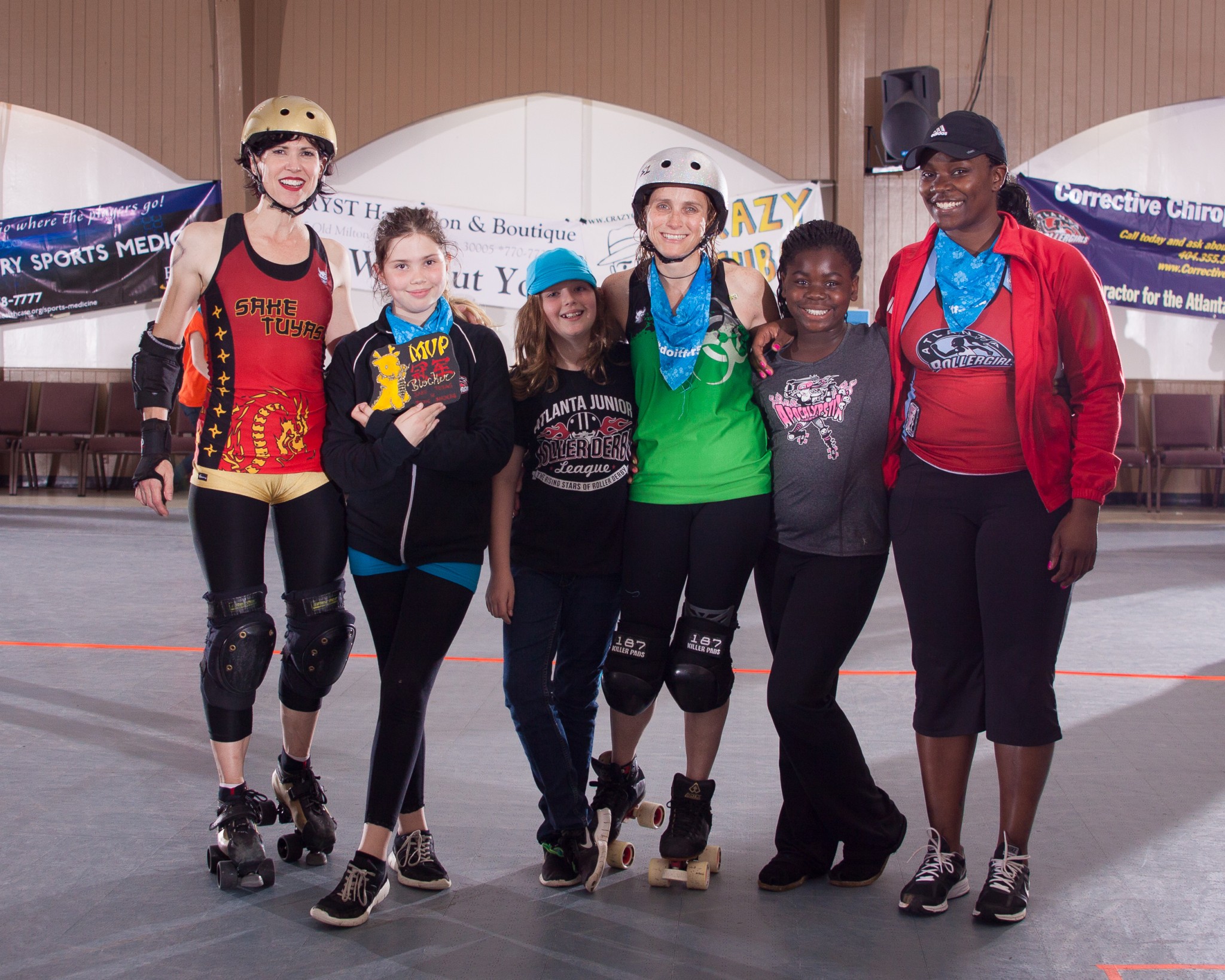 Three months after giving birth to her daughter, Maisha Polite of Dunwoody felt like something was missing in her life. She was a wife and mom with a fulfilling career, but she was always doing for others. Could she find something just for herself?

Shannon Nowlan of Kirkwood felt that void when her daughter was 3. She wasn’t sure she wanted to have another child, but something was definitely missing. What did she need? 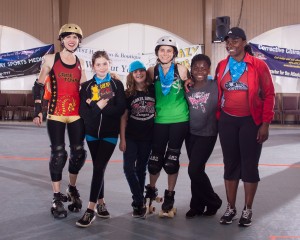 Each woman discovered her alter ego on wheels, relying on core strength, teamwork and assertiveness. They will celebrate Mother’s Day by competing in roller derby with the Atlanta Rollergirls as their daughters (who are learning the sport) and moms cheer on their fearlessness and drive. For them, the only way to circle the track is to lean in.

Polite, 39, described herself as very introverted and unlikely to try new things before she got into derby in 2005. Teams of five players compete for the most points in two fast-moving, 30-minute halves. Polite was attracted to the complexity of a sport that demands that players pay attention to both offense and defense while constantly moving in a circle. Before derby, she had been bound by certain boundaries.

“My life path had been set for me,” she said. “So often society says that you choose to get married, work in a job, raise children and be a good spouse, but not that you’ll prioritize yourself and choose to be a strong woman as an individual. That’s not a sacrifice.”

Scheduling practice time of four to 10-plus hours a week was one challenge. She worried that she might get hurt, but that fear dissolved when she got into the egalitarian Rollergirls culture—professionals, blue collar, gay, straight, a big melting pot. She discovered a place where she could lead through her business skills (she is a corporate team manager in her day job) and as a woman. Derby has been changing the conversation about what women can do, long before the 2013 publication of Sheryl Sandberg’s bestselling book on that topic,”Lean In.” 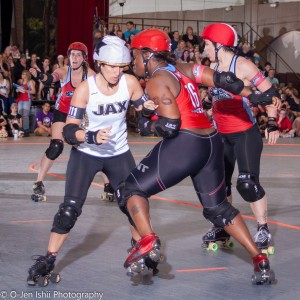 The Rollergirls “forced me to go into the driver’s seat and reinvent the way I see myself,” said Polite, who has served as president, among several roles. Part of that reinvention was splitting with her husband. “A roller derby casualty,” she said. “Once I came into my own, roller derby was an instrument of waking me up to what I needed for myself. I knew I was never going to be who I was.”

She wanted a derby name that was the opposite of her given one (Polite). She wanted something related to rap. A coworker suggested Loseyateefa. “I loved the spoof immediately,” she said. “It was an element of brutality that the sport had at the time. It was about muscling other people, knocking them down and overpowering them. It wasn’t as much about strategy involved as now.”

When her daughter was age 2, Nowlan watched a college roommate compete in derby. The sport attracted her because she had skated in middle school, but she figured she was too busy being a mom and teaching high school photography.

“As I thought about it, I realized I needed something for myself that wasn’t about being a mom or wife or having a job,” she said. “I was a fast skater and small, and thought I could get away from the big girls.”

That spark of confidence blossomed as Deathskull a nickname she had picked up randomly in college) on the Toxic Shocks team. Derby required her to pick herself back up and be assertive, and that carried over to the rest of her life. 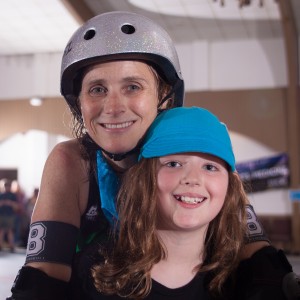 “Derby gives you the confidence that you don’t get in the real world in so many aspects: physically, emotionally and mentally,” she said. “You abandon the thought process of doing what you’ve always been told and you can put your foot down and say, ‘You can’t do that any more.’ It’s really helped me understand the process of standing up for myself.”

“I call the Rollergirls the land of misfit toys, because most of us didn’t grow up in a traditional way and most have a story to tell,” said Nowlan, 44, a former high school photography teacher. “Few of us are cheerleaders. We are kind of the undercurrent of society, who found a place with people who are like us and love to do this.”

Perhaps the most infamous derby mom is league spokesperson Michelle “Hate Ashbury” Brattain. A marathon runner from Inman Park, she got into derby through her friendship with Deathskull. Physically, derby forced her to lean in and stay there.

“You have to have an enormous amount of core strength just to hold yourself up in roller derby,” she said of the crouching and blocking positions that derby demands. “It’s a unique set of muscles that aren’t the same as running.”

She became a jammer, who scores for a team by penetrating the opposing team’s wall of skaters, and was named a bout MVP her first season. Her day job is chairing the Georgia State University history department, and her derby name comes from her academic specialty (the 1960s). 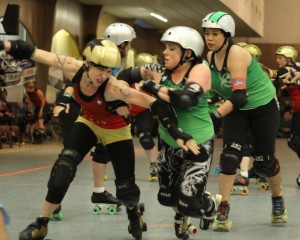 “Finding my inner aggression took me a little while,” said Brattain, who skates for the Sake Tuyas team, one of four in the league (with the Shocks, Apocalypstix and Denim Demons). “Our culture reinforces girls to be sweet, diplomatic and to get along. It’s not like we don’t get along, but it’s this giant family of some of the most competitive women I have ever met.”

The vibe around the Rollergirls April 18 bout at the Yaarab Shrine Center in Midtown was upbeat, energetic and femalecentric. The Rollergirls run their operation like a coop, with each of them and a bunch of volunteers pitching in on souvenir sales, ticket taking and welcoming fans. “Have Questions? Ask me!” said a sign carried by one of the athletes who was waiting to compete.

In the stands were the mom’s derby brats and their grandparents.

Nowlan’s daughter Elie, 10, has the derby name Electric Penguin, and her adopted niece Chloe Sittig, 17, is Bella Bruiser. Her mom Rita Sittig, 54, comes to all the bouts. Her husband Adam Nowlan is a radiation oncologist who sponsors the team as “Dr. Skully.” He is an example of the spouses and partners who take on a variation of their Rollergirl’s derby name.

Tui Brattain, age 10, is already in derby too, competing as Cat-a-Gory. Brattain’s husband, Andrew Milne, now coaches one of the teams.

“My mom is deceased, so she couldn’t see me play derby,” Brattain said. “But I say to my daughter what my mom said to me: I could do anything I wanted to do.”

“It was very important that I surround my daughter with powerful women, and see me living a life that makes me happy, and to want that in her own life,” said Polite.

The public can buy tickets at atlantarollergirls.com for Saturday’s bouts. On Mother’s Day, the league holds a closed bout for friends and family. It’s one day when they do just their own thing for themselves, and especially for the derby moms, that’s a lot of what roller derby is about.